The Leap Day of the Leap Year 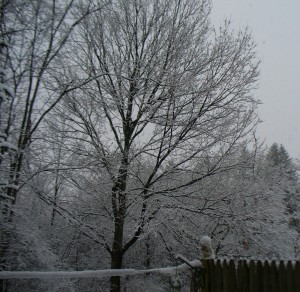 Today it is snowing. A much more typical wintry day than February 1st. Here’s what I have been doing so far today, fiber-wise:

I wove a section on my new warp, threaded once again with Young Lovers Knot, for a new batch of journals. Today I wove the section in the photo below. The blue is 22/2 cottolin dyed with woad and weld, and the tabby weft is teal 20/2 cotton, commercially dyed. When I first dyed the cottolin I was disappointed not to get a better green, but with the brighter colored tabby background it looks very nice anyway. 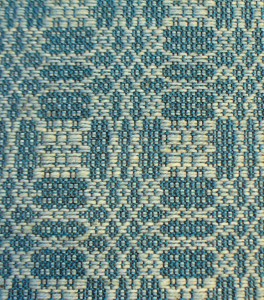 I changed the treadling for the sections where I’m using 20/2 linen or 22/2 cottolin because no matter what I do, I can’t beat it square with these yarns. With 10/2 cotton or 10/2 tencel it’s not a problem. Linen is just less inclined to submit to compression. It’s one of the things I love about linen, it has a mind of its own. And really, it’s not meant for overshot pattern weft, so who can blame it? To accommodate the linen, I shortened the square (or table) by two picks.

I wet-spun spun some bleached flax top (from Louet, not my own). It’s tow (short fibers). I did about half this bobbin today. My legs got wet, but it went with the snowy theme outdoors, so I didn’t really mind. 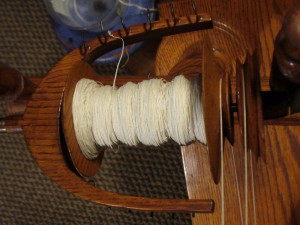 I was originally planning to spin a second bobbin and ply them, but I think I will leave it as singles and take out some of the extra twist when I wind it onto bobbins for weaving. My new plan is to spin the other half dry and then weave samples with them (using them for weft) to see if there is a noticeable difference between wet and dry spun tow.

I did the second extraction on two new dyebaths that I started over the weekend. One is madder (8 oz. roots bought from Aurora Silk a few years ago). The other is the Flavoparmelia lichens I collected this winter, plus the bark they were growing on. Since it is snowing, I heated these indoors today. Fortunately, they both smell amazing. Too bad you can’t smell them. The lichen smells like hot piney woods in the summer or a toasty fire in a cabin in the woods. The madder smells fruity, like red wine or blackberries getting boiled for jelly. 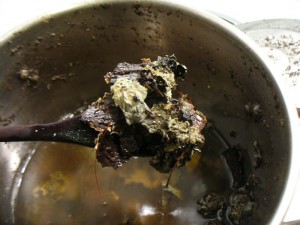 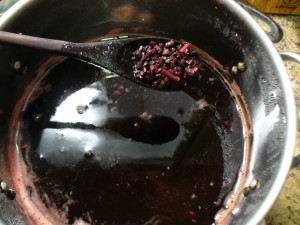 I plan to extract each one more time, then combine the extractions for stronger color. With the combined extractions, I am hoping to get a respectably rich color from the first madder bath, at least. The Flavoparmelia is an experiment, but I figure I’ll give it every opportunity to yield a strong color, if it can.

I am sticking with cellulose yarns for the time being, which are proving to be tricky. The colors are coming out lighter than I expect each time, with the exception of the CRAZY bright weld earlier in the fall/winter. Here’s how it’s looking woven up. These two photos show 20/2 linen half-bleach pattern weft with black 20/2 cotton tabby (on the black warp). 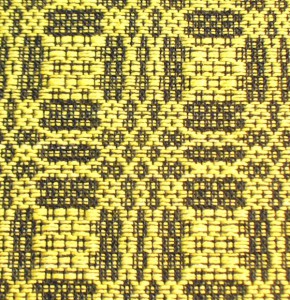 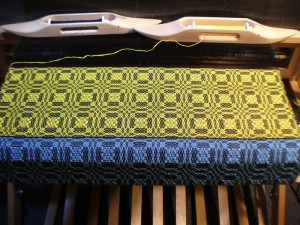 These two show the same weld-dyed yarn with a light blue 20/2 cotton tabby weft. It’s a very woady blue, but it’s commercial. (In these sections I had not yet shortened the square, hence it is rectangular.) 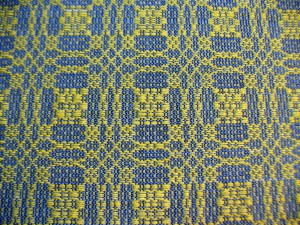 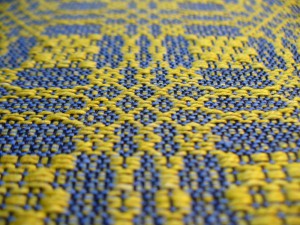 Last but not least, I have stirred up my new umbilicate lichen vats to incorporate oxygen. I will post about that separately.

It’s been great to have an extra day to work on all these projects. We should have a leap day every year.

In case you are looking for it, I just renewed Linen Heirlooms by Constance Dann Gallagher (Newton Center, MA: Charles T. Branford Company, 1968) from our local library. The author gathered and analyzed handwoven linen textiles from New England, New York state, and Pennsylvania, dating from the 19th century. Many people donated items for her study. Her book contains drafts for each of the items, based on her analysis of the cloth, some photos, and information about the donors and weavers. She also explains the operation of 19th century looms, the processing of flax, and the weave structures represented in the collection. Many of the pieces, if not all, were made of fine handspun linen yarns. (OK, not like the ancient Egyptians, but at 30-60 epi still quite fine.)

Having been a little bit obsessed with flax lately, I have really enjoyed reading it. I have been amazed and inspired by the hours of labor and creative energy that went into each piece, the care with which the pieces were saved by the families who inherited them, and the effort that Ms. Gallagher put into the study. Eventually this collection became part of the Smithsonian Division of Textiles in Washington D.C.

The author herself inspires awe, being a Master Weaver who, according to the blurb on the book jacket, “combined marriage and a career in bacteriology and various types of medical research,” along with motherhood. Her fine linen pieces won awards at NEWS (which I attended for the first time this summer!). I have also found the stories about the weavers and their families touching and inspiring.

Thankful was educated at home. At the age of 15 she was inspired by a preacher who quoted from the New Testament in the original Greek. She wanted to read the Greek scriptures, and asked the preacher if she could borrow his books. He said, “No way, José,” or words to that effect. Many years later she was able to acquire said scriptures in Greek along with a Greek-Latin Latin-Greek lexicon. Excellent! The only problem was she now had to learn Latin as well as Greek to translate the darn thing. “No problemo,” she said (or words to that effect). “I can do that while I spin, hombre!”

To give you a taste of why I find Thankful’s story so sweet, here are some tidbits from an article by Washington, VT compatriot Lena Roberts, cited in the book. “[Thankful] had a predilection for metaphysical and scientific works. She is in sympathy with Spinoza. […] She gave much attention to chemistry […]. She hatcheled and spun the flax and wove the canvas, on which she wrought in colors the combining proportions of the elements.”

Here I’m picturing a needlepoint or crewel work periodic table, and I want one.

“The study of botany, zoology and biology, with the aid of a microscope, have been pursued with avidity.” This in addition to raising a family and all the daily labors of a household. She earned $12 (which must have been a lot of cash in those days) to buy a dictionary by spinning yarn for several weeks.

According to an article from the Boston Globe in 1892, “[…] [A]fter the spinning wheel had earned the books, it had all the family to provide for. So study and work went hand in hand. The old lady would sit at her wheel, busily spinning, with her Latin grammar and her Greek grammar, and her Worcester’s dictionary propped open before her, and through the long afternoons the crooning conjugations of amo would mingle with the drooning whirr of the spinning wheel.”

OK, I’m sure this account is romanticized, but I still love Thankful Barron Taylor. Her pieces in the collection include a point twill and two 5 harness spot Bronson designs. She lived to the ripe old age of 95; December 17th, 2011 will mark the 115th anniversary of her death. Thank you, Thankful!

Many thanks to Sally and Bob Fitz of Small Ones Farm for inviting me to table at their fruit CSA pick up days on Saturday October 1st and Wednesday October 19th. It was very inspiring to meet their members, and I had many stimulating conversations about CSAs, locally sourced materials, natural dyes, local wool, flax, and vegan cloth.

At my table I displayed a basket of naturally dyed wool yarns that were mostly handspun by me, over the years, using natural dyes. For the madder, I displayed the results of a dye bath using roots from Earth Guild. (I have also bought madder root from Tierra Wools and Aurora Silk.) For all the rest, I used plants I gathered or grew myself in Amherst or the surrounding area. When I first began spinning, the most economical way to acquire a lot of wool was to buy raw fleeces. I bought and have enjoyed working with Corriedale from the former Mad Women’s Farm in Amherst, Dorset/Border Leicester cross from Natural Roots in Conway, Coopworth from Shirkshire Farm in Conway, the mixed breed flock at Hampshire College, and Romney and mohair from a few farmers I met at the Webs fleece markets. After I got tired of washing and carding my own wool, I’ve enjoyed roving from Balkey farm in Northfield and others. I also had a smaller basket of naturally dyed linen (commercial 40/2 from Webs). The yarns (and my bundle of home grown flax) were for show and tell.

And for sale, I had handbound books with handwoven cloth covers.