I wrote earlier this year that I wanted to add Amsonia tabernaemontana and Asclepias incarnata to my fiber and dye plant garden at Bramble Hill Farm. They are both bast fiber plants native to North America. Bast fibers are found in the stems of a plant (rather than around the seeds, like cotton, for example). I was introduced to the fiber potential of amsonia by fellow flax and linen study group member, Carolyn Wetzel, who brought some gorgeous, creamy-colored fibers to a meeting one night. A. incarnata was the “mystery cordage plant” from my sister’s parking lot that she helped me identify in 2012. I have finally managed to acquire both plants! END_OF_DOCUMENT_TOKEN_TO_BE_REPLACED

At long last, I have been processing some of my stash of retted and broken flax. This process is traditionally called dressing, though I am not using traditional tools or techniques. However, I am having success using a variation on a method that Chris Hammel showed me, which utilizes tools from the kitchen and hardware store, and other tools that a fiber person might have lying around the apartment.

Many of these bundles I believe were under-retted, which makes it hard to clean them. On the other hand, it’s not impossible, and I am feeling relieved not to have ruined several years’ worth of fiber.

First, I “scutch” with a flexible 3 inch putty knife on an old wooden cutting board. 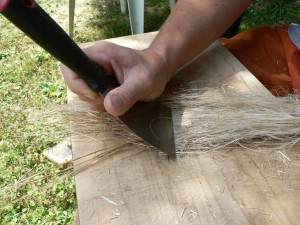 All the small branches at the top break right off at this point. I’m not sure how useful they might be for other projects because they are still attached to the woody parts of the plant and I think they would be really hard to clean. I scrape them onto the ground. Some I put into the compost, and some I save in a bag for the time being. The photo below shows a clump of tow falling to the ground. 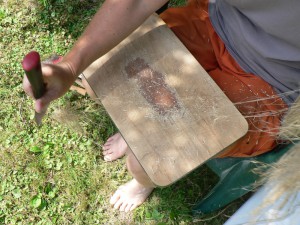 I actually split my bundles into two or three sections for dressing. The size I originally tied when I harvested, which seemed fine for drying and retting, is too thick to handle all at once. I start at the branchy end of the mini-bundle first, then work down toward the middle. Then I flip it over, start at the root end, and work toward the middle. The middle is the hardest part to clean because the fibers are denser here. I spread it out into as thin a layer as I can and scrape and scrape. This part takes a long time.

Next, I use a spiky comb-like tool that I bought at Leader Hardware here in Amherst. I don’t know what its real function is supposed to be, but it works very well as my “rough hetchel.” Chris says she uses a metal dog comb, which is probably similar. I like the fact that mine is spiky. I don’t know if the spikes really help or not, but I still like it. 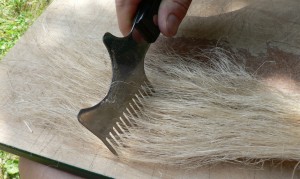 END_OF_DOCUMENT_TOKEN_TO_BE_REPLACED

Summer is rushing along, tipping noticeably toward fall. The Concord grapes are ripe and fragrant, waiting, camouflaged, to surprise passers by. “Mmm, what’s that smell? Oh, grapes!” But right behind our apartment it currently smells like a retting tank and a woad vat. It’s not “Mmm,” it’s somewhere between “Uh…?” and “Ugh!”

Here in Amherst I am happy to report that we have been having glorious weather for the past week. Flax retting, a modest amount of flax processing, dyeing, making salsa (not really in the scope of this blog, I know) are all continuing apace.

For several weeks, the majority of this year’s flax has been drying on the hay tedder in the tractor shed over at Amethyst Farm (thanks to the generosity of the Brennans). To make room to move this year’s crop gradually into the back of our car (which serves as our shed) I had to ret last year’s flax. I posted about that earlier. That is now all complete.

I retted the first batch (from our community garden) in the 50 gallon tank. I didn’t change the water at all during the retting period (from July 27th to August 2nd–six days). Here’s how the water looked when it was ready to pull out. 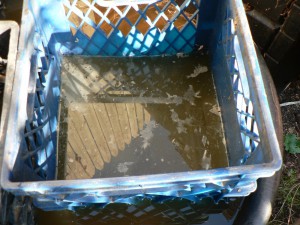 At the flax demonstration in Gilmanton, NH, Gina Gerhard had given Faith and me a tip on how to check when your retting is complete: the fiber should pull away from the stem with absolutely no resistance. 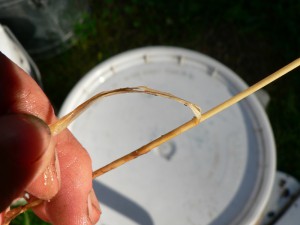 END_OF_DOCUMENT_TOKEN_TO_BE_REPLACED

Simone and I concur that our mystery cordage plant is Swamp Milkweed, Asclepias incarnata. What a name! The milkweeds are named after the Greek god of healing and medicine, Asclepius. According to The National Audubon Society Field Guide to North American Wildflowers (Eastern Region) this is “undoubtedly because some species have long been used to treat a variety of ailments.” The Latin species name incarnata means “flesh-colored,” according to the Audubon Guide. Incarnata doesn’t make it into the “epithets” list in The Hutchinson Dictionary of Plant Names: Common and Botanical, unfortunately. To me the name implies that this is the god Asclepius incarnate (made physical, made flesh, the body of the god), which is spectacular. END_OF_DOCUMENT_TOKEN_TO_BE_REPLACED

Last week I was down in Maryland visiting my sisters and seeing lots of family at a wedding. One morning, my mom and I went to consult with one of my sisters about various plants that had been planted by the previous tenants outside her apartment. In one spot we found some very intriguing dead and naturally weather-retted bast fiber from the previous year’s growth. Unfortunately I did not bring my camera so I don’t have a photo of it in situ. We don’t know what the plant is, but my sister will keep an eye on it as it develops so we can identify it. Here are some photos of the fiber and cordage. 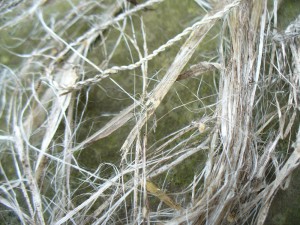 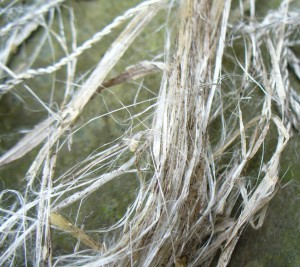 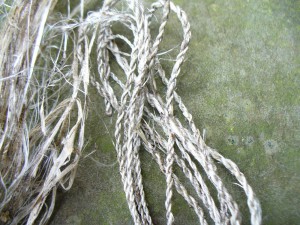 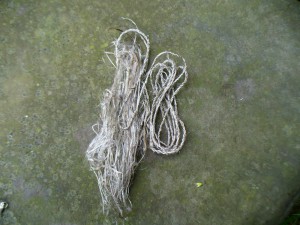 My method was this: I twisted a bundle of fibers enough to get a kink at the center, then bent the bundle in half. I used my teeth to hold the middle, and twisted both sides at the same time, between my thumbs and index fingers, rolling to the left. (That is, I twisted the left strand with my left hand, and the right strand with my right). Then I wrapped the two strands around each other twisting to the right. To add a new piece, I repeated the starting procedure, but inserted the new bent middle section into the “v” where the two strands separate. I tried to keep the two sides slightly uneven so that the splices would be staggered. I think it has a very pretty silvery quality. I would be happy to use this plant again, once I find out what it is.