Last year, 2011, I grew flax in two locations: our community garden plot and Bramble Hill Farm. The plot at Bramble Hill was about 4 feet by 15 feet. I planted on May 1st and harvested on August 1st (nice and festive). At the community garden I put in two beds 3 by 30 feet, but I got it in really late: May 29th. Also, we had the plot rototilled, rather than digging it over by hand as I usually do. Perhaps for both these reasons, it got really overrun with weeds, primarily grass. I wasn’t very pleased with the quality of the flax fiber-wise, so I decided to try saving it for seed. I let it stand much longer than I normally would have, and didn’t harvest until October 6th, which was 122 days after planting. I found to my dismay, however, that most of the seeds were immature. Later I finally learned that the flowers require pollination by insects, including bees, to be fertilized. I also found that the dry seed heads shatter easily, and a lot of the seed had fallen onto the ground before I harvested. And, thanks to close observation this summer, I can now assert with confidence that small creatures were probably eating the seeds.

So, I didn’t get any seed to speak of from the community garden plot. I did harvest a few bundles of the tallest and straightest stalks, despite their maturity, just for the sake of experimentation. All winter they sat in the car wrapped in a sheet like a dead body. On Friday July 27th I decided I’d better get on with retting them, since my very abundant 2012 crop will be ready to ret soon.

For the past few years I have used a 50 gallon livestock watering tank as my retting pond. I have used town water, which needs to off gas before you get much bacterial growth, but 24 hours or so seems to be enough.

Here’s the tank as I was filling it on Friday afternoon. 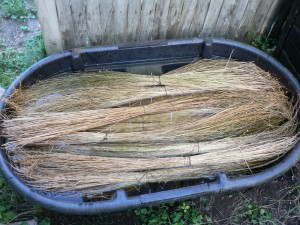 And here’s how it looked on Saturday evening. Yeasty-looking bubbles are already forming. 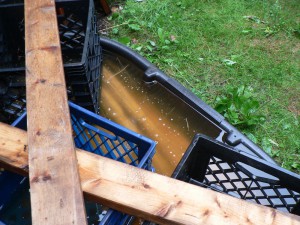 I use milk-crates to press down the flax under the water, with bricks, boards, or small buckets of water for weight.

The first couple years that I retted, I changed a certain amount of the water each day because I had read that this was necessary. Some folks recommended changing one third of the water, and others between one quarter and one half of the water, daily. I wasn’t quite clear on the reasons why, except that it prevents the tank from getting too smelly. However, I ended up with quite a few under-retted batches that I had to ret again. I now think that changing the water removes a good portion of the bacteria that are doing the actual retting. The bacteria eat up the pectins connecting the fiber strands and the woody core of the stem. Many of them are anaerobic, as I understand it, so they thrive even when the oxygen in the water is used up. Changing the water creates a more oxygen-rich environment, but (and) slows down the whole process.

Last year I decided not to change the water at all, except to top it off as it evaporated, and that seemed to work fine. So, that’s my plan for this year, also.

The 2011 flax from Bramble Hill is still sitting unretted in the car. I plan to get a second tank this year to speed things up a bit.