Back on July 16th I pulled the flax at Amethyst Farm. It was the last plot I harvested, and ideally I should have pulled it about a week earlier, judging by how many stalks were totally brown and dry by the time I got around to it. We had some extremely hot weather that put those poor plants right over the edge. But you do what you can do.

Here’s the Evelin seen from the south side of the plot. 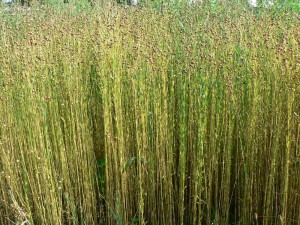 And here’s a close up of the seed capsules–many more are dark brown than I expected. 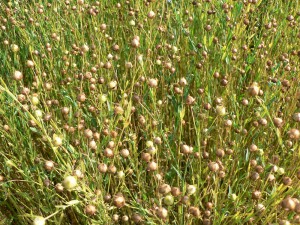 In general the Evelin was resistant to lodging, and at this plot the stalks were not affected at all. The lower leaves on the nice, straight stalks are already withered, and you can see right through the stems with no tangles. 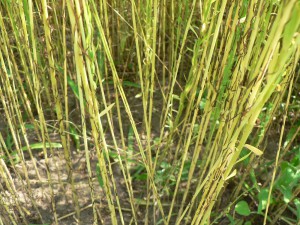 I think flax is beautiful in every phase of growth, and flax seed pods are no exception. They are gorgeous. 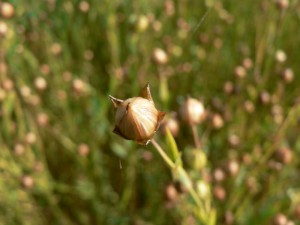 The v.n.s., as it was elsewhere, was shorter than the other varieties, with more branching, and it set a prolific quantity of seeds. 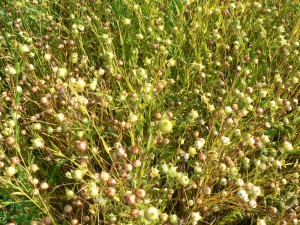 They are golden rather than brown. I am not sure how much the varieties cross-pollinated. The v.n.s. seeds are consistently light-colored in all the pods I’ve checked, but I don’t know if you can judge by seed color alone whether flax plants have crossed or not. For the purposes of fiber, this variety is not very useful, so I don’t plan to replant it anyway. 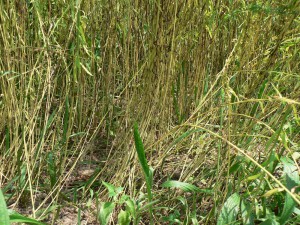 At Amethyst Farm, the vns was knocked over in the heavy rains in late June and early July, but it did a pretty good job of righting itself. Many stalks were bowed but not flattened, as you can see above, so it wasn’t too tangled. 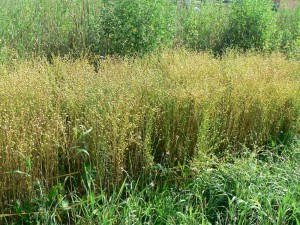 From the side you can hardly tell they’d fallen over at all. As I was harvesting, one of the barn cats came over to check things out. I believe this one is named Jasmine. 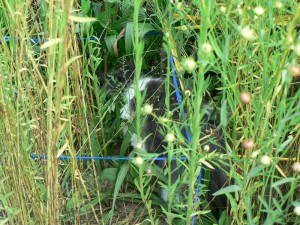 I didn’t think too much of it, but as I got to the far end of the vns plot, I found many stems on the north side of the plot that had been chewed and felled sort of like tree trunks. 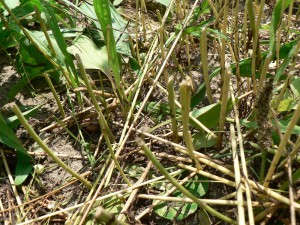 On the ground lay the drying seed pods. 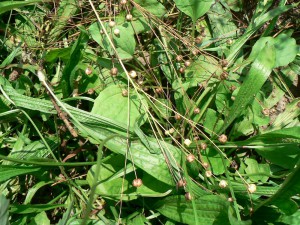 And the debris from chewed up seed pods. 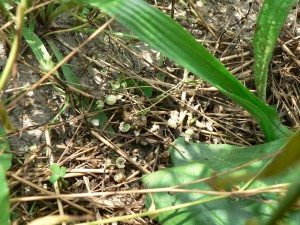 On the north side of the plot, the weeds had grown much taller so the little critters had more cover. On the south side the field had been mown for hay earlier in the summer, so the mice, voles, or whatever would have been more exposed to the hawks, cats, owls, and other predators who frequent the area. The cats were doing their best to patrol. Maybe they weren’t napping so much as lying in wait for rodents. 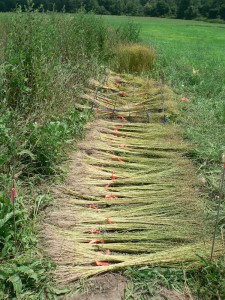 And here’s the crop from this plot all bundled up. There’s a little left at the end still to pull up in this photo. And here endeth the flax harvest phase of this experiment.