Well, I thought I was done writing about the flax harvest at Amethyst Brook, our community garden plot, but I forgot to write about the Marilyn. Partly this is due to the fact that my camera started to die around this time, and I didn’t get a lot of photos. The Marilyn, as you may recall, had been the first variety to suffer from lodging. If you don’t recall, because you’re very reasonably not obsessed with all my flax triumphs and woes, I’ll recap.

I planted the same quantity of seed by weight (4 ounces) in each plot, and each plot was the same size (4 x 14 feet). I planted all the plots on the same day (April 15th). My flax and linen study group ordered the Marilyn seed from the Brothers at the Hermitage in PA. Because it came treated, I didn’t grow this variety at the two farms who were kind enough to offer me space for my experiment. I’m not exactly sure what it was treated with, but in the past I have bought the same variety from Landis Valley Historical Museum, and both organizations import it from Holland. The Landis Valley seed was treated with Prelude 20, which is a fungicide. I’m not positive about the reasons for treating flax seed, but here are my speculations. Normally you plant flax as early as possible in the spring when the soil is cold and wet (though it wasn’t at all damp or cold this spring). One function of a fungicide might be to prevent the seed from molding or rotting under these conditions. It may also serve to kill off some diseases.

Perhaps because it was treated, or perhaps because it was higher-quality seed, or the variety is quick to get going, the germination rate for the Marilyn was much higher than the other varieties, so it came in very densely. It also grew very rapidly, especially at first. When it started to fall over in late June, I attributed the problem to over-crowding. The plants got tall and gangly, I thought, then toppled over on their own accord. At the beginning of July we had some heavy rains that knocked over my generic variety, also, and quite a bit more of the Marilyn.

So, all of this is to say that there was quite a tangle in the Marilyn bed when I went to pull it all up. Some of the plants that had fallen down early on did not continue to grow. They were bleached out and matted down on the ground. Here’s the view from the side. In the foreground are some herbs that have flowered and gone to seed including valerian, catnip, and feverfew. 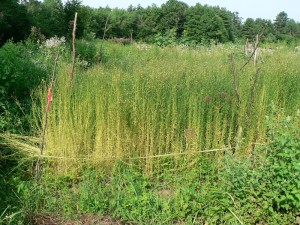 And here’s a glimpse of the tangle. 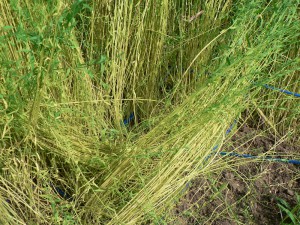 I really was impressed by the height, despite the tangles. Many stalks were well over 36 inches tall.