What is a lichen, anyway? A lichen is a symbiotic organism composed of a fungus and another organism that can photosynthesize. Fungi do not photosynthesize, that is, they do not make their own food from sunlight (and carbon dioxide and water) using chlorophyll. They are heterotrophic, meaning they get their nutrition from outside themselves. Fungi are different from plants and have their own taxonomic kingdom. The photosynthesizing organisms in lichens are different kinds of algae, cyanobacteria, or sometimes both. The photosynthesizing part of a lichen is called the “photobiont” (short for photosynthetic symbiont).

The photobiont makes sugars and other carbohydrates through photosynthesis, and allows some of these nutrients to be absorbed by the fungus. In return, the fungus provides structure and stability, some protection from sunlight, and as much consistent moisture as the habitat can provide, by conducting water through its cell walls. The fungus combined with its photobiont grows into a particular shape or structure. By itself, with identical genetic information, the fungus would not grow into this shape. The algae and cyanobacteria would not be able to colonize rocks or bark or other places that lichens grow without the fungi.

Lichens are amazingly complex, and scientists still don’t know all the details about exactly how they work. They come in a huge range of colors, textures, shapes, and sizes, and grow on lots of different surfaces (or substrates) in a very wide range of habitats. Some lichens are able to fix atmospheric nitrogen, and play a role in creating conditions to support plant life. Lichens readily accumulate minerals, including toxic compounds, are thus very susceptible to pollution. They grow very slowly. Foliose lichens (named for their leaf-like structure) like my Flavoparmelia caperata grow an average of .4-.5 mm a year. Umbilicates are also a type of foliose lichen with extra-big “leaves.” Umbilicate lichens form new cells at the center, which is why it doesn’t kill the lichen to tear off small pieces from the outside edge.

The acids and other compounds that make lichens useful for dyers serve a range of functions in the lichens themselves. Some are pigments that filter out certain wavelengths of light, some have antibiotic properties that inhibit other organisms that might compete with the slow-growing lichens, some make them taste bad so herbivores won’t eat them….

OK, I could go on and on, but if you’re interested you can read more on your own. Again, here are my two trusty references:

Lichens of North America by Irwin M. Brodo, Sylvia Duran Sharnoff, and Stephen Sharnoff. New Haven: Yale University Press, 2001. This is THE book. In addition to being an incredible and beautiful reference, its bulk makes it useful as a book-binding press, and occasionally to hold up the printer: 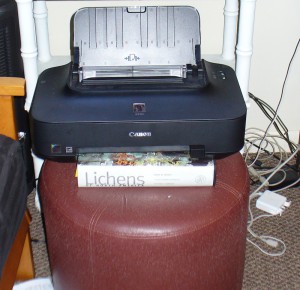