Rya is a Swedish technique for making long-pile rugs or wall-hangings. Historically, as I understand it, these textiles were used as bed-covers. The pile side faced your body in bed, and the “back” side faced up. I am weaving this one to be a wall-hanging.

The knots don’t go all the way to the selvedge. Instead, there is a small area of plain weave at each selvedge called the argatch. Here’s how I weave it: 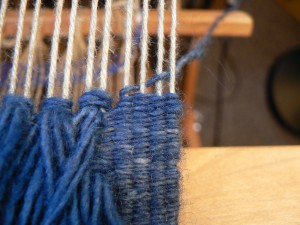 I start on the right hand side, and weave 6 picks back and forth using the outer 4 ends. This builds up a little area that is the same height as the knots. Then I tie a row of knots around pairs of warp ends. That is, each knot is wrapped around two ends. I use a guide rod or gauge to wrap my knots, made by fellow Hill Institute master weaver Lynn Fate. Here’s how I wrap the knots: 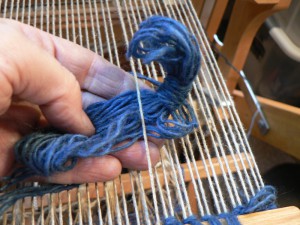 Place the guide rod with the narrow side against the warp and the wider side with the groove facing up. Take the butterfly and go between the two warp ends, and under the one on the right, as above. If it’s the first knot using that butterfly, the end just rests over the guide rod. If you’ve already tied some knots with that butterfly, the yarn will be coming up over the rod. Then pull tight, as below. 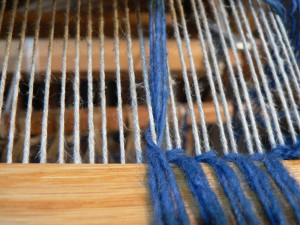 Moving to the left, pass over the left-hand end, go under it, and come up between the two ends: 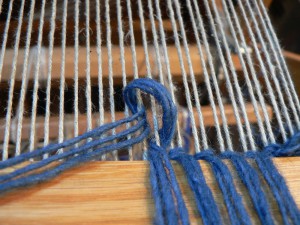 Pull the knot tight and pass the yarn under the guide rod: 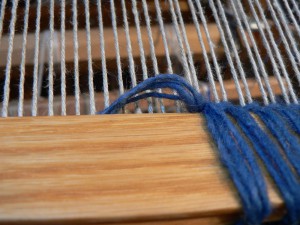 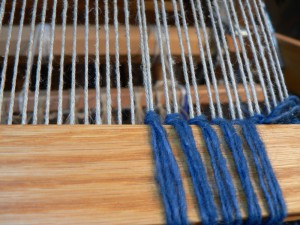 The yarn will be under the rod. Then, come up from below and begin the next knot with the pair of ends to the left. I suppose you could do this process from left to right, but for me it’s easier to go right to left.

My rod isn’t as wide as my warp. So, once I’ve tied as many knot as will fit on the rod, I tip up the rod and cut the loops with scissors. The groove lets you slip the scissor blade underneath the loop. 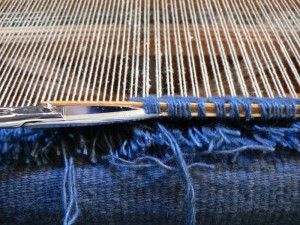 When I get all the way to the left side of the warp, I pass a weft across the width of the warp and beat it in place. 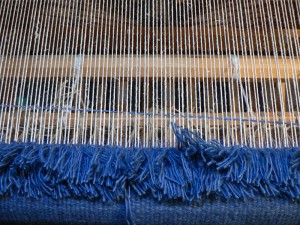 Then I do the left hand argatch: 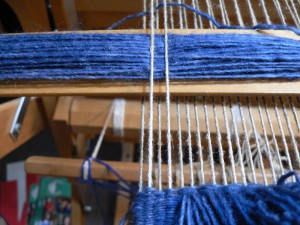 Weave plain weave using the last four ends on the left. Not including the selvedge-to-selvedge pick that holds the knots down, I weave 6 picks of argatch, and press it in with my fingers. Then I weave 26 picks of plain weave before the next row of knots. For my next rug I might weave more plain weave in between the knotted rows, since the pile is covered up a little more than I’d like with each subsequent row of pile. 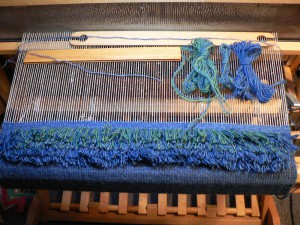