Back in December I began working on a new batch of Huck lace heart bookmarks in 40/2 linen, dyed with madder. People buy these at all times of year, but my current motivation is to have them available before Valentine’s Day.

I have a wide range of pink shades to chose from at the moment, so I plan to make a lot and have a good stash of inventory for several months. Last weekend I finished ten in a very pale pink, and this weekend I worked on ten more in a slightly darker, more blue shade of pink. Next weekend I hope to make some rich terra-cotta colored ones.

In the past, the most tedious part of the process of weaving these bookmarks has been the hemstitching. Each bookmark took just over an hour to weave (not including dyeing the yarn and dressing the loom), at least 20 minutes of which was the hemstitching. Until recently, I employed a magnifying glass to assist me with this job, since 40/2 linen is a fairly fine yarn and I will be 45 on my next birthday. Hence, my eyes need some help. Actually, I wrote about using a magnifying glass in an earlier post a couple years ago. Apparently I felt way more philosophical and content about it back then.

Recently, I became frustrated by how clumsy and slow I felt trying to hold a magnifying glass with one hand and to hemstitch one-handedly with the other. I thought to myself, “I wish there was some form of magnification that I could attach to my face.”

As soon as I had this thought, I realized that such technology had already been invented. In fact, I was in possession of said technology, or I would have been if I hadn’t promptly lost the pair of plus two reading glasses I had bought a few months earlier. They were very pretty with shiny pink frames, but they had cost about $20. I wasn’t eager to reinvest another chunk of change considering how quickly I had misplaced them. So, in the meanwhile I borrowed Matthew’s reading glasses, which was a modest improvement. They worked pretty well except they were a bit big for me and after a couple minutes they would loosen and fall off my nose. I could feel them loosening, and could stop to readjust, but I still had to stop what I was doing and it interrupted my flow. And there is something unsettling about the feeling of your vision sliding down your nose.

Around about the time that I was wishing for a cheap pair of my very own reading glasses, I happened to need some things at Rocky’s Ace Hardware. Lo and behold they were selling reading glasses for a dollar. One dollar. Normally I would object to something being sold for far less than the cost of materials and labor, but in that selfish moment I saw my opportunity and seized it. I bought five pairs of glasses in different styles, and now I no longer worry about losing them. And my hemstitching is now hands-free.

The old technology and the new, side by side. 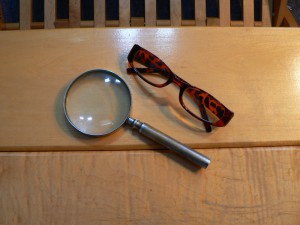 My new hands-free technology at work. 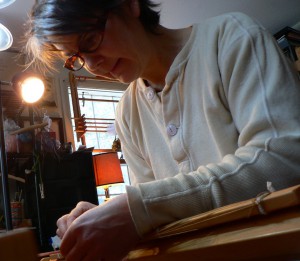 Me and my glasses. Of course, I can’t see anything at a distance while wearing these!