After my dyeing workshop at Massachusetts Agriculture in the Classroom I had two strong dyebaths left over. One was weld and the other orange cosmos.

The original weld bath was made with 6oz. dried plant material from second year plants in bloom. I had originally divided the bath in half because I wanted to add calcium carbonate to the bath in which I dyed the cellulose cloth swatches, but not to the bath in which I dyed the protein swatch books. I’m not sure that the calcium carbonate would do anything bad to the wool or silk, but I consulted my notes from a workshop with Joan Morris and according to my notes we hadn’t added it to the protein dyebath. I decided not to experiment this time around.

Since I planned to exhaust the weld with skeins of 40/2 linen premordanted with aluminum acetate, I combined the two separate pots of weld.  So, the combined baths contained a small quantity of calcium carbonate and I added some soda ash solution to brighten the color. The first two skeins weighed 4 oz. combined. They came out a fantastic, rich yellow.

Here’s the dyepot in process: 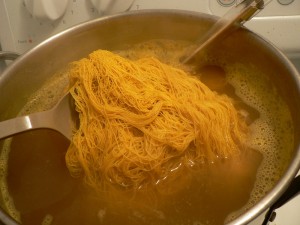 Then work got in the way and the dyebath had to sit for several days. It was in an unheated room and I figured it would be OK, but when I finally got back to it… pee-ew! But I am not one to be daunted by strong smells, and also am not one to waste potential color.

So, I did a second exhaust with two more skeins of 40/2 linen (also premordanted with alum acetate) and got a lighter but still very bright yellow. My normal procedure is to allow fiber to dry completely after dyeing, before I wash or rinse it. However, these were so stinky I washed them right away. Fortunately the bad odor washed out and the skeins smell fine. 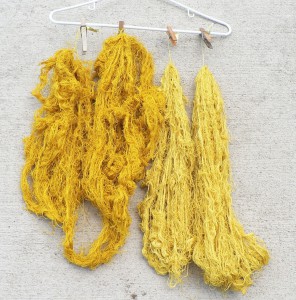