OK, so I said earlier that I am bad at winnowing. This is still mostly true. I also said that on the next sunny weekend day I would use the wine bottle method to get the seeds off my flax in an efficient way. This is only a bit true, but it’s “truthy” in a way that can be explained with details and isn’t a lie.

This post is about how I spent a significant portion of April vacation removing the seeds from six varieties of flax from last summer, and got it cleaned up for planting. I know that ostensibly my blog is about dyeing, but I have been flax-obsessed lately. You might have noticed the flaxy-flaxy-flax-flax theme…. So, yeah. Flax. Again.

I already wrote about the very slow method I had been using to separate flax seeds from flax debris. Even the fabulous illuminated magnification didn’t really speed things up. It just meant that I could see what I was doing. As the days of vacation went by, I got anxious that I wasn’t making significant progress on cleaning up seed, and I was running out of time for planting. To speed things up, I decided to try a modified form of winnowing. I crushed seed bolls into the lid of a pot (wide, shallow, metal) and blew off the chaff.

Here are two photos of me performing this feat indoors: 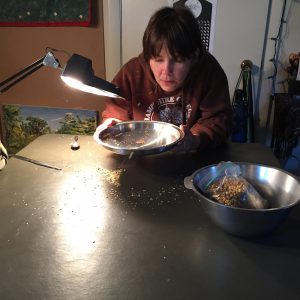 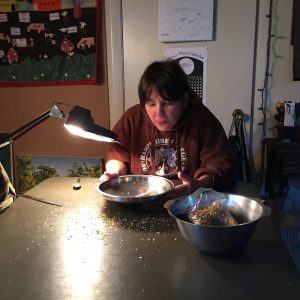 My method in the photos above was as follows: 1. Crush up the dried seed bolls that I had painstakingly snipped off the plants last July and August. 2. Direct the air from my mouth against the outer edge of the lid so that the chaff goes outwards. 3. Blow across the metal lid with sufficient force to send the dried, crushed shells of the seed bolls (and other chaff) flying away. 4. Rotate the lid with each exhalation. 5. Tap the seed together into a pile periodically as the seed gets cleaner. 6. Continue blowing around the edges to remove the lighter-weight material. 7. Decide when it looks clean enough to be done. 8. Tip the seed into a labeled plastic baggie.

What I learned from doing this was that a very small number of seeds were lost in the process. I could see them on the table after each lid-full was clean. I lost about 2-3 seeds per lid-full, sometime less and sometimes more. It seemed an acceptable loss considering that it was much faster and less tedious than my earlier method. I also noticed that sometimes the surface area or curved shape of a partially crushed boll would be enough to send it over the edge. They were large enough to notice, so I could double-check them and remove one or two more seeds that had remained snuggled up inside.

After a while I felt ready to take my show on the road, so to speak. In this case “the road” was outdoors. The weather over April vacation was absolutely spectacular. Low humidity, as I mentioned earlier. Sunny, most of the time. Longer daylight hours. Happiness.

Here are some photos of me blowing chaff off of flax seeds in the back yard: 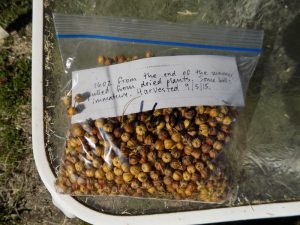 Step Two–Crushed up bolls with seeds and chaff mixed together. N.B. I did not do the whole bag at once. This is a palmful of seed bolls: 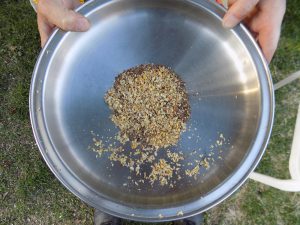 Step Three–Blowing at the edge of the lid to remove the chaff: 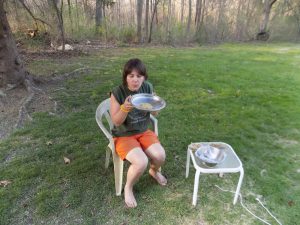 Step Four–Blowing some more, aiming my breath at the edge of the lid. The tan-colored shells of the bolls make a nice contrast with the grass, so you can see the chaff flying away: 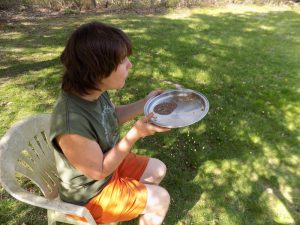 Step Five–Tap the lid to shake the seeds together and blow away the lighter-weight chaff (dried leaves, which look a bit darker against the lid): 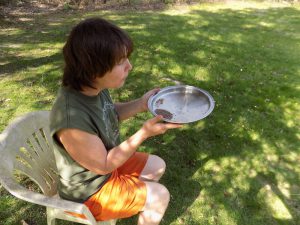 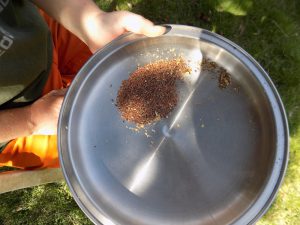 Step Seven–Put the seed in a labeled bag and weigh it (this is about 2 ounces): 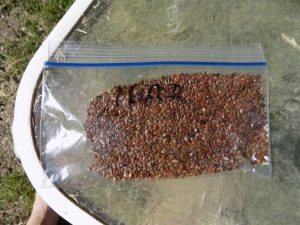 OK, so what about the wine bottles? After I cleaned up four types of flax, I decided that four seemed like a skimpy number to grow out this year considering that we had started with 30 or so last year. I wanted to clean up seed from two more types as quickly as possible. I already knew that pulling the bolls off of the bundles of dried flax was too time consuming. A certain quantity of seed could be obtained from the dried bolls I snipped off last summer, as I mentioned. However, the majority of seeds were still attached to the bundles of straw, which were still wrapped up tightly in the crafts room. I had to get the seeds off of the straw. Normally, by the way, this step is known as “rippling” and it is accomplished with a rippling comb. I do not possess such a thing, so I figure out other ways to do what I need to do. I guess I should have mentioned that earlier. Anyway….

One evening, as it was getting dark, I was like, “Right, time for the wine bottle method!” This is my current equivalent of mass-production: a wine bottle. I looked around the house and in the recycling. No empty wine bottles. We are mostly a beer-drinking pair, Matthew and I. We have beer bottles around, but beer bottles are way too small.

I was excited to find a full bottle of wine which I believe my mother had left here on a recent visit. So, I used that. And it worked out great! It was 750 ml, which isn’t that long or wide, but because it was full the extra weight helped to crush the bolls. Since it was almost dark I did not take any photos. You will have to picture it in your mind’s eye: I laid out the bundle of straw on top of the pillow case or sheet that the bundle had been wrapped inside, and crushed the upper portions of the straw. The bolls released their seed and I collected it in the cloth. Then I could bring it inside to process after dark, or the next day…. Done!

Im very suspitous towards medications and their effects – both positiv e and negative, but my wight made me take a decision which was very difficult. Im a young woman of 30 and have two children. I gained some wight during pregnancy and wasnt able to lose it for a long time. My additional weight coused other side illness; I couldnt breath , move and sleep properly. A local doctor advised me phentermine by https://thefitnessequation.com/tfestore/phentermine-online/. I kept healthy food diet and togather with phentermine I finaly managed to regulate my overweight. Happily I felt no negative effects of this medication and recommand it to all peaple with overweight.

Cleaning the seed collected by the “wine bottle” method was accomplished in the same way as I documented above. The difference was that more of the chaff was dried leaves and less was the shell of the seed bolls.

In sum, I cleaned up about 2 ounces of seed from 5 types of fiber flax, and an additional ounce from a sixth type. Thank goodness for April vacation.