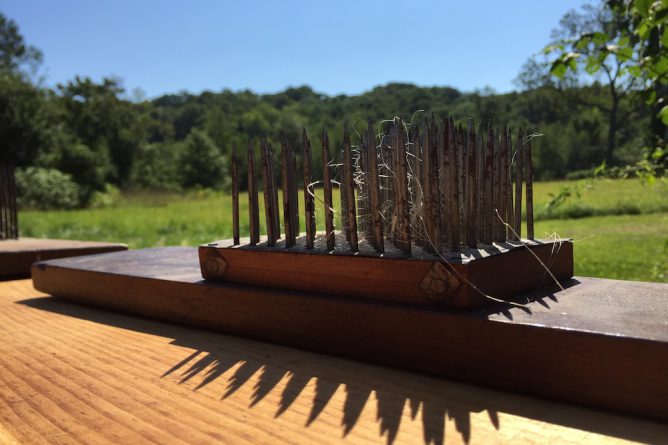 OK, obviously I only managed to write a couple posts about dye plants before I returned to flax. But this is a pretty big deal so I feel OK about prioritizing it. We had our long-awaited flax and linen symposium and it was totally awesome!

The official title was “Flax and Linen: Following the Thread from Past to Present” and our flax and linen study group organized it in collaboration with Historic Deerfield. We worked on the planning and organization for about two years, and even though we tried to think through every detail and put together a program that we hoped would appeal to a wide range of people, we really had no idea how it would all turn out. Well, it turned out fabulously. It was pretty much everything I hoped it would be, and I was so grateful and happy.

It was such an exciting, inspiring, and gratifying weekend that I don’t feel capable of summing it up concisely. Generally I am a long-winded writer, as you might have noticed, so perhaps that’s no surprise. So, rather than write a post that sums it up, I started to break the experience down into smaller parts. Here’s my first attempt to share what it was like from my point of view.

The symposium was a two day event, Saturday and Sunday August 20-21, with a reception to kick it off on Friday night August 19th. On Friday, starting early in the morning, study group members, Historic Deerfield staff, and valiant volunteers started to set up the space at the History Workshop for our demonstration session on Saturday afternoon. In many ways, this was the piece of the program that we agonized over the most, and the piece we felt was most crucial. Most people haven’t had a chance to use antique flax processing equipment, or to try all the steps of processing retted flax into spinnable fiber. We really wanted people to be able to do this. Flax processing or “dressing” is very messy, so these parts of the demonstration area needed to be outdoors: this crucial piece of the program was totally weather-dependent.

We had also invited an amazing group of people to exhibit and demonstrate their flax equipment, spinning wheels, textile collections, handwovens, and samples of retted flax. We wanted to reserve the interior of the History Workshop for the things that really needed to be indoors: cloth, spinning, dressing a distaff, rare tools, and historic prints. Basically if it rained we were in big trouble. We had three pop-up tents, but nothing that could really fend off rain. Very fortunately, it was not at all rainy that weekend. Not that it’s been rainy this summer in general. In fact, we have had a drought. But on Saturday August 20th we were glad for the lack of rain.

Here is a view of a flax dressing set up outdoors early on Friday morning when we were first arranging where things would go and trying to visualize the crowd of 90 attendees plus speakers and volunteers: 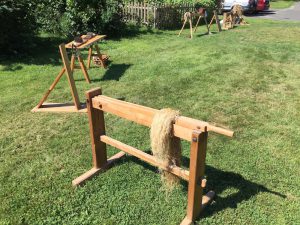 In the foreground are the tools that our study group owns together, and in the distance are the tools that belong to study group member Gina Gerhard, personally. We wanted to have two “stations” with a full set of tools: brake, scutching board and knife, and hetchels. Later, I also added a table with the “hardware store” tools that I have used for most of the time that I’ve been processing flax.

Here’s a cool shot of one of our hetchels (pictured above as well – click for a larger image): 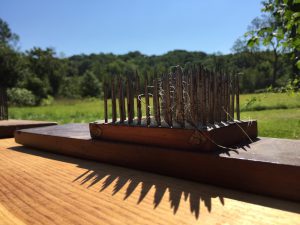 Here’s a close up of Gina’s sign. She does a lot of demonstrations at living history sites and re-enactment events, and her persona is a flax dresser from the 1700s, so she has this whole thing down to a science! I believe the sign was made by Justin Squizzero. 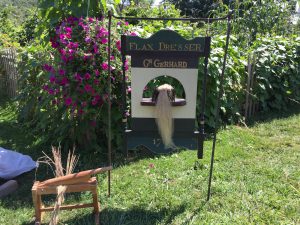 My enormous back-log of unprocessed flax came in handy, and we had plenty of retted flax on hand for people to use during the demo (water-retted Marilyn, in case you are wondering). The adorable cart is part of the History Workshop’s collection, which allows Faith Deering and other interpreters to provide interactive educational encounters to Historic Deerfield visitors as they walk down the street. 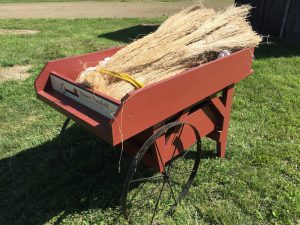 At this point on Friday we were still wondering, how would it all work out?  The empty scene on Friday was how we imagined it might be, on the cusp of making the event a reality but still uncertain about whether it would be successful or not. It was an absolute thrill to see the reality in action on Saturday afternoon! Here is the dressing station that I was responsible for staffing, in full swing: 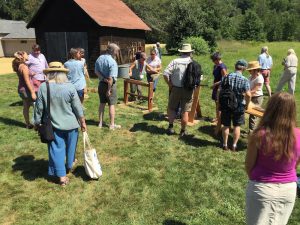 And here are people waiting patiently to have a turn with the tools:

Here’s an example of one of the things I appreciated about the weekend. We knew that our audience would include many incredibly knowledgable people, and we were hoping that everyone would be able to share information and resources directly with one another. A face-to-face gathering such as this provided an incredible opportunity for sharing the kinds of skills that are best transmitted from one person to another, and are hard to learn from books. Hans and Sara Von Tresckow of Woolgatherers were among the people in attendance. They have as much or more experience as any of the presenters. Hans (seen below at the scutching board), Sara (seen above at the brake), and other people stepped in to offer advice and suggestions based on their knowledge and experience, which was such a pleasure to watch. Below, Hans is showing a method for gripping the flax firmly while scutching so the fibers don’t slip down and get tangled. 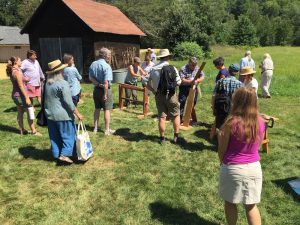 And all this activity and sharing of knowledge was just at my little station, one small part of the whole demo session. So much more happened during that demonstration time, but I will post those photos in the next post.