OK, I haven’t sewn a new book in a couple weeks because I have been taking advantage of the extended fall weather and have been dyeing (outdoors) with some particularly stinky and stainy dyes: weld, black walnut, and an ancient umbilicate lichen vat from 2006. Each one deserves a post of its own, so I’ll start with the black walnut.

The black walnut has been an unintended exhausting marathon. That’s a pun. “Exhausting” is what you call it when you re-use the same dyebath (or dye liquor, or ooze, depending who’s talking about it) multiple times until there is no color left. One of my on-going projects is to weave a series of rya rugs using a limited palette of yarns that I have dyed with a given quantity of plant material.

To dye the yarn for the first rug, earlier this summer I dug 5.5 lbs. of Lady’s Bedstraw roots. This quantity ended up dyeing 2lbs. 12 oz. of wool in various shades of pink, peach, apricot, salmon, and, yes, warm beige. Beige in any of its various shades is not my (or, I think, any dyer’s) favorite color. Certainly it comes in handy when you need some neutral to balance out a design. But considering all the work involved in dyeing with plants, especially when you start with the raw materials themselves, it’s not really worth it just to make beige, even warm beige. There are plenty of beige sheep. Creating beige does not inspire awe, or joy, in the dyer. It also does not impress non-dyers with the power and magic of natural dyes. Since part of my concept with this project is to demonstrate the incredible range of color that a single plant–even a single dyebath–can generate, too much beige defeats the purpose.

This year, as you may recall, was a bumper year for black walnuts around here.  I decided to commemorate the bumper black walnut year with a rya rug, even though I often joke that dyeing white wool brown is a questionable pursuit (there is probably a fairytale about the foolish girl who spent her time and energy on this…). There are plenty of brown sheep. Nevertheless, I really love noticing and celebrating the natural world around me, whether events are daily and mundane or unusual and remarkable. Being aware of and participating in the cycles of plants, especially, is one of my great joys in life, and one of the reasons I am passionate about natural dyeing. Plus, you can get an incredible range of colors from black walnut. Thus began the mega-black walnut project.

After the bedstraw experience, I decided I didn’t want as many beige skeins relative to the total quantity of yarn. So, I started with an admittedly huge amount of walnut hulls hoping for a lot of nice dark browns and not so many beiges.  OK, you can already tell at this point in the story that I was dreaming, but my vision was blocking my vision, so to speak, and I can only see that in hindsight. I started with nine and a half pounds of walnut hulls that had been soaking in buckets outside for several weeks. I usually think that boiling walnut hulls smell delicious, but these had an unpleasant “swamp” smell due to the fact that they had been decomposing in the relatively warm weather. So, this had to be an outdoors project, using the portable electric burner.

I don’t have large pots, so this whole operation is being run with small pots and small quantities. In fact, I’m thinking “Small Potatoes” may become the name of the series (assuming I ever actually weave these things). I divided the hulls between two pots 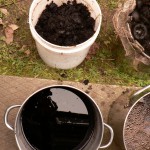 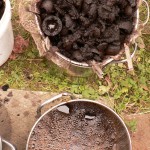 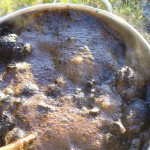 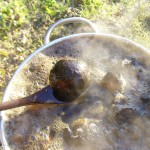 When extracting the hulls you can let them boil and it won’t hurt the color, but it will make a huge mess if it boils over, so I kept a close watch. Above on the left, “a watched pot never boils.” On the right, a portion of a hull in the dyepot. Below on the left you can see the white skins being mordanted with aluminum sulfate, and on the right, the rich color of the dye bath once the hulls were strained out. 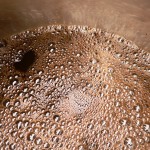 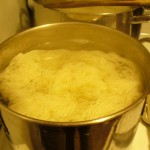 Those four original dyebaths have thus far dyed 4 pounds of wool, in successive batches of 4 ounces each, and I have yet to reach beige (I’ve gotten to tan). I have been mulling for many days now whether or not to continue. I already have plenty of wool for a rug, at least a rug of the size I initially envisioned. But I have not truly exhausted the baths. I think I could dye another pound of wool before I actually exhaust the color.

I took a hiatus from the walnut project when we had a cold snap, and my pots and buckets froze (too stinky to keep indoors). Here are hulls with frost on them (which I could even extract again, if I was crazy) and a frozen dyebath: 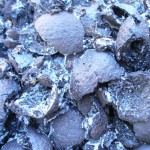 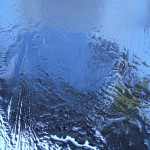 But I think I have to continue to the point of true exhaustion. A bumper walnut year calls for an epic quantity of brown yarn, and perhaps an astonishingly big rug.