This is a long story. I will tell it in parts.

Part One: The Snow Storm

At the end of October, 2011, we had a big snowstorm. The snow was wet and heavy, and snapped and broke tons of trees and branches. There were sad broken trees all over the place, and it took a very long time for all the wood to get cut and stacked or moved away. In the woods, depending on how much people-traffic there is, a lot of trees and branches are resting where they fell to this day. And many of these trees and branches were, and are, covered in lichens. It was an unusually early storm with an unusually destructive impact–the first installment of the weird winter, weather-wise.

Around this same time, I was planning a series of cellulose dye projects. One of the dyestuffs I wanted to use was an umbilicate lichen fermentation vat that had been sitting in the closet for an indeterminate length of time. Well, it was determinate. Since July 2006. I know, ridiculous. I blame my Master Weaver certificate. After so long, I figured it was time for a refresher on lichen dyeing, so I re-read Karen Diadick Casselman’s Lichen Dyes.

It is an inspiring book on several levels. I especially appreciate her guidelines on the ethics of gathering and using lichens, and her promotion of “salvage botany.” After rereading her book, I was embarrassed to realize how far I had fallen short of the Code of Ethics she outlines, and was motivated to try harder. She suggests learning to identify five species of lichen, including the Latin names, before you collect or use any. I haven’t done this.  I’m lucky to own an incredible resource, Lichens of North America by Brodo, Sharnoff and Sharnoff (a score at Raven Used Books in Northampton many years ago), so I don’t really have an excuse. Among her other recommendations, which I do follow:

“Focus your attention only on found (unattached) lichens.”

“Use for dyeing only those lichens that are conspicuously abundant.”

I take to heart, in particular, this admonition and astonishing, awe-inspiring fact:

“Learn to appreciate that large umbilicate lichens may be hundreds of years old. Respect these organisms as you would any other botanical specimen of mature years.”

My first lichen experiments were in 2004. I used two different types that had fallen from the trees onto a lawn on Cape Cod. With the boiling water method and no mordant on wool (Finn), one type produced a warm creamy yellow, and the other golden brown. I never did positively identify them. The one which made yellow was possibly some type of Usnea (my best guess was Usnea strigosa), the other possibly a Flavoparmelia (F. caperata?) or Rimelia (R. reticulata?).

Here are the same samples on two different color backgrounds. The sample in the center was first dyed in the yellow bath, then the golden brown one: 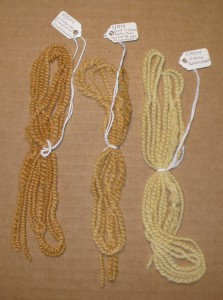 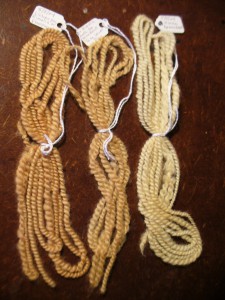 Both lichens yielded colors that were much better than beige, but I felt like I could get these colors in other ways, so I didn’t try them again.

Some lichens make amazing colors in the magenta, red, and pink range, with an ammonia fermentation vat. It is very hard to get these colors with natural dyes, unless you use cochineal. Cochineal is not local to New England. Plus, it’s pregnant female bugs and that just makes me feel bad. So, using these special lichens seems worthwhile to me.

These awesome lichens are called umbilicates. An umbilicate lichen attaches to its substrate (what it grows on) by an umbilicus, which is like a little foot or holdfast, or an umbilical cord. I’m sorry to say that I am still not positive if I have been using Umbilicaria americana or U. mammulata, or perhaps both (apparently they often grow together).

These umbilicates are not too hard to find, if you do a lot of hiking around in the woods. They grow on steep rock faces, and where they are happy you can sometimes find tons covering the whole surface. It’s a simultaneously earthly and alien sight. 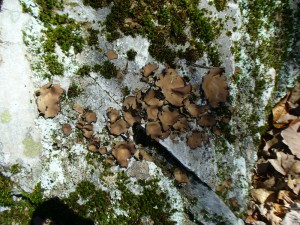 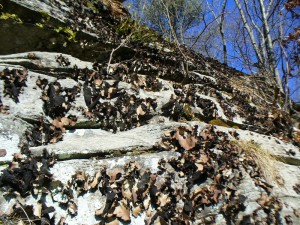 If you tear around the edge and leave the umbilicus attached, the lichen can keep growing. My practice had been to gather infrequently and sparingly from several different spots. This was how I gathered the jar-full that had been sitting in the closet in an ammonia solution fermenting for oh so long. I have used them a few times very successfully on wool.

Here are the samples of my umbilicate dyebaths on wool, using the ammonia fermentation method that Casselman outlines in her book. 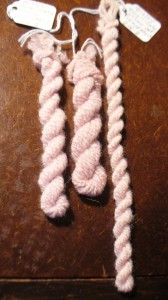 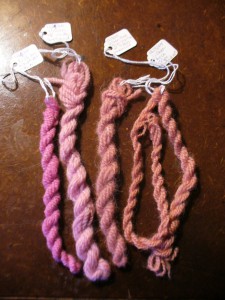 The top pictures demonstrates that too much fiber will give pale colors, so don’t be greedy with umbilicate vats. This process requires a bit of discipline and restraint.  In the bottom picture, the difference in color between the samples on the right and the ones on the left is due to pH. The ones of the left were immersed in a high pH bath (not as high as the vat itself, but still very alkaline). For the ones on the right, I added vinegar as well as water to the vat solution, and got the pH down to 7. In general, higher pH (alkaline) will give more blue colors, and lower pH (acidic) will give more reds.

There’s more to come in the lichen saga, so stay tuned.

One thought on “A Tale of Lichen and Weird Winter Weather (Parts One, Two and Three)”