I finished a new rya. Here it is:

This one is dyed with umbilicate lichen from Amherst, Phillipston, and other locales in Western MA  and a feathery bark-growing lichen from Cape Cod that I couldn’t properly identify. I originally set up the umbilicate lichen vats in February 2012, and tended them carefully for many months. See my original post about setting up the vats here, and a photo of the warm yellow yarn I got from the bark-growing lichen here. In theory the vats were ready to use last summer but I didn’t get around to using them until this summer. I was worried they were too old, but no, they were strong and gorgeous. I chipped away at dyeing with them over the past several months, so by the time I was planning this rya I had a wide range of awesome colors. Too many to fit into one rya, actually.

There are a lot of stories to tell and photos to show about the dyeing process but I will save those stories for a second post. Apparently lichen makes me even more long-winded than usual (see my earlier series of posts about lichen and the unusually mild winter of 2011-2012). That’s what communing with 300 year old symbiotic organisms will get you.

After I finished the woad-blue rya I wasn’t sure what to make next, so I spread out all the yarns I’d dyed with this series of ryas in mind, and considered the options. 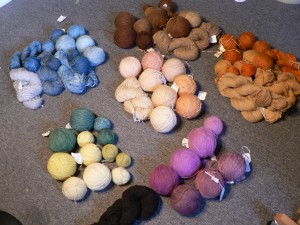 Clockwise from the top these are wool yarns dyed with black walnut, orange cosmos, umbilicate lichen, Queen Anne’s Lace, and woad, and in the middle are Lady’s Bedstraw. The purples and pinks were the first to speak to me.

I made a plan and got started. There was some back and forth between the paper plan and the colors…. 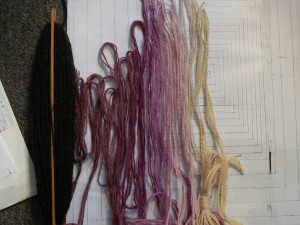 I spent an afternoon trying different combinations of colors in “butterflies” (a way of bundling the yarns so it’s easy to manage while you tie the knots) until I got a progression that I liked. And, here’s the first attempt: 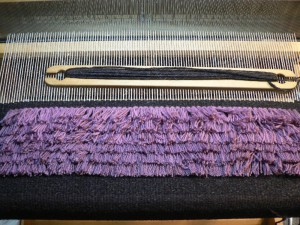 The naturally dark brown Shetland wool I was using for the plain weave is nice and thick, so I was proceeding merrily along at a good speed. But after several rows, I wasn’t very happy with the way the colors looked together. 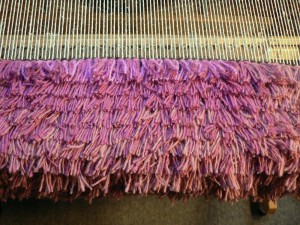 I think the problem was that within each knot there was too much difference in value (one color was very grey compared to the other) and also too much difference in saturation or intensity. Instead of blending nicely, the effect was jittery and the colors brought out the worst in one another. I didn’t like it and I unwove the whole thing.

I gave up on trying to have a smooth transition between each group of colors, and went for a sudden “jump” between the three main groups of colors. Here is the first jump, between the purple-grey field and the magenta-pink field. Even though the magentas and pinks differed in value, also, I felt that they worked together happily. 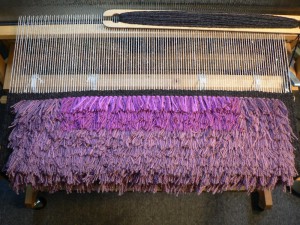 Working in the center was very satisfying. I decided to include some very pale pink alpaca and hand-spun wool along with the commercial wool yarns. There was a very pleasing luminosity and sheen to the fibers, especially the alpaca. 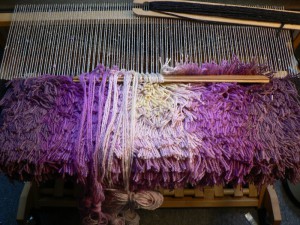 One lesson learned from this rya is that the Shetland yarn was a bit too stretchy to work well as a plain weave background yarn. While I was weaving it was easy to work with, but off the loom there is some waviness to the rya that I think is due to the elasticity of the yarn. So, not the most technically perfect of my ryas.  Colorwise, though, I am well-satisfied.