This summer I started out with two small beds of woad on opposite sides of the garden. Normally I don’t grow woad in the same bed two years in a row because it doesn’t do well the second year. I know you ought to rotate beds to interrupt pest and disease life-cycles, and I thought we were doing pretty well with this considering that our garden isn’t that big. My woad has been plagued by slugs and cabbage whites, but I’ve never had serious disease before. I’ve always chalked-up the deficiencies of a second-year woad bed to a nutrient problem, though I’ve never actually tested “before” and “after” soil samples to find out exactly what gets depleted. So, my original two woad beds this year were not planted in the same beds as last year.

Nonetheless, the other day I noticed that some of the woad plants in one of the beds looked weirdly droopy. Not just wilted from lack of water, but sort of shriveled. This photo gives a sense of their appearance. 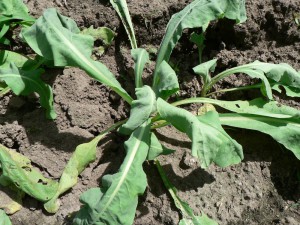 The leaves in the center are especially curled and droopy. I pulled up a few of the worst-looking plants, and lo and behold: 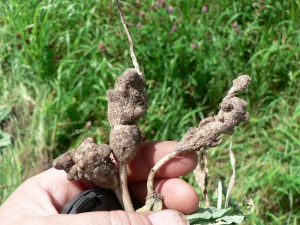 Normally woad has a long, straight tap root kind of like a parsnip or curly dock. I believe this deformation of the roots is caused by club root. Club root is a soil-borne pathogen that affects brassicas. Woad is a brassica. Read here at the UMass Extension website to find out more about it. Apparently there is not much to be done about it, except to lime the soil to bring the pH up (that is, make the soil more alkaline). The other precautions are to keep weedy brassicas out of the affected area, and to leave several years between rotations of brassica crops. Thus far the other beds look OK, although you can spread the fungus via contaminated soil on tools or your shoes. Bummer.

Thanks to the veritable woad-a-palooza that ensued in the bed where I let the woad go to seed from last year, I added two more beds after the initial two that I planted. Tons of seeds fell from the stalks before I cut the plants to dry. I’ve never had this problem before; I have always had to pull the seeds off the dry stalks by hand. Here are the fallen seeds on the ground, and after that, the zillions of seedlings that germinated despite total neglect. 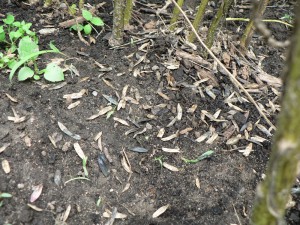 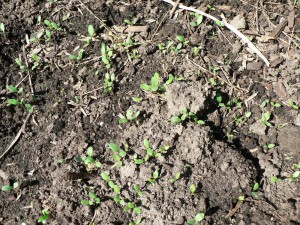 I have never had much success transplanting woad. Thanks to the woad-a-palooza event, I have hundreds if not thousands of densely crammed seedlings to play around with. Here you can see the pathetic results of some larger plants I separated and transplanted. This is typical of my attempts to transplant woad in the past: 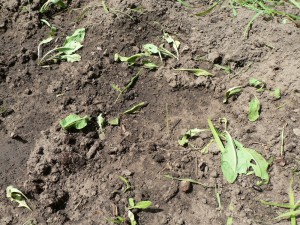 A more successful approach was to dig up and move shovel-fuls of tiny seedlings in a big clump, let them get established, and then thin them later. They still got stressed when I pulled out their little buddies with intertwined roots, but they haven’t died yet. 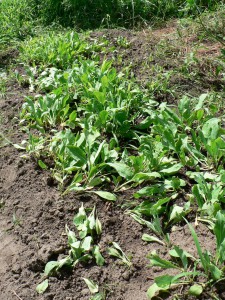 I feel lucky to have some back-up woad to off-set the losses to club root.