Last Friday (February 24th) I set up three new umbilicate lichen vats with the fallen lichens I collected on February 1st and 6th. I had stored them in two different bags. The material in one bag was damp, and the other dry and crispy. You’re supposed to dry them first, but I proceeded with the damp ones and hope it works out.

Several of the pieces were enormous. If they grow half a millimeter a year, this six inch piece must have taken over 300 years to reach this size! 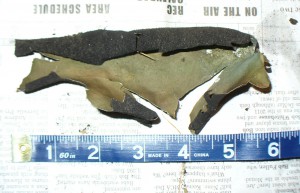 This piece, too, must be ancient. 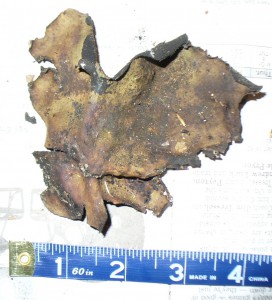 As you can imagine, handling these things inspires awe.

I crumbled up the dry ones, tore the damp ones into small pieces, and combined them. I had 12 cups all together, though “cups” is sort of relative because you can compact them, and then they spring back up again. The total weight was 12 ounces. I divided the lichen pieces between three jars, with 4 ounces in each. 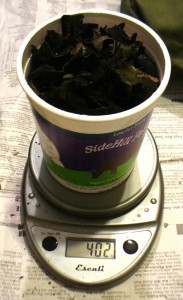 With the exception of using the damp lichen, I followed the directions in Casselman’s Lichen Dyes. I also found and re-read her article “Color Magic from Lichen Dyebaths” in Shuttle, Spindle, and Dyepot from Spring 1986 (vol. 17 #2), which I forgot to mention in my posts before.

She says to choose a jar that can accommodate twice the volume of the lichens. You need a lot of headroom in the jars to allow the lichens to expand when they get wet, and to make sure there is enough oxygen in the vat. I put the crumbled up lichen in the jars, and added equal amounts of ammonia and water (2 cups of each). The ammonia solution was pH 10. 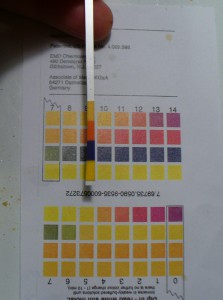 Here are the jars. 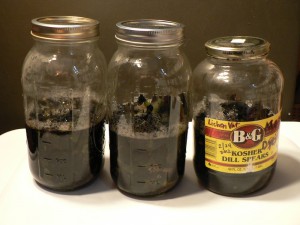 You can see that the bubbles on the surface are clear (well, a very light color).

After a week of stirring up the soaking lichens each day to incorporate oxygen, the color is developing nicely. Here’s the spoon I’ve been using, plus some of the liquid which has dribbled off. 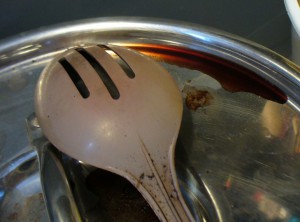 Here are the jars after a vigorous shake this morning. Note the darker, more reddish-colored bubbles. I have to admit that I have not been stirring as many times a day as Casselman recommends, but things seem to be moving along OK. 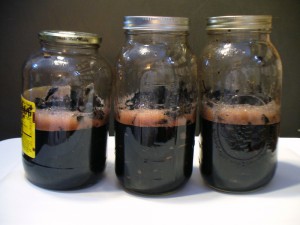 It takes at least 16 weeks for an ammonia vat to develop and “ferment” properly. I will continue to incorporate oxygen regularly, which Casselman says is necessary to allow the orcinol to convert to orcein. So, don’t hold your breath as I probably won’t post about these vats again until June.

One thought on “New Umbilicate Vats”