Rippling is the process of removing seed pods from dried flax straw before retting. Traditionally, the dried bundles of flax were pulled through a comb-like tool called a ripple to remove the pods. You can see pictures of ripples here. Flax seeds are a very useful commodity, and can be pressed for oil, fed to animals or people, or saved to plant the following year.

In the course of using some improvised “ripples” my experience has been that the seed pods tenaciously cling to the stems, and the stalks slide up and pull out of the bundles. Even with gloves it is hard to keep a firm grip and the bundles get messed up. So, I developed an alternative method which involves sitting on a sheet or a tarp and crushing the seed pods with rubber-palmed gloves. The bundles don’t get tangled, but it takes a really long time. I obviously don’t shy away from things that take a long time, but I would go so far as to say that rippling is tedious.

Back at the beginning of August as I rippled the seeds from a pile of flax that I was getting ready to ret, I began to wonder if it was really necessary. I was not planning to save the seed this year, since I grew different varieties of flax close together. The question in my mind was whether leaving the seed pods on the stems would adversely affect the retting process in some way. I consulted some flax friends, and discovered that removing the seed pods is not an essential step and lots of people skip it for one reason or another (the seed is immature, or there isn’t a lot of seed, for example).

So, I decided to skip the rippling for the subsequent retting tank in mid-August. When I went to dump out the stinky retting tank water, there were tons and tons of seeds. I figured they wouldn’t be fertile after all that fermenting, and even if they were, I didn’t think they would be able to push their way out of the seed pod cases. Consequently, I didn’t worry about where they landed. I dumped a lot on the lawn behind our apartment. Tons more seeds fell off the retted bundles when I hung them up to dry outside the back door. I assumed they would just decompose or maybe little creatures would come and eat them.

This same week we had moved the compost bins to the other side of the yard because the property manager was having new fences installed between the apartments. So, these seed pods had fallen on the nice dark earth where the compost bin had sat for years. Yum, said the fermented seeds.

Several days later Matthew noticed that hundreds of seed pods had sprouted. Below you can see just how many were blanketing the ground. 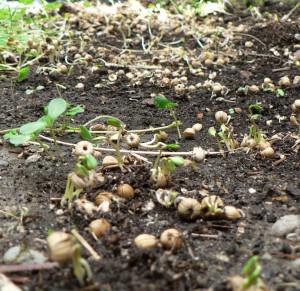 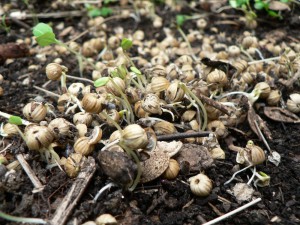 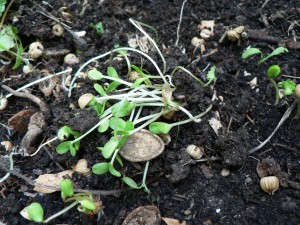 Above you can see some pumpkin seeds, left from the compost. Below is a close up of one pod. It had an excellent germination rate, actually, though I’m not sure how tall the plants would have been able to grow if they had been left alone. The white ends are the root ends. 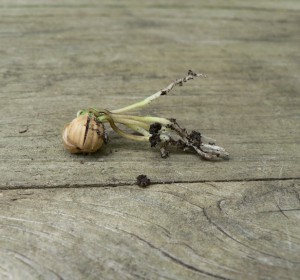 Below is a similar pod still in the ground. 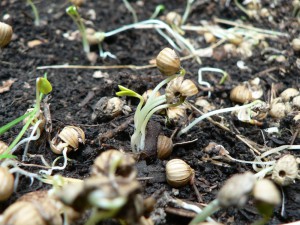 In the background below you can see the old fence. 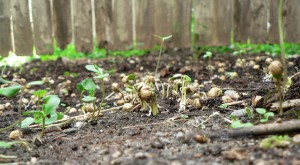 This one looks sentient. I found this whole phenomenon fascinating and beautiful. Hence, all the photos. 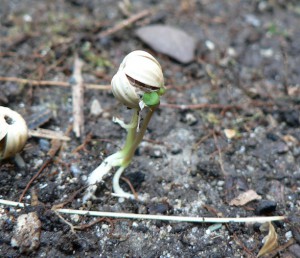 Unfortunately the fence replacement project did away with my accidental flax growing experiment. I would have been curious to see whether the seedlings could have escaped the pods, and whether the distance between the plants was enough for them to grow.