Here’s the short form: During the Twelve Days of Christmas, women ceased their spinning labors (and probably increased their cooking labors, to everybody’s satisfaction). When the Christmas celebrations were over, the day that spinning commenced once again was acknowledged with traditional “pranks”. Apparently, one of the principal forms of entertainment was that the ploughboys (who did not have to go back to work until Plough Day or Plough Monday, which was either the next day or a fortnight later, depending on what you read) would light the spinners’ flax on fire. 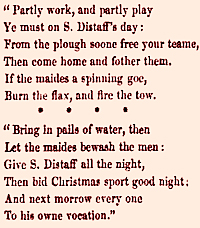 When I first read this I was offended and angry. I am not a fan of pranks or practical jokes in general, so it’s no surprise that I wouldn’t get a kick out of this one. I am especially not a fan of the “battle of the sexes,” and jokes that depend on the supposed dichotomy of the “sexes” for their punchline. Suffice it to say that I believe that gender is a social construct and women-are-from-Venus-men-are-from-Mars stuff distracts us from being human.

Even more importantly, knowing the amount of work that goes into sowing, tending, weeding, pulling, drying, rippling, retting, breaking, scutching, and hetcheling flax, not to mention the spinning, I could not understand how this kind of wanton destruction was tolerated by societies that depended on the fruits of this labor for their cloth, let alone how it could be celebrated.

Here I should add that the other “fun” part of the day was that spinners/women would put out the fires with buckets of water, and in the process, douse the ploughboys/men with water, too. Ha ha! If someone set my flax on fire on purpose, the least I would want to do is dump a bucket of water on them in January, preferably outside. I should also mention that flax, unlike wool, is extremely flammable (in the sense that it catches fire very easily).

Nonetheless, these festivities were apparently traditional, and the question remained, why? So, I pondered this for a few days. Some ideas came to mind.

First, mid-winter in the northern latitudes is a very dark and depressing time. People tend to go a little bonkers. We are not at our best (speaking for myself, anyway). Things that we may reject as bad judgement during a sunnier time of year may seem like a good idea at the time. Even more so, lack of sun may make you feel so inexplicably furious and rageful that doing significant damage might feel very satisfying. To whit, burning what ought to become your new shirt (by the presumably male participants), and allowing this to happen (by the presumably female participants).

Second, having just gone back to work myself after a nice relaxing winter vacation, I want to acknowledge that it is very hard to go back to work after a long holiday, even if you love your job. If you really hate spinning, gender be damned, or you had to do a lot of cooking and cleaning (which you may also hate) during the holiday, it may be double-hard.

Third, I wonder if burning flax was one way that communities asserted or celebrated their wealth. I have been fascinated and stumped by sacrifices and the burial, burning, submersion, breaking, etc., of valuable things in a lot of different contexts. It is simultaneously obvious and problematic that conspicuous consumption in the form of voluntarily burning valuable resources makes a powerful and meaningful statement.

A personal anecdote about this paradox was when I attended WaterFire in Providence a few years ago. It was captivating and evocative, a magical and memorable event. But at a certain point in the evening I felt bad about the unnecessary burning of all that wood. The organizers claimed that it was sustainably attained, but still… it was just burning. I really enjoyed the spectacle, the sound and heat and dance of fire reflected in the water, but it also made me feel guilty. Trying to reconcile the good and the bad, I realized that public festivals (even modern-day inventions) are perhaps not too different from festivals in the past (even though the past is often so hard to understand). A harbor city in a temperate climate with plenty of rainfall and trees may well feel lucky to have such abundant resources. They may want to celebrate their wealth. They may well want to flaunt their wealth to other communities that might not think so highly of them. “Yeah, we’ve got wood to burn!  Yeah, we’ve got so much water we just sail up and down it for fun.” Following this logic, perhaps burning up some of your flax just shows everyone that you have enough flax to spare, not to mention enough laborers, land, water, and tools to grow and process it all. Hey, ya’ll, we’re rich! We’ve got flax to burn.

Fourth, “Plough Day” is not without its own flames and fires. This will be the subject of my next post.