I have been having a hard time wrapping up this thread because the more I read, the more complicated this whole subject becomes. I was initially annoyed by the idea of wanton flax-destruction on St. Distaff’s Day or Rock Day (a rock is a distaff). Then I was intrigued by the relationship between St. Distaff’s Day/Rock Day and Plough Monday, which is the following day. Known by these names, these two traditions appear to be mostly English. However, there are plenty of similarities to other holidays in other parts of Europe that are celebrated around the same time. Then I became intrigued by the holidays that are celebrated the night before St. Distaff’s Day. To sum up, there were theatrical antics on Twelfth Night/Perchtenlaufen, then antics on Rock Day, then more theatrical antics on Plough Day. The dates of these holidays are January 5th, 6th, and 7th, respectively. If everyone had to celebrate each of these holidays, we’d all have to spend several sleepless nights and exhausting days parading around in the snow in fantastic costumes, running or getting chased, making a lot of noise, getting wet and/or being set of fire. Phew. I can hardly get out of bed this time of year. The timing struck me as more than co-incidental. These holidays seem to be related, but how? 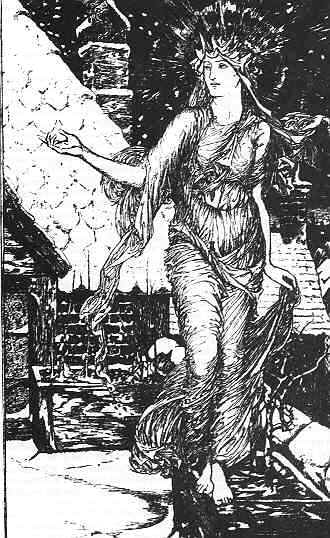 In a recent post I mentioned being intrigued by the association between Berchtentag and Epiphany in the Wikipedia article about Perchta. Berchtentag is January 5th or 6th, the same day as Epiphany.  Epiphany is also known as Three Kings Day, the day in many Christian calendars when the three kings (a.k.a. three wise men from the east, or Magi) arrived to give gold, frankincense, and myrrh to the baby Jesus. This is the same day as the Twelfth Day of Christmas, or Twelfth Night. Read a little bit here about Twelfth Night, including why twelfth day and twelfth night are not always on the same date.

Where it was celebrated, Twelfth Night featured revelry and merrymaking, drinking and eating, and the overturning of certain social roles. The timing of these two holidays made me wonder whether Rock Day/St. Distaff’s Day was an extension of Twelfth Night activities.

From the article on Twelfth Night in Wikipedia, I followed the link for Perchtenlaufen. Perchtenlaufen was, and still is, celebrated in parts of Austria. Yes, it is also on January 5th or 6th. Percht or Perchta has two aspects, the beautiful and the terrifying (more on this below). Perchten is the plural, and on Perchtenlaufen people dress up as both and go running around through the streets. Look up images for it and WOW! Here’s a blog post about Perchta from Angeliska that I found informative and well-written. Even though these holidays are celebrated in different places, I wondered whether the types of things that happened on St. Distaff’s Day (i.e., spinning is supposed to commence once again, but ploughboys burn distaffs, and then spinners drench both flax and ploughboys) were an extension of the traditions of Perchta’s day (or night).

Perchta and Holle are known by various names. The spelling of their names depends on which region of Germany, Switzerland, or Austria the tradition comes from and where it has been maintained or revived. The two figures seem to have a lot in common. It’s possible that they were once more distinct, but over time they have morphed to become more similar and/or conflated. On the other hand, some people believe that they both represent one or more earlier goddesses whose influence was more generally widespread. The history of these various figures and their holidays is very complicated. How ancient are these traditions? Neolithic? Medieval? There are relationships between them but also differences between them, not to mention changes over time and differences from place to place.

Please forgive any over-generalizations and errors of fact or interpretation. Let’s stick with Perchta for a moment.

She is depicted as having two distinct aspects. One aspect is beautiful, luminous, beneficent, protective, and nurtures fertility and supports human labors so that a community can thrive. The other aspect is scary-looking, ferocious, and punitive. Both the beautiful and scary aspects can be embodied in, or represented by, multiple beings. On Perchtenlaufen, both aspects go abroad. What exactly they are up to and why is a subject of some debate: Are they the forces of life scaring off and defeating the forces of death? Do they represent spring conquering winter? Are they blessing homes and fields and promising a good harvest for the coming year? Are they demanding money and food out of necessity, or just to cause a ruckus? Are they the restless dead wandering the earth in search of a comfy bed? Do they come to protect you, scare away your enemies, and threaten whoever needs threatening?

Here is my current interpretation: Perchta wants the world to be fertile and fruitful. She wants your household and your farm to be productive and well-managed. She will help you get things organized and will fight off chaos and entropy. She will vanquish your enemies. However, if your enemy is your own sloth and indolence, you’d better watch out! To me, both aspects are concerned with the same priorities, but one encourages people in their efforts while the other punishes people for their failures.

Perchta has a lot of responsibilities. One of them is to make sure your flax grows straight and tall, and to make sure you process it and spin it beautifully. Hilda Ellis Davidson, citing Grimm, describes “a woman in white who comes at noontide to women weeding the flax, and instructs them how to grow and spin it.” If you don’t talk to her, she might wring your neck! Grimm reported, “The people dread her and are glad she has not shown herself this long while past.” Davidson doesn’t name this figure as Perchta or Holle, specifically, but she’s clearly suggesting that these figures are related in that they all have similar roles. Perchta might help you finish your spinning if you have been working hard at it every day, or she might set it all on fire if you haven’t spun it in time for her feast day. She probably wants you to be productive with your weaving, too, which is why you can’t just abandon it without a proper expression of your intention to get back to it in a timely manner.

So, here’s another possible answer to the question, “Why was it fun to burn flax on Rock Day?” Perchta or Holle would tangle or burn your flax if it wasn’t spun by a certain mid-winter deadline. Maybe the deadline was the night before December 25th, the beginning of the mid-winter spinning prohibition, or maybe it was January 5th, the end of it. Either way, whatever was left unfinished was destined to be destroyed. If the goddesses didn’t do it, the ploughboys would. Maybe they were doing this work on behalf of the goddesses. Out with the old, in with the new. Try harder this time. What’s dead is dead and you can’t have it anymore. Now it’s time for new life and a fresh start. It’s time to plow the fields and plant the new crops. Get ready for Plough Day.