I have been running into quite a lot of problems with my ryas. Needless to say, this is frustrating and time-consuming. It is also stressful because I have a show at the Shelburne Arts Co-op, with Amanda Quinby, in October. I had envisioned a certain schedule to be ready for it, and I am now way behind schedule. Way.

First, my “nest” rya turned out terrible. Well, the top third is terrible. I didn’t realize the magnitude of the badness until I cut it off the loom and could view it at a distance. By this point, it was too late. This occurred on April 13th, but I wasn’t up to writing about it at the time. I was too sad to think of a solution and new madder shoots were much more exciting. Here is the problem, i.e., the top of the design: 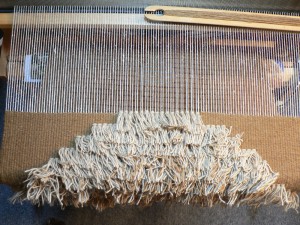 The steps that form the rows of knots do not in any way convey the feeling of a circle. Right? It’s sort of pyramid-like, which would be OK if I was going for “pyramid.” But I’m not. The bottom part of the rya has a very satisfying circular shape, because the pile covers the steps. So, the bottom looks great and the top looks bad. The design is disharmonious, to say the least. After thinking about it for a while, I am now hoping that I can undo the top of the rya by hand, off loom, and still have something useful. I’m not yet sure if this is actually possible. I will write about it either way.

Hurriedly, I commenced with my next project. Can’t wallow in despair, after all, time’s a wastin’. It all went very well to begin with. Here are some cute photos of the cat helping me to decide which color background to weave, white or brown: 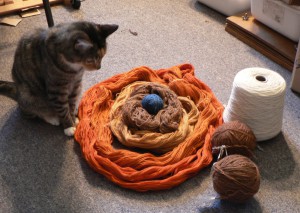 Actually she was considering whether or not to lie down on this pile of yarns. And she did. 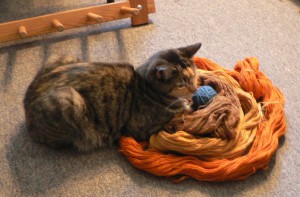 Initially I picked the brown for the plain weave background, but after weaving 4 inches of hem and border, and a few rows of bright orange, it was obvious that the brown and the orange were not getting along. So I unwove all that, happily enough, and switched to the white. The white was pleasantly crisp, and got along very cheerfully with the orange. So far so good.

I was loving the white, but gradually realized that the end of the warp was coming up sooner than I thought. I dropped a couple rows of rows from the design hoping I could squeeze it in. The proportions were different, but the design still looked nice. Rectangular rather than square. No problem! So I kept weaving. It was Optimism Versus Warp. 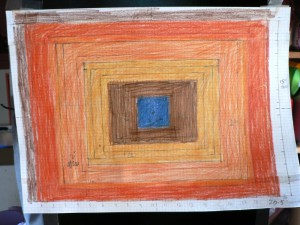 Cheery, right? The oranges are from orange cosmos, one of my favorites. But the end of the warp crept closer still. My optimism waned. Finally I couldn’t escape the inevitable conclusion that this rya was done for.

Here’s the end of the warp: 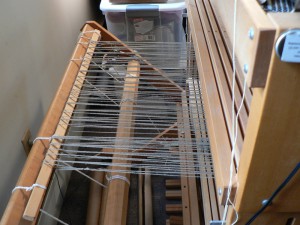 And here’s how far through the design I was:

Half-way. I could probably have gotten about 4 more inches out of the warp, but that wasn’t enough. So, I unwove the whole thing. I saved all the weft and I will re-weave this design on another warp.

There is only enough room for a piece about 8 inches high, not including hems, on this warp. Even though 8/4 linen was on sale at Webs this month and I stocked up, it’s not exactly cheap. What to do with so little warp?