Spring has sprung here in our corner of Massachusetts, despite the sleet and hail yesterday. Today Matthew and I went to check on the madder at my dye and fiber plant garden at Bramble Hill Farm.

The madder has been there for three summers now. It likes the location, and has been spreading very nicely. After trying to keep it contained for the first couple years, I decided to double the width of the bed this season. So, today Matthew and I dug up the roots and shoots outside of the parameters of the new bed.

Here are some madder shoots in situ at Bramble Hill. 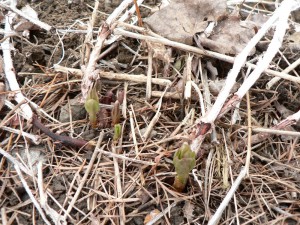 The white papery stems are left from last summer. They are dead but still prickly.

Here I am unearthing a nice fat root. It’s the thin, reddish colored thing in the soil that I’m reaching for with my left hand (not the clump of weeds in my right hand). 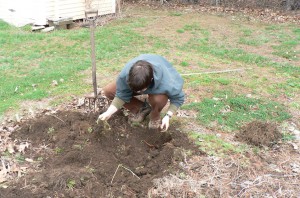 Here are some of the roots. They are a decent size at last! 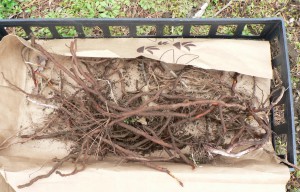 Madder is important to me because it is one of the few plant-based sources of red among the natural dyes, and in theory it will grow in my climate. I have been growing madder for many years. More than 10 years, as a matter of fact, maybe even 12. I originally bought the plants from Richters, and put them in a huge raised bed at my mom’s place in New Hampshire (alongside the Lady’s Bedstraw that I posted about in the fall of 2011). They lived there for a long time until at last about three years ago I dug up that bed and transplanted some plants to the Bramble Hill garden. In theory you can harvest madder roots after three years of growth, but the roots never got as robust as any that I’ve bought commercially, even after many years. The yield from the bed in New Hampshire was really pathetic and I was very disheartened.

But happily these roots from Bramble Hill look more promising even after only three years. Here’s a close-up. 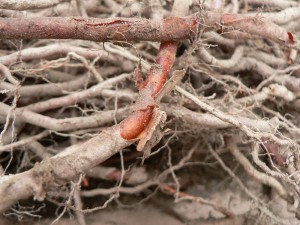 I will transplant some shoots into pots here at the apartment, though I’m not sure where they will be destined to live, ultimately. Ideally I would like to grow acres of madder and would be able to offer local dyers a respectable quantity, but obviously I’m still working on that grand plan.

2 thoughts on “Madder is Up”