Earlier in November, another teacher at school wanted to dye some cloth to create kid-sized monarch butterfly wings as part of her classroom study of butterflies. Her initial dyebaths, composed largely of marigolds combined with some orange cosmos and wild bedstraw roots, had not yielded the color she wanted. I suggested over-dyeing the cloth with madder roots, even though they weren’t from our garden at school. She decided to use some chopped roots that I had bought from Aurora Silk a few years ago, and was pleased with her results.

I asked her to save me the exhausted dyebath and the roots, which she very kindly did. I spent every spare moment of the next two weeks happily creating various shades of pink and orange on linen and cotton-linen blend yarns. I was well-satisfied with my efforts! Here they are: 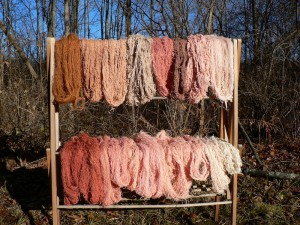 Here’s a close up of the top rack: 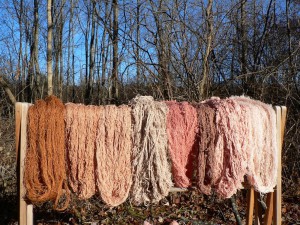 A close-up of the lower rack: 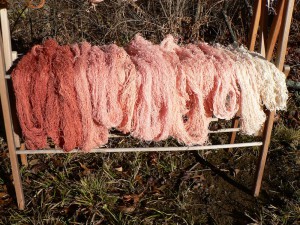 These yarns are from a 2nd extraction of the roots. The skein on the far right is the original color of the yarn (white but not bleached). All these yarns are cellulose, i.e., plant-based fibers. They are all either 40/2 linen or 8/2 cotton-linen from Webs. They were all scoured using Earthues‘ anionic scour at 5% weight of the fiber (or weight of the goods, shortened to WOG) and soda ash at 2% WOG. I dissolved the scouring agents in hot water, added the fiber in 8 oz. batches, brought up to 180F for 30 minutes, removed promptly, then washed again with laundry detergent (I use Ecos or Seventh Generation) and rinsed.

I mordanted all these yarns with aluminum acetate from Earthues (purchased from Long Ridge Farm). For the first 8 ounces of yarn, I mordanted at 5% WOG. I dissolved the mordant in hot water, then added the yarns, maintained the pot around 100F for one hour, cooled overnight, then rinsed quickly before dyeing. In actuality, the mordant baths often exceeded 100 degrees, but the higher temperatures didn’t seem to hurt anything.

I have tried to be more mindful about mordant use since reading Rebecca Burgess’ book Harvesting Color. Like many dyers, I am concerned about the environmental impact of mordants, and I appreciated the data she offers in her book. She had a lab test exactly how much mordant is absorbed by the fibers in a mordant bath. It ranged from 20 to 50 percent for aluminum sulfate. Even though she doesn’t specifically mention alum acetate, 50% seemed like a good rate to me.

I mordanted *without* tannin this time because I wanted clear colors without any brown tinge. The one exception is the dark brown skein on the top rack, which is 22/2 cottolin from Sweden, originally dyed with umbilicate lichens, and treated with tannin in the mordant process. It was a blah brown and I was trying to warm it up a little with the madder.

The initial dyebath that had been used to make the monarch wings was already partially exhausted. I wasn’t sure what color to expect from it, but I anticipated two possibilities. If the roots had been well-soaked and the cloth was allowed to sit a long time in the dyebath, then a lot of red would have come out already, and I ought to get pink. If the temperature had gotten close to boiling during either the extraction of the roots or the dyeing of the cloth, I might get a brownish pink or terra cotta color (because high heat shifts the color toward brown). Neither of these occurred. Here’s what the skein looked like after about 30 minutes, and then after heating around 150F for an hour: 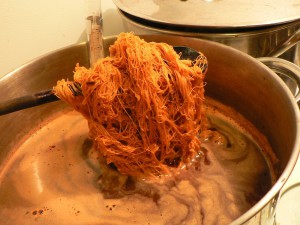 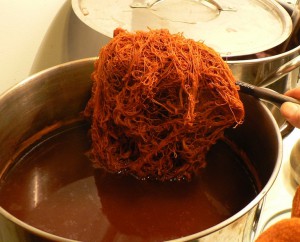 Here’s the yarn stretched out a little. 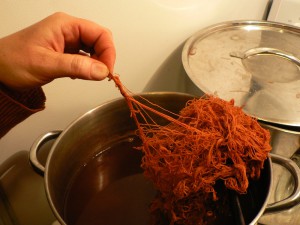 It is a spectacular color, but I have to admit I was a little surprised at how orange it was. I have never gotten such an orange color from madder before. How did it happen?

Here’s my theory. Thanks to the bustling pace of life in the classroom, the initial extraction of the roots was fairly quick, and only some of the dyestuff from the roots actually went into solution. The colors that came out into the dyebath first were yellows and browns. Hence my luscious orange. My next post will have a lot more detail about how I think this happened, and how I eventually got pink.