Today was a very productive day. I had the day off. It was mostly sunny and warm. And, despite weeks of frosts, the ground was still workable. We’re supposed to get lows in the teens and highs only in the 30s later this week, so I was very motivated to take care of some outdoor tasks before the really cold weather rolls in.

I already wrote about digging up approximately one third of my madder bed a couple weeks ago. I already rinsed some of the madder roots I dug up, and they are already dried. I didn’t document that earlier batch. This morning I rinsed the rest of what I had dug up the other day.

Here is a brown paper grocery bag full of dried but still dirt-covered roots. I hadn’t planned to dry them first, it’s just that I didn’t manage to rinse them off before they dried. Fortunately I didn’t have any issues with mold. 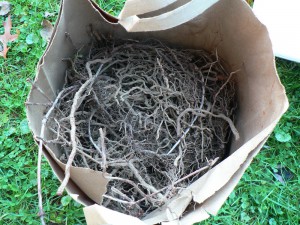 There was quite a lot of dried dirt at the bottom of the bag after I took out the roots. 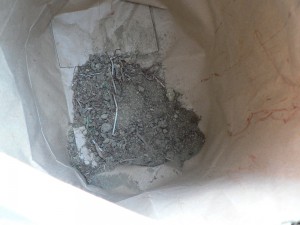 I put the roots into a tub and rinsed them with about 20 gallons of warm water. 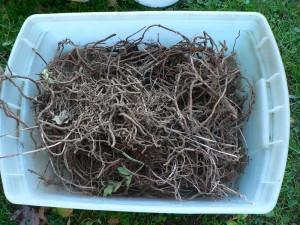 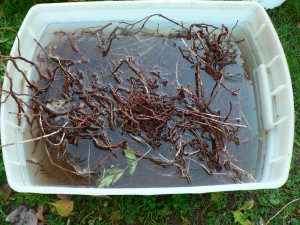 Even though they had been in a paper bag in the hot water heater closet for a couple weeks, some leaves managed to stay green. I trimmed off the above-ground portions of the stalks with clippers.

Here you can see how eager the madder was to grow despite adverse conditions. Madder is a member of the bedstraw family, and it is a typical bedstraw trait to grow new shoots from the nodes of the stalk. I have to admit I was kind of amazed at how wrinkly my palm is when I looked at this photo after I took it.  After digging up a lot more roots today, rinsing them, and planting garlic this afternoon, my hand are very rough indeed this evening.

The vibrant color of the red roots quickly re-emerged once they were wet. In the photo below you can see some dried stalks, a very red root with some of the skin rubbed off, and a yellow-orange shoot trying its best to grow. It was still sunny at this point in the morning, hence the reflective blue in the water. 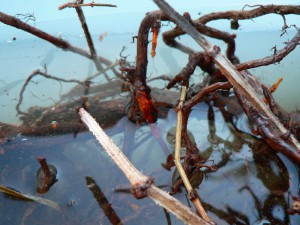 These very yellow, almost neon, shoots would grow into new plants if they had the time to do it before winter sent in. I think the color is incredible. 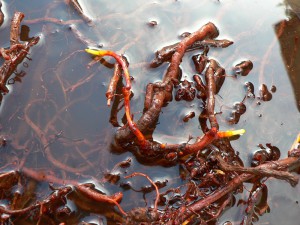 I rinsed the roots twice. To capture any small pieces of roots, I poured the rinse-water through a sieve. 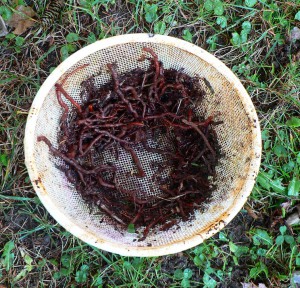 I spread out the roots to dry on a length of brown paper laid over milk crates. It was windy earlier today, so I tried to prevent the paper from flapping with some of the tubs and buckets I used for washing. 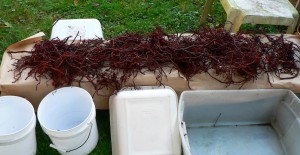 Once this was all done, I went over to Bramble Hill to dig up the middle portion of the bed. The roots from this middle part filled one grocery bag (quite a bit less than the first area I dug). I came home and rinsed those as well. The roots I washed earlier in the morning had dried quite a bit in the meanwhile, which you can tell by looking at how much lighter their color is: 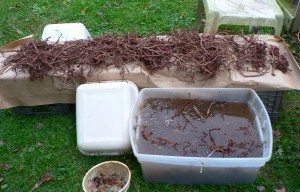 Tonight there is a strong likelihood of rain or snow, so I had to get it all indoors before the precipitation arrived. I have a tendency to spread my projects all over the apartment, but I decided to set up the still-damp roots up in the room with my loom. The first photo below shows the madder roots resting on towels on top of milk crates. The second photo shows a broader view of the room with my loom and some drying marigolds and other supplies. It is hard to even walk into the room at the moment. 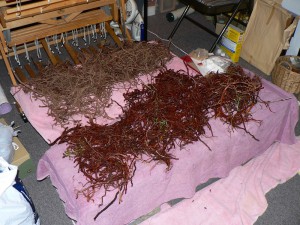 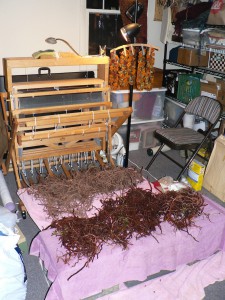 A scene such as this is pretty common in our apartment. I actually like the fact that the madder is taking up so much space. For one thing, it smells nice. Sort of fruity. More importantly, I have been waiting for years to harvest this crop, and I don’t want the thrill to be over too quickly. This harvest feels momentous, so I don’t mind that it takes up space.