I discovered something interesting about marigolds at Mass. Sheep and Wool. In a nutshell, an acidic dyebath yielded olive green whereas an alkaline dyebath yielded yellow.

Here’s how I found out. I made the marigold dyebath during the demonstration on Saturday May 24th. Here’s a photo of the marigolds in the dyebath: 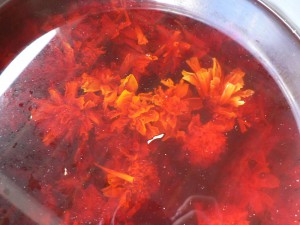 During the Sunday demonstration, I strained out the blossoms. Here are the strained flowers. They were still really strong and temporarily stained my hands orange! 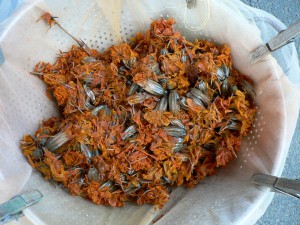 I put a 4 ounce skein of 4-ply mill end wool from Webs, premordanted with aluminum sulfate, into the dyebath. At once, the skein began to turn olive green, which surprised me. I was expecting yellow. It sat and heated for most of the two hour-duration of the demonstration. Here’s the skein in the dyebath after about an hour: 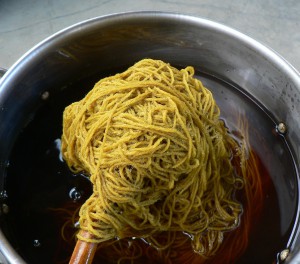 Near the end of my demo, a family from the school where I teach stopped by, along with another family. Since I’d brought pH strips and some dissolved soda ash, I decided we would try to get to the bottom of this unexpected olive green color and do little science.

We tested the liquid in the marigold dyebath, and it was pH 5. Not what I was expecting. I was just using tap water from home, so I am assuming the acidity came from the plant material. I didn’t think to test the water ahead of time. We added dissolved soda ash until the bath was pH 8, and put in another skein. Presto change-o, we got a rich mango-yellow. 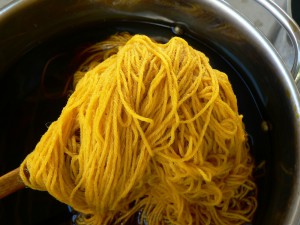 This skein sat in the warm dyebath for about half an hour, but with no additional heat. When I got home that evening, I put in a third skein of wool, heated for an hour, and removed to drip and dry. I typically re-use a dyebath as many times as possible to extend the range of color. This is called “exhausting” the bath.

Here are all the skeins at the end of the day Sunday. In this photo they are still damp and haven’t been rinsed: 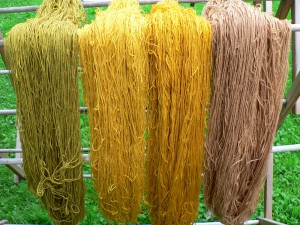 Finally, I decided to see if I could shift the pH back down to 5 and still get olive green. By this point the bath was pretty tapped out, but I wanted to give it a try.

Over the winter I came across some white vinegar at our local Chinese grocery store, Mom’s House, which claims to be 25% acetic acid. That seems very high to be sold over the counter, but here’s the pH test strip from the vinegar straight from the bottle: 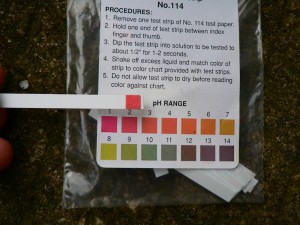 I shifted the exhaust bath back down to pH 5 and put in one last skein, 4 ounces of Bartlett’s wool premordanted with aluminum sulfate. That skein heated for an hour and sat in the bath overnight. The result was a light but bright wasabi-like greenish yellow.

Here are all the skeins this morning, dried, rinsed, and dried again. The final exhaust skein is on the far right in the picture below. 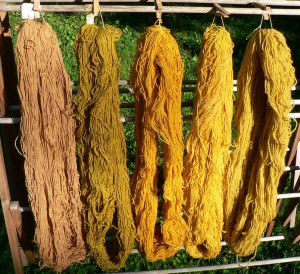 These skeins have been outdoors quite a bit, and when I was taking this photo this morning, I noticed some fading, unfortunately. At first I suspected that it was due to the fact that I rushed the process, and hadn’t really allowed the skeins to heat and soak as long as I normally do. I looked up marigolds in Harald Bohmer’s book Koekboya. He characterizes their light-fastness as “adequate,” but comments that the yellows fade in strong sunlight. The fastness may be improved with copper, he notes.