Way back on Memorial Day weekend, I was lucky enough to find some Japanese indigo seedlings for sale at the Massachusetts Sheep and Woolcraft Fair. I had been wanting to grow this plant, Polygonum tinctorium, for many years, but it’s not that easy to find seeds and we don’t have a good set-up for growing seedlings anyway here at the apartment. I had never come across seedlings before. In a fit of excitement, I bought out the vendor’s entire supply (11 plants) and planted them in the front bed at my dye and fiber plant garden at Bramble Hill Farm with maximum southern exposure.

They were nibbled by rabbits in June and July. I covered them with row-cover to keep the critters away, and they bounced back from that, thankfully. I also had the kids in my summer camp spray them with a chili pepper solution for good measure (along with the orange cosmos, which were suffering the same predations). After the plants got a little bigger, the leaves curled up and just seemed very narrow and spindly. I watered the plants a lot, since I read that they like humidity and water, as well as heat. But for much of the summer I was worried that the plants were unhappy because we had an unusually cool, dry summer this year.

Here’s a photo of some of the plants on July 31st. You can see them in between the marigolds in front. They were pretty small, even smaller than the marigolds, which were not very big yet. 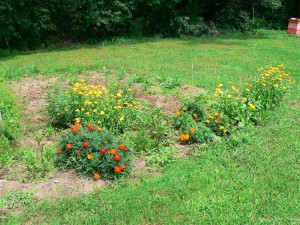 You can also see that we already pulled up the flax (the empty bed in the back), that the weld hasn’t bolted yet (short rosettes on the far right), and that I haven’t put in the swamp milkweed yet (empty bed behind the amsonia and calendula). Early days in the dye and fiber garden even though it was well past mid-summer.

Here’s a close up of the Japanese indigo plants on July 31st. 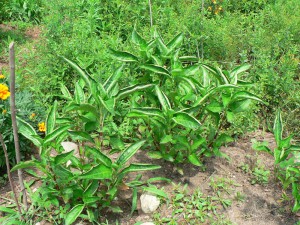 I think the curling leaves must be a feature of the plant. They never flattened out, even in hot, rainy weather.

At last in August the plants began to look lush and I figured they were ready to harvest. The very week that I was planning to pick the leaves for a vat, I noticed pink flower buds! Here are some photos of the buds on August 18th. 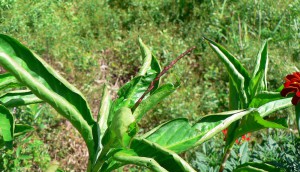 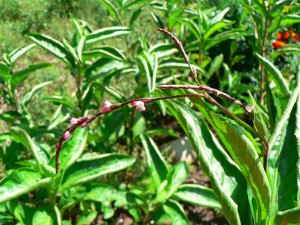 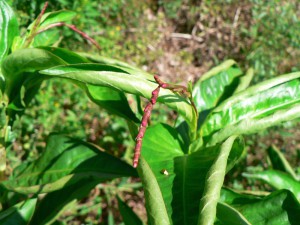 According to Rita Buchanan, my go-to source for growing dye plants, they do not produce much color once the plants have begun to bloom. So, I decided to let them bloom and hopefully set seed.

Here they were on September 8th. The flowers have opened up and there are a lot more of them. 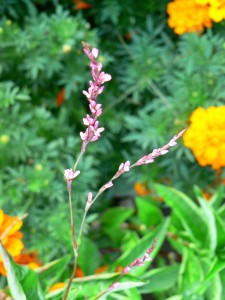 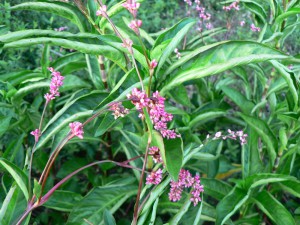 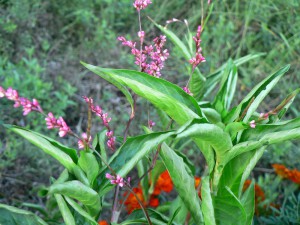 They set seed late, apparently, and I may still have to build some protection around them if we get early frosts. Tonight it’s supposed to be in the low 40s, which is early for such cool weather around here. There are beehives right next to my garden, so hopefully I will get some seeds and can grow out more plants in the spring. I may have to impose on someone for greenhouse space, but it’s exciting to imagine that I might have a significant crop next summer.