This is a follow-up to my recent post about fiber flax seed maturity. After I posted it, I realized that I have a lot more photographs depicting the things I was trying to describe. So, here’s a bit more visual detail.

Let’s revisit the problem of dehiscence. This would mean that mature/over-ripe seed pods, bolls, or capsules would a) fall intact from their teeny withered stems onto the ground or b) shatter, pop open, and drop their glossy seeds willy-nilly on the ground. As a seed-saver, I was not in favor of either of these possibilities.

Here’s a glimpse of my initial attempt to bag up the seed pods, as suggested by Carolyn (though I do not blame her for my inadequate design!): 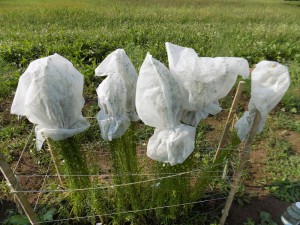 As you can see, it looks like I am making bizarre and potentially offensive puppets. Moreover, my tubular bags didn’t actually enclose all the ripening seed pods. Wind and other forces allowed the bags to move upward on the stalk, so eventually they were not entirely covering the flowering portions of the plants. I visited the plot (almost) daily and could pull them down and adjust them, but it was not a perfect solution so I didn’t bother to sew these little bags for any of the other mini-plots. 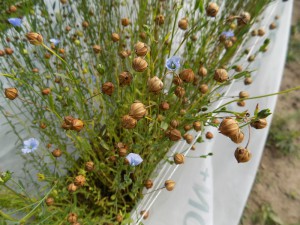 This photo above is the variety named Viking on August 14th. I think it is, or was, commercially available in Canada, but I’m not so sure about the US. Click on the image for a close-up, and hopefully you’ll be able to see:

The brown/tan color of the seed pods (they also feel dry and sound rattle-y to the touch, but I doubt you can feel or hear that from a photo)

The deep brown, shriveled appearance of the little stalk that connects the brown seed pod to the main stem (sorry I don’t know the botanical term for that).

The thin, dark splits along the length of the pod/capsule.

The teeny opening at the pointy tip at the top of the pod.

Below is a wider view of the stand of Viking plants:

The type nick-named 5NN was at a similar point on August 13th. A lot of seedpods were mature, but a lot were still green, and the stand was still producing buds and flowers: 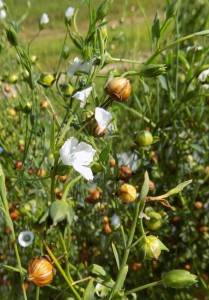 When I looked on the ground inside each isolation tent, I found whole ripe pods that had dropped off, but I couldn’t see individual seeds. This may just be a problem with my middle-aged vision, or it may indicate that fiber flax seeds drop off intact rather than splitting open. Either way, I maintained my seed-pod snipping protocol for each mini-plot, as described in the previous post.

Some varieties seemed to mature more consistently than others. For example, here’s the type nick-named Soctoss on August 14, 2015: 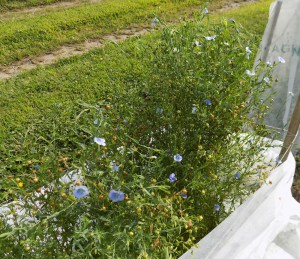 It seems to be mostly done flowering. There are certainly a few lush flowers: 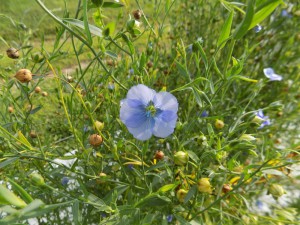 But there are not that many new buds, and on the whole the plants seem to be moving past the active growth phase.

A similar thing was happening with the type nick-named Lisa: 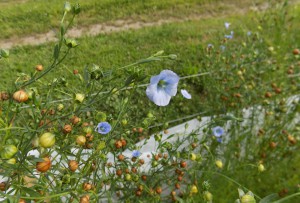 There were certainly new flowers between August 13th and 14th. However, most of the seeds were ripe as evidenced by the fact that something had clearly been trying to eat them. The photo below shows a chewed-up Lisa seed boll, and illustrates another problem of seed maturity: predation by intelligent creatures looking for oil-rich food sources! 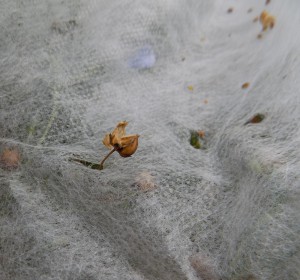 OK, fine, I’m not sure whether the stiffness of the mature seed pods and their supporting stalks were sufficient to poke through the Agribon and expose the seed pod, or whether an intrepid seed-eater used its beak or other physical attributes to cut through the fabric.

Either way, the seeds were exposed and taken advantage of: 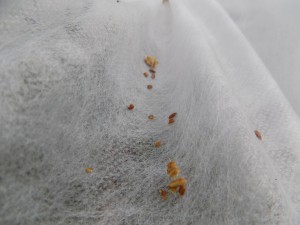 I obviously cannot claim to have solved all the problems pertaining to seed maturity!