I have not done much dyeing lately. My last dye day was on September 6th when I ran my second Japanese indigo vat. Since then, I managed to rinse and dry the skeins, but didn’t get much further than that. They’ve been sitting in a tub waiting for closure. On New Year’s Eve I finally wrapped up that loose end.

As I noted in my original post, I don’t have good photo-documentation about that vat. But at least now I can show you photos of the skeins I dyed. All the yarns are wool. Here are the blue skeins. 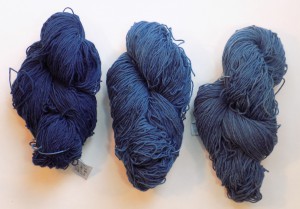 They were originally dyed in August in my first Japanese indigo vat. Two were very light after the first vat. One was a decent medium blue but I figured I could get it darker. Each skein is about 4 ounces.

I always (or almost always) take little samples for my notebooks so I can refer back to what I did in the past. I aim for written, physical, or photographic documentation (or some combination of the three) because my memory is otherwise terrible. In this case, it was helpful to see just how different the colors were before and after the second vat.

In each pair, the teeny skeins on the left are the colors from the August vat. The ones on the right are the over-dyed skeins from the vat in September. You can see that the two skeins which were originally very light did get a lot darker. The skein in the middle which was already a medium blue didn’t change much.

In the vat on September 6th, I also overdyed some skeins previously dyed with tansy. They were mordanted with aluminum sulfate. Each skein was teensy, about a half ounce. I had prepped them for a workshop for Massachusetts Agriculture in the Classroom last year (October 25th, 2014). Since it was billed as a day of “hands-on skills” I had assumed everyone would want a small sample to take home. But it didn’t turn out that way, so I ended up with a ton of teeny yellow skeins. Apparently I didn’t have the presence of mind to photograph or take samples of the original colors, alas. Suffice it to say that tansy yields yellows, ranging from dull to bright, and is pH sensitive: the more alkaline the solution, the brighter the yellow. I had used a soda ash solution in the demo, so the original yellows were pretty bright.

Here are the greens I got in September. Each little bundle is a group of 5 or 6 teensy skeins which I treated as a unit when I submerged them in the Japanese indigo vat. The yarns are all wool, but they are a mix of plied and singles, from different sources. Each little bundle weights between 2.6 and 3.2 ounces. 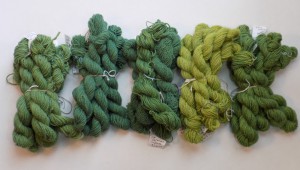 Matthew helped me take the photos. Often I take photos outdoors with natural sunlight. It wasn’t an option the other day, though. After a warm fall and early winter, on New Year’s Eve it was icy and slushy outdoors, so we set up a little photo shoot by the back door where there was a little natural light supplemented by three of our desk lamps. As we were setting up, Sammy our cat had to check things out, of course. Here I am arranging skeins while Sammy inspects the set up: 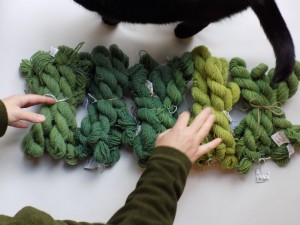 I am very happy with the colors, even though the quantity is minimal.

Here’s to a more productive year of dyeing in 2016.