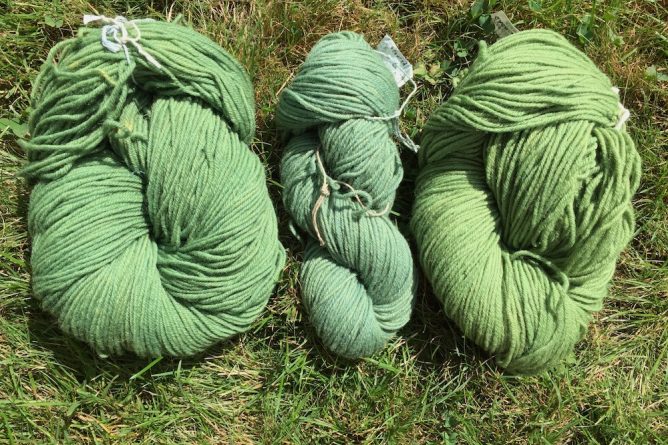 This has been an extremely prolific year for Queen Anne’s Lace, also known as wild carrot or Daucus carota. It is absolutely everywhere!

Back in July I ran two dyebaths with fresh Queen Anne’s Lace flowers. Since it’s so abundant, I decided to just use the flowers this time, though you can use the whole plant. For the first dyebath, I had no trouble collecting 30 oz. of flowers from various spots around Amherst, including the sides of parking lots, the side of the road, and next to bus stops.

The flowers are incredibly fragrant and sticky, and consequently they host a huge range of insects. When you pick the flowers, all the insects come along, too. This fact gave rise to a new house-hold rule: 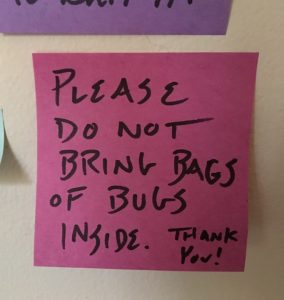 I weighed the plant material outdoors! I also made the first dyebath outside on the portable electric stove outdoors. We had some rainy weather after that, so I made the second dyebath indoors using 24 oz. of flowers that I picked in Hadley.

Here’s a pot full of flowers: 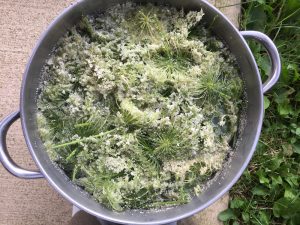 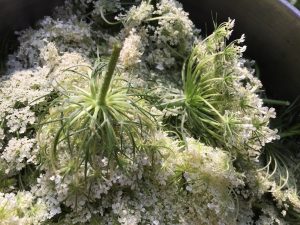 For the first dyebath, I filled the pot with water, heated it to 140 degrees, maintained that for an hour, and then let the plants soak in the pot overnight. The relatively low temperature was due to the fact that my portable electric burner has two rings. One of them can get very hot, but the other only has a “simmer” setting. The Queen Anne’s Lace was on the simmer side, while I mordanted yarn on the other burner.

Here are the strained flowers after they were heated, soaked, and cooled: 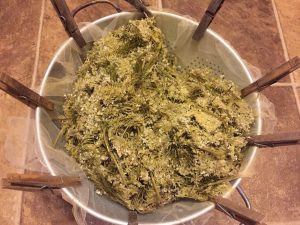 The dyebath looked reddish in the pot, but when I put some of the liquid in a jar, it was light gold. The little white dots are flower petals and maybe pollen that didn’t strain out.

For this project, I decided to over-dye some blue woad-dyed woolen yarn from last summer. I hadn’t bothered to mordant the yarn for the woad vat originally, so I had to mordant the skeins before overdyeing with Queen Anne’s Lace. I used aluminum sulfate at the ratios recommended in Rita Buchanan’s A Dyer’s Garden (1 tablespoon per 4 oz. of fiber). It looked pretty funny to put the blue yarns in a pot with clear water: 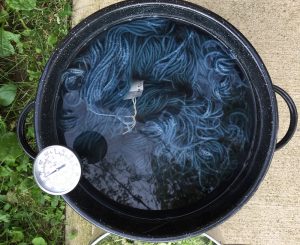 To mordant wool with aluminum sulfate, pre-soak the scoured yarn in water for at least an hour in a separate tub. Dissolve the mordant in a pot of hot water, then add the wetted out yarn. Bring the temperature up to 180 degrees, maintain that for an hour, then shut off the heat and let the fiber cool in the mordant bath as long as possible. In this case, it cooled overnight.

Here’s the skein while it’s still in the dyepot, shown with another skein of the same, original shade of blue for comparison. Colors are always darker when they are wet: 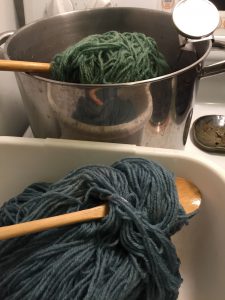 Here’s the green skein dripping and drying outside, amidst all the other gorgeous greens of July: 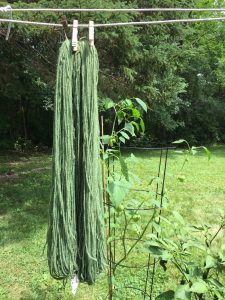 I used the first dyebath again to over-dye a 3 oz. woad-blue skein of wool, and got more of a slate shade of green (less yellow, more blue). It’s in the center in the photo below. When you use the same dyebath again it’s called “exhausting” the bath, and usually results in a lighter color. After the exhaust bath, I poured out the liquid.

The second dyebath I made a couple days later wasn’t quite as strong, only 24 oz. I heated it to 200 degrees, maintained that for an hour, and cooled it overnight. Again, I got a beautiful shade of green on a woad-blue skein. Here are the three skeins once they were all rinsed and dried: 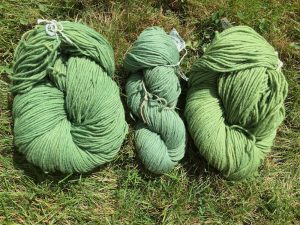 I used the exhaust bath from the second dye bath to over-dye 7 oz. of mohair. It was an extremely pale gray-blue from an exhausted woad vat last summer. I ended up with a sort of pale silvery gray. which was not what I was expecting. In the photo below, there’s a light-yellow lock on the top left corner that shows what the color would have been if the mohair wasn’t already gray-blue. 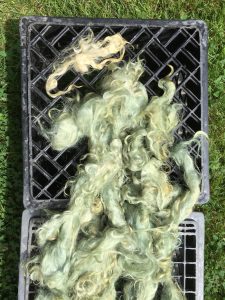 There is still plenty of Queen Anne’s Lace blooming now that it’s mid-August, but I may turn my sights to other plants next. Goldenrod, perhaps.