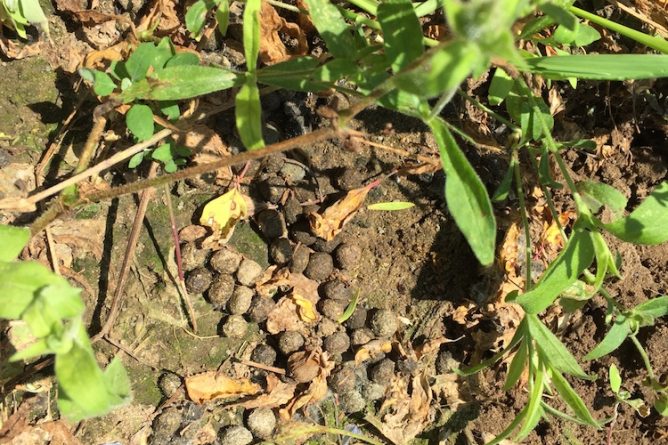 I had meant to post updates about my flax crop this summer in “real time”. However, “retro time” will have to do.

Here are a few things that I observed and learned as the 2017 flax was growing and maturing.

First, the flax chewers who devastated my crop in 2016, and half of my crop in 2015, were back at it again this year. However, when you have 1500 square feet of the same variety (Electra from Biolin), rather than tiny test plots of 12 square feet or less, the effect of the damage isn’t as troubling. I found dozens of chewed up flax stalks, but it was a negligible percentage of the whole crop. I am sticking to my hypothesis that the culprits are rodents of some kind. Here’s some scat that may or may not belong to them: 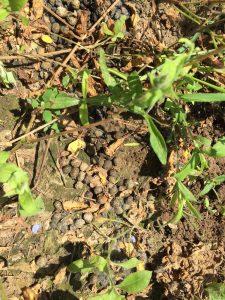 Second, the chewers are not solely interested in flax. It might not even be their favorite or preferred plant to chew. The fact that flax is *my* preferred plant in that location means that it bothers me when they chew it. I don’t care about the other plants, so I’m less inclined to notice their demise. Predation of “weeds” is a boon, from a flax-grower’s point of view. But it’s possible that from the chewers’ point of view, it’s the flax that’s a nuisance.

The two most significant weeds in my plot were lambsquarters and campion. Since apparently most people spell that “lamb’s quarters” I guess I should adopt the convention. I found chewed stalks of both. Here are a few lamb’s quarters plants that had been chewed as they were going to seed.  On the left you see the entire stalks, and on the right a close up of the stalk where it was chewed. The diagonal angle is similar to the way the flax is chewed:

Campion plants were also chewed as they went to seed:

For comparison, here are some chewed flax stalks:

The pillowcase is there for contrast and scale. Yes, the lamb’s quarters were as tall as (and in many cases taller than) the flax.

Third, I can understand why campion is so hard to weed out. It had all gone to seed by the time I was harvesting the flax. Every time I pulled up a campion plant, I had an image of a million baby seedlings sprouting from my hand as I flung the plant aside. Basically I was sowing next year’s campion crop. This is the number of seeds from one pod. Every plant makes lots of pods…. 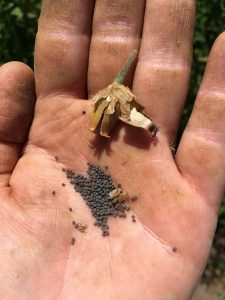 Fourth, not everyone knows what lamb’s quarters are. I was describing to someone how difficult it was to pull up my flax this year, and made reference to how many “lamb’s quarters” there were in the plot. They asked enthusiastically, “How much is that?” It had never occurred to me to think of the name as a unit of measurement, but now I love the idea! It does sound like a old fashioned measurement term.

The plant to which I am referring is a Chenopodium album. I went looking for the etymology of the name lamb’s quarters, but I’m not sure if I got to the heart of it. One source refer to Lammas, a harvest celebration on August 1 to bless the first loaves of bread. Personally, I am not sure how Chenopodium album fits into the picture. The seeds from C. album are edible and nutritious, so maybe they were an ingredient in a harvest-time loaf. I have never eaten the seeds, but I have eaten my fair share of lamb’s quarters. They are a delectable green vegetable, even more nutritious than the seeds.  But once the plant has gone to seed, the greens are well past their prime. In fact, they shrink up and often turn pink and fall off. Here’s another interesting article about lamb’s quarters. I may have to follow up on this question with better information.

Anyway, it isn’t a unit of measurement, it is a plant. A very useful and nutritious edible plant. It just so happens that it can grow as tall as me, and twice as tall as a flax stalk, and digging it up is very difficult.

Here’s what it looked like relative to the flax: 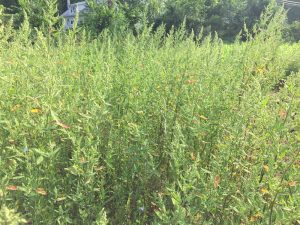 And here is a lone flax stalk surrounded by campion and lamb’s quarters: 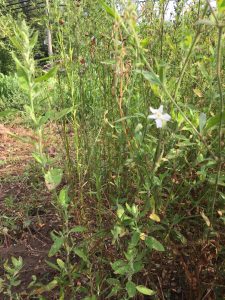 Lastly, there is a lot more going on with regard to the relationship of insects to flax than I have any idea about. What are these creatures doing? 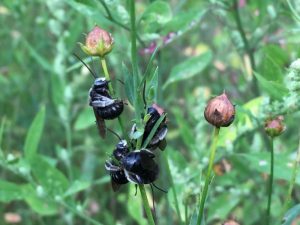 They were on the bolls as they were ripening. My guess is that they’re either eating them or laying eggs inside them. At the time I didn’t investigate further, but it might be important knowledge to possess.