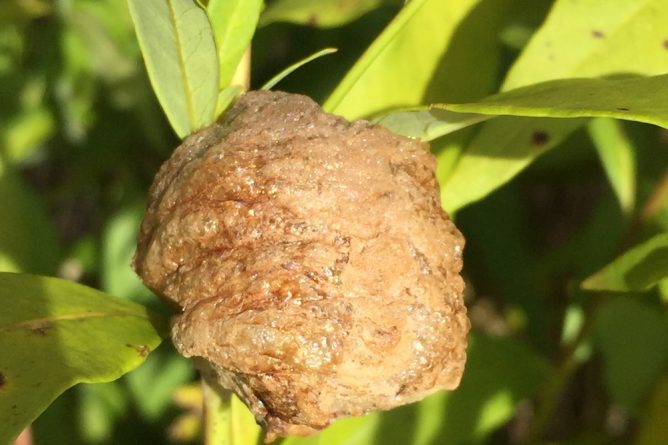 Here’s another reflection on the fascinating intricacies of plant-insect relationships.

Way back in April, I was prepping some beds to plant woad at our Amethyst Brook community garden plot. I noticed this egg case on a hyssop plant: 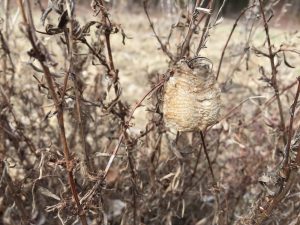 We were alarmed to discover that when baby mantises hatch, they will eat each other if no other prey is available. Yikes! We got them outdoors and out of the jar as soon as possible. And that was the end of that mantis egg rearing experiment.

I was happy to discover this egg case in the hyssop. The eggs overwinter inside the foamy case, or ootheca. The babies, or nymphs, hatch out when it gets warm. I was hopeful that they would stick around and find plenty of bugs to eat. Praying mantises are ferocious predators, and are considered by many to be a beneficial insect in the garden.

We have had many bug problems in the community garden plot over the years. Our highest priority problems have been bean beetles on the black beans (devastating) and three lined potato beetles on the tomatillos (disgusting). As with many insects, the larvae are actually the most destructive phase of their lifecycles. I have no idea if praying mantises actually eat bean beetle or three lined potato beetle larvae. One can only hope.

For the 2017 growing season, we had decided to focus mainly on dyeplants. Over the years, my woad there has suffered mighty predations from cabbage white caterpillars. You can read my earlier observations about their lifecycle here. In fact, I planted the hyssop because it is supposed to be a good companion plant for brassicas, and woad is a brassica. The adult cabbage white butterflies certainly liked the hyssop flowers as a nectar source, but the hyssop didn’t seem to decrease the number of caterpillars on my woad.

Fast forward several months to November. I was checking on the dye and fiber plant at Bramble Hill Farm, and noticed an egg case on the amsonia. Even though it is more round in shape and doesn’t have vertical ridges, I think this might also be a praying mantis case: 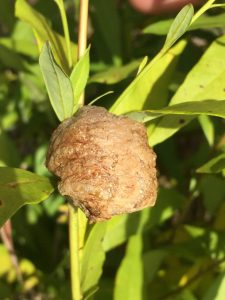 It turns out that these rounded egg cases are from species of praying mantises that were introduced from Europe and China in the late 1800s. Here’s a short informative article by UMass professor John Gerber. This page about mantis’ lifecycle from Iowa State extension is also helpful. The Carolina mantis, which is the native species of mantis that can be found around here, has a longer, thinner egg case.

I  wasn’t as happy to discover this ootheca on the amsonia as you might imagine. The discovery was too ironic for full-on joy. Behind the amsonia are a few unhappy swamp milkweed plants. In part, they have been unhappy because they are are on top of a dry hill, not in a swampy place, and that is my own fault. They are also unhappy because each year, they get infested with a revoltingly sticky conglomeration of yellow aphids. Sometimes I can keep on top of it, but not this year. The aphids were more prolific than ever before, and my swamp milkweed made thin, sad stalks. Texas Butterfly Ranch has some useful information about yellow aphids here. Apparently these yellow aphids really love milkweed plants.

I was relieved to discover that I am not the only person to have this problem, though my priorities are slightly different than other folks. Many people grow milkweed species to support monarch butterflies. In my case, these swamp milkweed plants are intended for bast fiber. I haven’t seen any monarch caterpillars on them, and I don’t think they are a preferred food source. A concern that many people have with regard to monarchs and mantises is that praying mantises are indiscriminate predators. They will just as soon eat a monarch butterfly as a cabbage white, so their role in the garden is ambivalent.

I found the presence of this particular egg case to be sort of annoying. Somehow, the mantises had managed to deposit an egg case about 12 inches away from my aphid apocalypse, but hadn’t been there to prevent it. Perhaps they are banking on their babies enjoying an ample food source next year. Insects do plan ahead, as we know. But where were they when I needed them?

I harvested the amsonia on November 23rd. 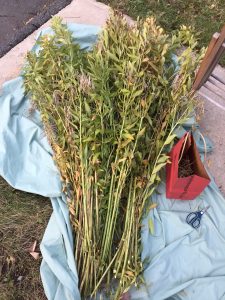 It grew really tall this year. Despite many nights of frost, the leaves had not yet entirely fallen off. I could have left them until later in the winter, but I didn’t want the seed pods to shatter and spread. I examined the stalks closely when I got them home, and the egg case was still there. Since we have a “Don’t bring bags of bugs in the house” rule, I propped up the stalk with the egg case on it at the edge of the woods by our apartment.

I hoped it would be dormant over the winter, and that I could bring it back to Bramble Hill to do its thing in the spring. Praying mantises must like aphids, right?  A few days ago we had our first snow fall, so I went to check on it. Something has been pecking at it: 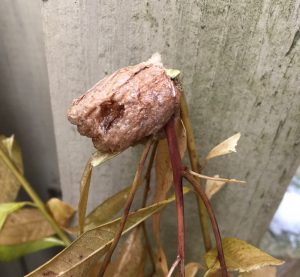 Perhaps we will get some praying mantises in the spring, but perhaps they have all been eaten. Time will tell.