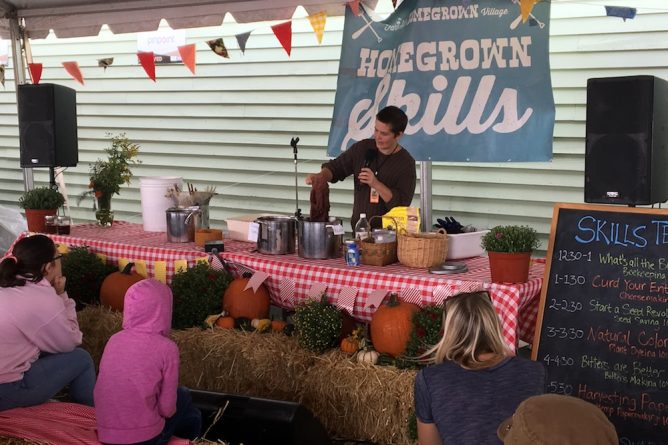 On Saturday September 22nd I did a natural dyeing demo at Farm Aid 2018 in Hartford, CT. Yes, Farm Aid, as in Willie Nelson, Neil Young, John Mellencamp, and Dave Matthews. It turns out that Farm Aid isn’t just a concert, it’s a day-long festival celebrating family farms and local agriculture. The festival has a huge focus on education. My table was in an area called the Homegrown Village, featuring dozens of organizations with creative, informative, interactive exhibits and activities. I was in the Homegrown Skills Tent, along with cheesemakers, beekeepers, papermakers, seed savers, and herbalists: a very interesting crowd!

It was a big thrill to be part of it. And I mean “big” literally. Despite the boggling complexity of logistics involved in pulling off such a huge event, everyone was incredibly friendly and helpful. I owe many thanks to the electricians who hooked me up with power to run my electric stoves, and then rescued our extension cords at the end of the day, to the volunteers who helped us unload and pack up, and to the person who was coordinating our whole area, Jessica Kurn. Thanks to everyone’s hard work and positive attitudes, it was a really fun day.

To read more about Farm Aid’s mission and projects, you can check out their website. Even though I had been aware of Farm Aid since they first started in the mid 1980s, I didn’t really know that much about the details of their work. So, it was inspiring to be at the festival and learn more about what they do. Before the Homegrown Skills Tent was open to the public, I had the opportunity to attend part of the press conference. There was a wide range of folks on stage, including many of the Farm Aid musical artists. There were also lots of farmers, and the agricultural commissioner of Connecticut.

The first short video that they showed was about the struggles facing small dairy farmers. I’d seen Forgotten Farms when it screened at Amherst Cinema in 2016, so I knew a little about the financial challenges facing dairy farmers. The Farm Aid video was very moving, and highlighted some of the incredibly difficult personal experiences of dairy families, including depression and suicide of family members. I wish I could have seen more of the press conference, but even the brief glimpse that I caught helped me appreciate the significance of Farm Aid’s support for farming families across the country.

OK, so what exactly was I doing there? I’d been invited to do a dyeing demonstration! I decided to run four dye baths that day with orange cosmos, marigolds, weld, and madder. I figured many people would be familiar with marigolds and cosmos, but not too many would have heard of weld or madder.

Here’s one of my very first visitors looking at the snazzy sign that Matthew made for me: 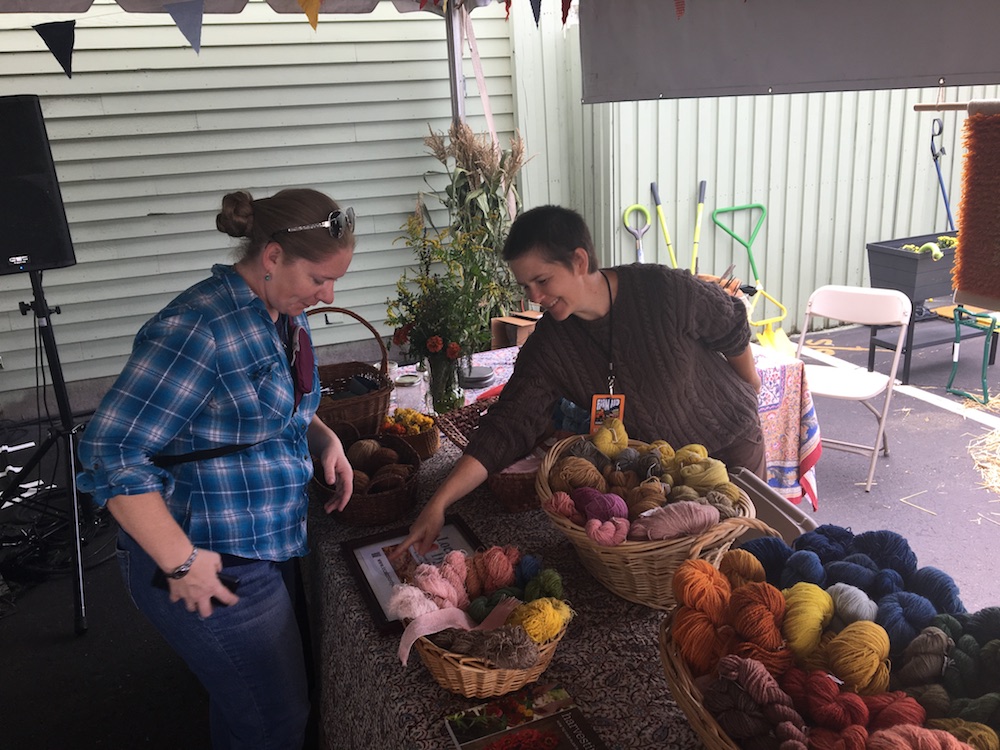 Matthew even figured out how to make one of those square-shaped puzzle-looking things that lets you link straight to my website if you have the right kind of reader on your phone. I felt very 21st century!

I brought two baskets of yarn showing colors that can be obtained from plants you can gather along the side of the road or in the woods, including tansy, goldenrod, Queen Anne’s Lace, curly dock, purple loosestrife, nettles, black-eyed Susan, yellow wood sorrel, black walnut hulls, and umbilicate lichen. That’s the basket closest to me in the photo, with the yellows, grays and pinks, and the basket on the far side of the table with all the different shades of brown.

I brought a big basket of colors from plants you have to grow in a garden, including Japanese indigo, woad, weld, orange cosmos, marigolds, and madder. That’s the basket on the right above. I also showed a couple types of animal fibers (different breeds of wool and alpaca) and various plant fibers (linen, cotton, bamboo, and tencel) so people could see how different fibers take the dye differently. I also brought four of my favorite dye books: A Dyer’s Garden by Rita Buchanan, Harvesting Color by Rebecca Burgess, The Art and Craft of Natural Dyeing by Jim Liles, and A Dyer’s Manual by Jill Goodwin.

Some of my samples show how you can shift the colors with a copper or iron afterbath. The skeins I’m holding here were dyed with purple loosestrife and iron: 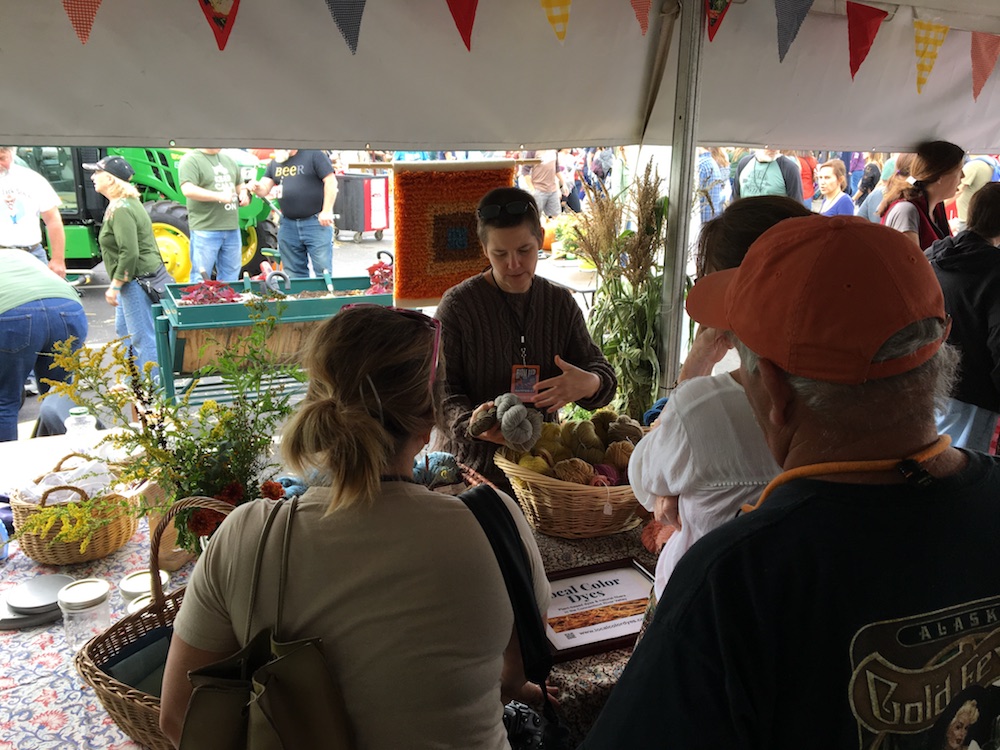 Knitters and other fiber people always love to handle the skeins. Since the whole point of a demo is to get people excited about the possibilities of dyeing with plants, I encouraged people to feel the different textures of the fibers. 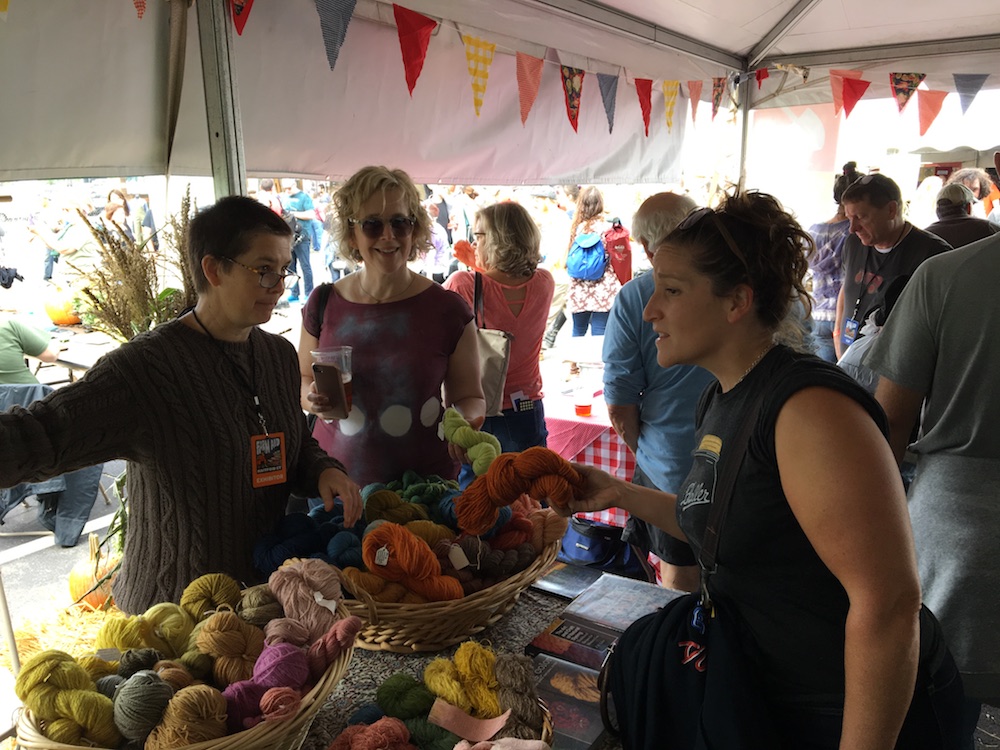 I went so far as to put alpaca into people’s hands so they could see and feel the difference compared to wool. I’ve got some small alpaca skeins in my hands in the photo below, ready to offer this visitor. The skeins I’m pointing to are linen: 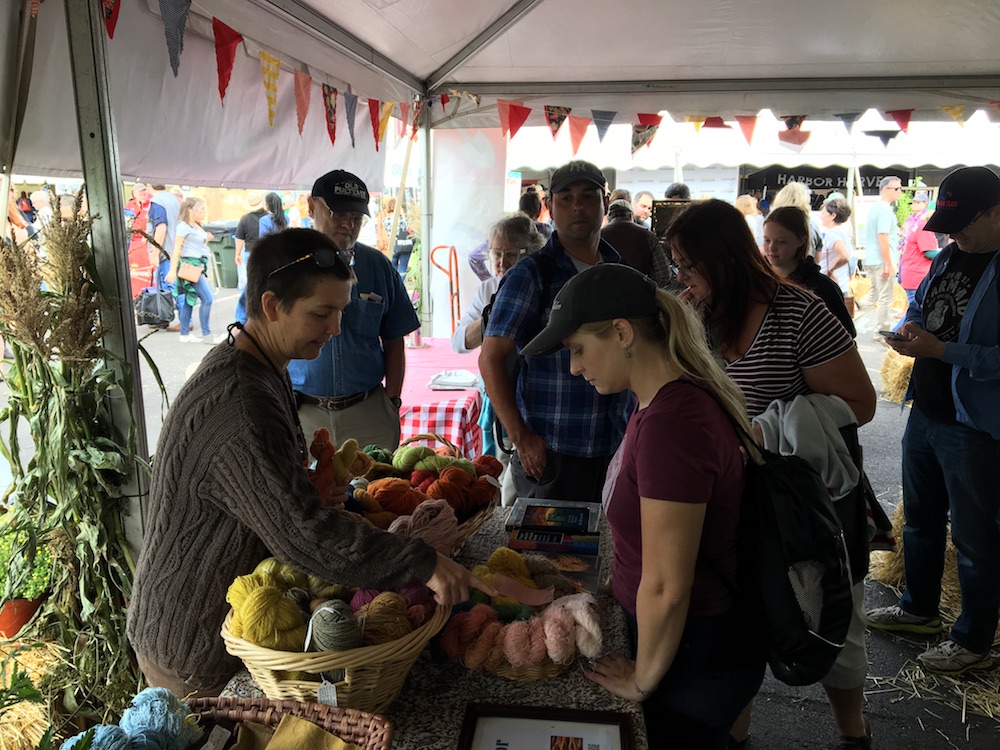 Here are the pots all in a row while I’m making the dye baths: 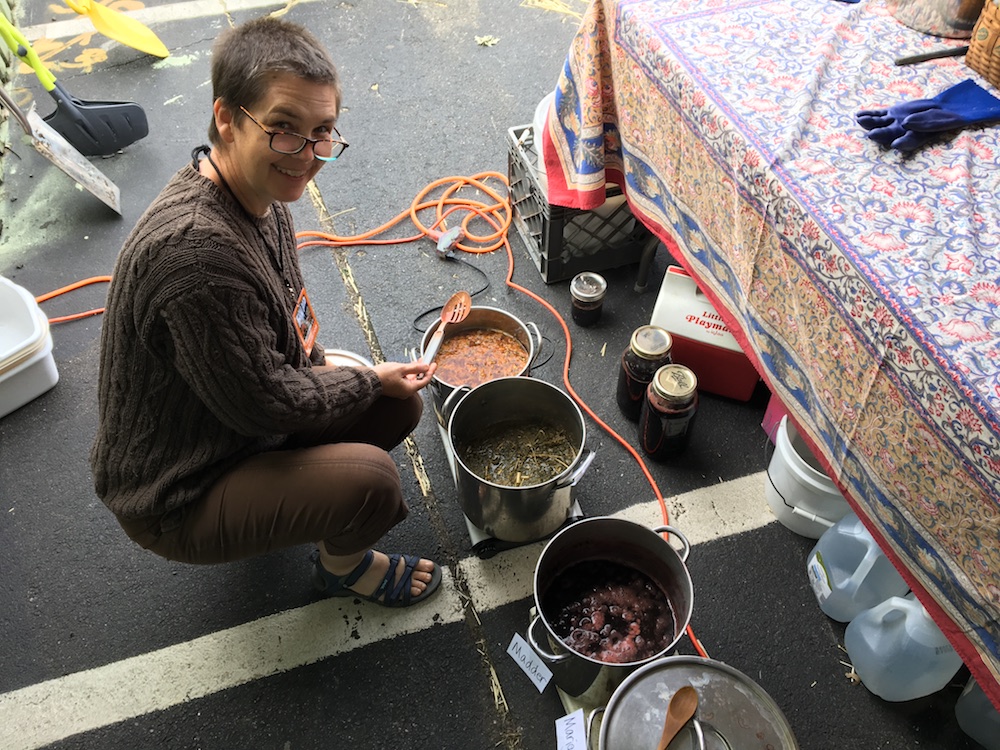 With so much going on, I had to label the pots or I was worried I’d do something dumb. I had already made a mistake with the madder when I was running around trying to pack up the van on Friday. I got distracted, and the bath almost got up to a boil, ~200 degrees. I usually try to keep my madder below 160 or so, and I was worried that I’d wrecked it. It turned out fine, thank goodness. I really love doing demos, but the only downside is that when I get talking with people, I forget to check the temperature or set the timer. 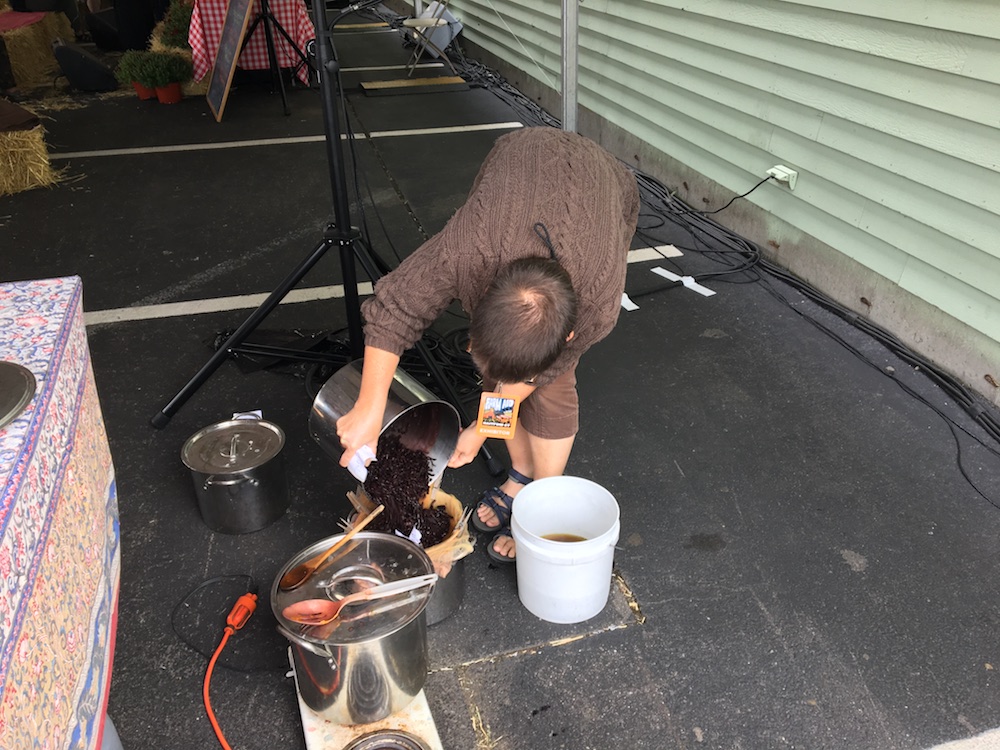 At 3:00 I had a 30 minute speaking slot. I decided to put the skeins into the dye baths while the audience was watching, so they could see the color strike. For this demo, all the skeins were 4-ply wool pre-mordanted with alum at a rate of 1 tablespoon per 4 oz. of wool and cream of tartar at 1 teaspoon per 4 oz. Each skein was approximately 4 oz.

This is what my set-up looked like during my talk. 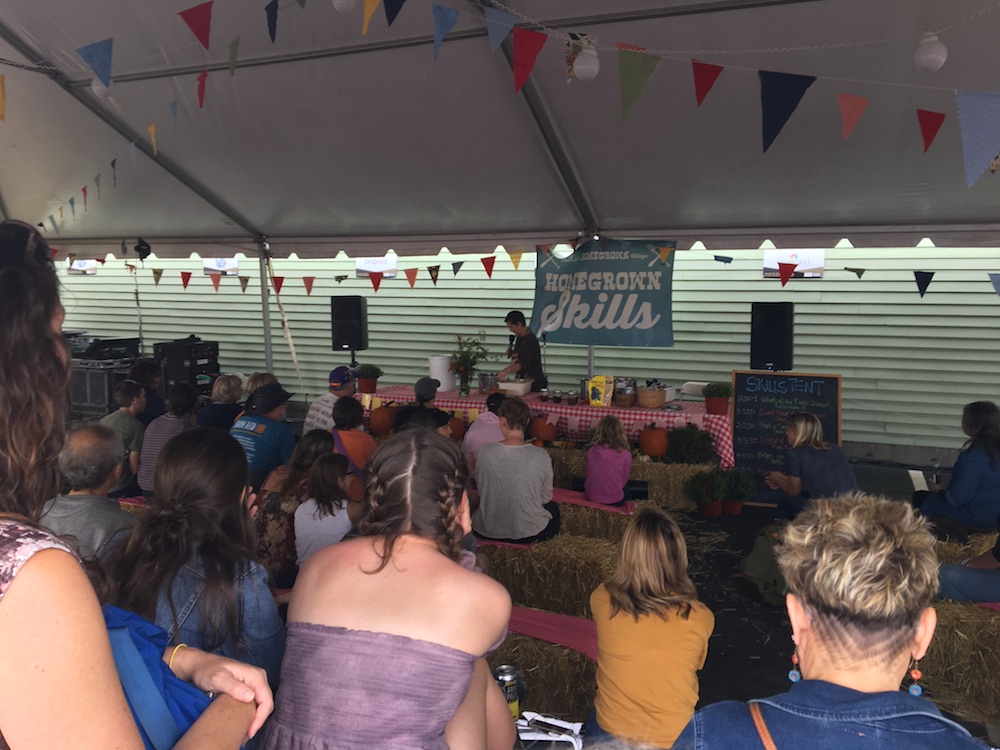 I tried to cover scouring, mordanting, and making a dye bath using a basic simmering-in-water method. I brought up some jars with the dye bath liquid in them to pass around so folks could get a closer look, small skeins to touch, and some dried weld and madder root for people to look at, since I figured those would be new to most people. I wanted to be sure to show and explain some of the chemicals I use, like aluminum sulfate, soda ash, and calcium carbonate, which I remembered to do, but I realized afterwards I forgot to show the pH strips, scale, and other important supplies. Ah well.

I had made the dye baths pretty concentrated, so the color strike happened almost instantly for the marigold skein and the cosmos skein. The madder was slower to take it up, which wasn’t a surprise. It was sort of purplish-gray at first. And the weld was light initially because I forgot to add soda ash to bring up the pH. I remedied that problem later. Here’s what the madder skein looked like from Matthew’s vantage point in the audience: 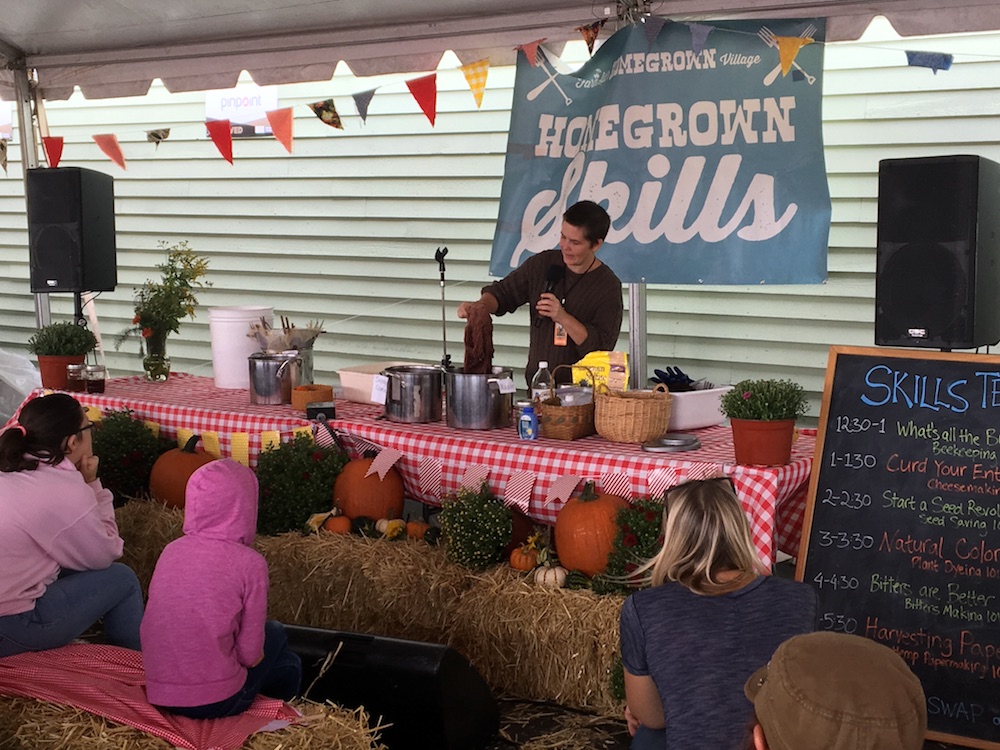 Questions from the audience included how to make blue with plants that grow in New England, and whether I had taken classes to learn what I know or had taught myself. The first was easy to answer and the second was trickier. I talked about Japanese indigo and woad as the two sources of blue for our region, if you want to grow your own plants.

In terms of my training, I have been fortunate over the years to have taken workshops with amazing teachers, beginning with Christine White (author of Uniquely Felt), and continuing with Michele Wipplinger, Kathy Hattori, Gasali Adeyemo, Jane Woodhouse, and Joan Morris. I have consulted with many other dyers and read many books and articles. But my favorite guiding principle is still this quote from Jill Goodman:  “Prove everything by your own efforts.” In the moment, I could only think to highlight Long Ridge Farm in Westmoreland, NH, where I’ve taken many classes, but I should also have mentioned Snow Farm in Williamsburg, MA.

As things wound down in the later afternoon, I decided not to put the dye baths with the skeins in them back onto the stoves to heat up. Instead, I let everything cool down so it would be easier to pack up and transport at the end of the day. So, the skeins steeped for a couple hours, then sat overnight in ziplock bags until I could heat them up for a full hour the next day.

I am still exhausting the dye baths, and will post again when all the skeins are done. Meanwhile, this image of the first weld and madder skeins drying on Saturday night will give you a sense of how things turned out. Vivid!