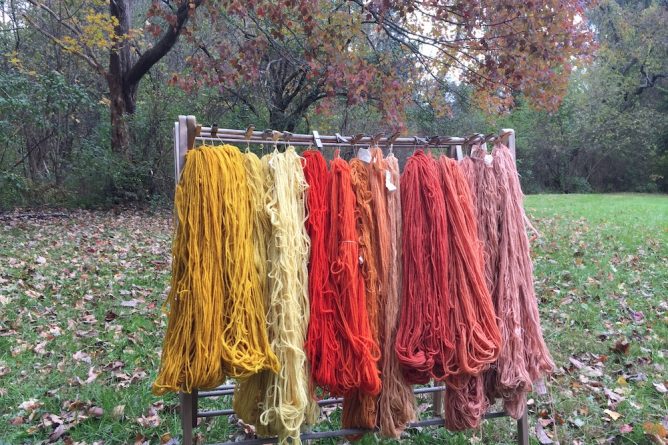 I have finally exhausted all the dye baths from Farm Aid! Here are some photos of the process, plus some of the ratios and measurements for each plant material. I didn’t keep close track of the times and temperatures during the demo itself because it was so busy. Each bath with the plant material heated for at least an hour, and some of them heated for longer.

As I mentioned in the first post, I used madder root, weld, orange cosmos, and marigolds. All the yarns at the demo were 4 ounces of 4-ply wool. They were pre-mordanted with aluminum sulfate at 1 tablespoon per 4 oz. fiber, and cream of tartar at 1 teaspoon per 4 oz. fiber. As I got further along with the exhaust process, I switched to alpaca yarns, pre-mordanted at the same ratios. All the exhaust baths were heated to about 140-160 degrees, kept at that temperature for an hour, then cooled overnight.

Madder: I used 10 ounces of chopped, dried madder root to make the dye bath. Some was from Aurora Silk, some was from my mom’s place in New Hampshire, and some was from my school’s dye and fiber plant garden at Bramble Hill Farm in Amherst, MA. Before the demo, I soaked the roots for 24 hours in about a gallon of water, with a teaspoon of calcium carbonate and a teaspoon of soda ash. The day before the demo I did the first extraction of the roots, heating them up to about 160 degree, maintaining that for about an hour, and then letting them steep overnight. The temperature accidentally got up to 200 degrees for a short time. I extracted the roots a second time at the demo in another gallon of water, then combined the two dye baths.

Weld: I used 8 ounces of weld to make the dye bath. The weld was from the dye plant garden at Bramble Hill Farm. It was dried and chopped up. I didn’t soak it ahead of time, but I did extract the plant material twice during the demo. I didn’t put in any soda ash or chalk at first, so the color didn’t bloom until after I strained out the plant material and adjusted the chemistry. After that, I kept the pH around 8.

Orange Cosmos: I used about 16 oz. frozen orange cosmos from our community garden plot at Amethyst Brook and the Bramble Hill garden. I kept the flowers frozen until right before I put them into the pot of water. After I extracted the flowers, I added soda ash to keep the bath around pH8.

Marigolds: I used 6 ounces of dried marigolds picked at our CSA, Next Barn Over, in Hadley, MA. I don’t know the variety, but they were huge and eye-poppingly bright! I didn’t adjust the pH or use other additives.

Here are four exhaust dye baths on the stove on September 24th, two days after the event. All of these skeins are the 4-ply wool mill ends from Webs that I used at the demo. 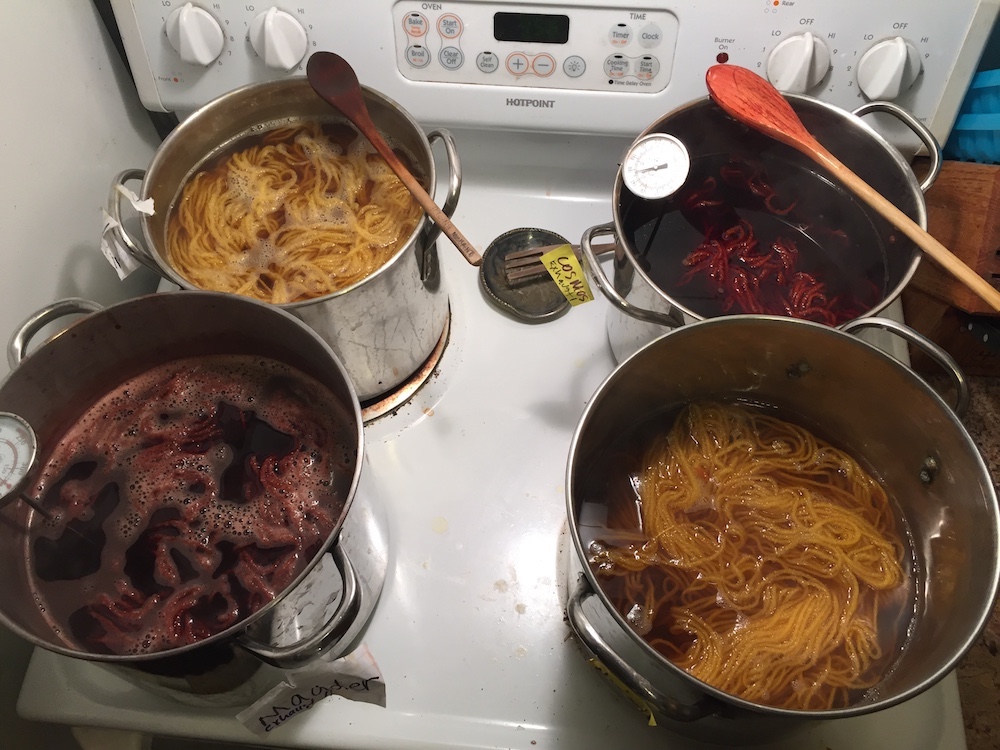 The weld dye bath got stinky within a few days, so I wrapped that one up first. Here are the weld-dyed skeins rinsing in the bathtub:

I have seldom gotten such an orangey-yellow from weld. I used cream of tartar along with the aluminum sulfate when I mordanted these skeins, and I wonder if that made the difference. Otherwise, my treatment was the same as usual, i.e., I bumped up the pH and mineral content with calcium carbonate and soda ash. Here they are hanging on the rack to dry. The skeins are hanging from left to right in the order in which they were dyed: 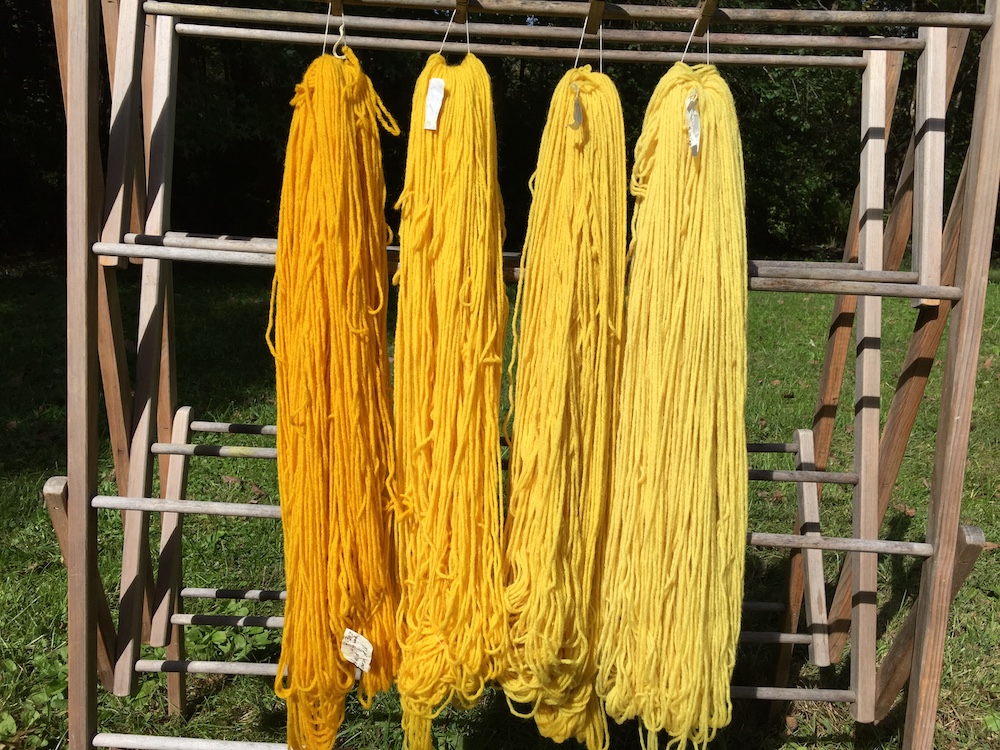 Here they are all dried and twisted neatly. The total weight of all four skeins was 16 oz: 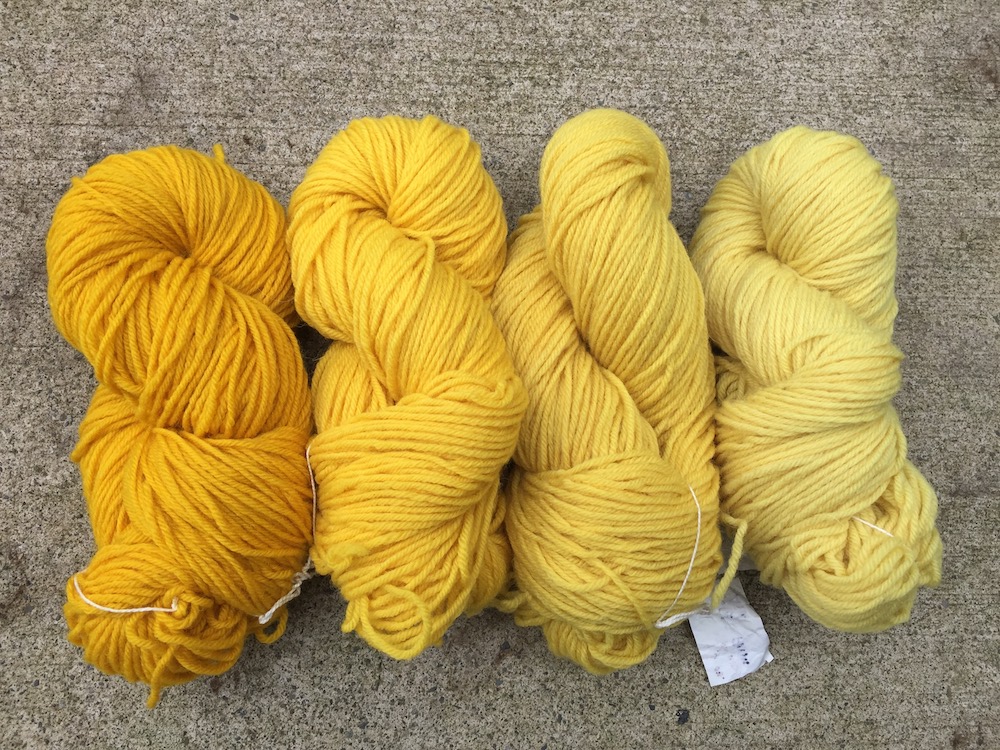 For the orange cosmos baths, I kept the pH up around pH 8-9 by adding soda ash solution, which contributed to the surprising redness. It was also a really strong bath!

Here are all the orange cosmos skeins dripping and drying outside. They are really vivid because they are still wet in this picture. Fiber is always lighter when it dries. 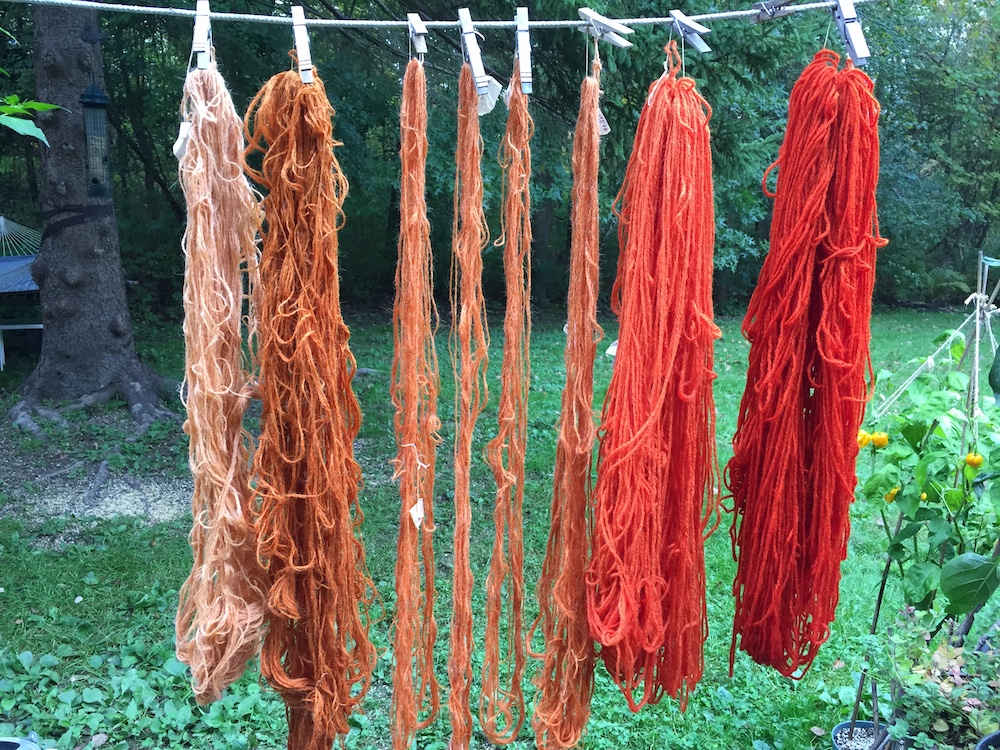 I always do a delayed rinse on my fiber, which means that after I pull a skein out of the dye bath, I wait until it’s dry to wash and rinse it. The two on the right, above, are wool. The one on the far right went into the strongest dye bath. The one second from the right was the first exhaust bath. The thinner skeins from the middle to left hand side are alpaca fiber. In this photo, I hung the skeins slightly out of order. The larger, more orangey skein second from the left was the third in the sequence, and the teensy ones in the middle were, in fact, in the fourth bath. The pale pinkish one on the far left was last.

Orange cosmos is not the most lightfast dye plant, but it’s bright and easy to grow and looks extremely cheerful in the garden. And I love orange. Here’s how the skeins looked once they were dry, in front of an autumnal maple. This time they are hanging from left to right, strongest bath to weakest. The woolen skeins together weigh 8 oz. The alpaca skeins together weigh 12 oz: 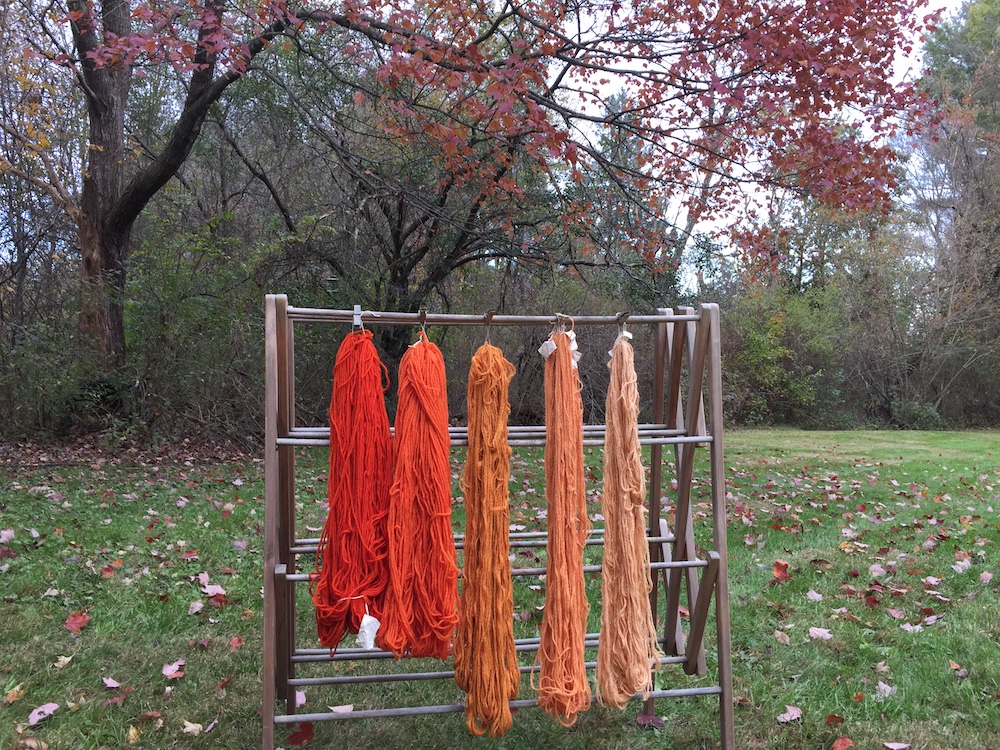 Here are the madder skeins this afternoon under the same maple tree: 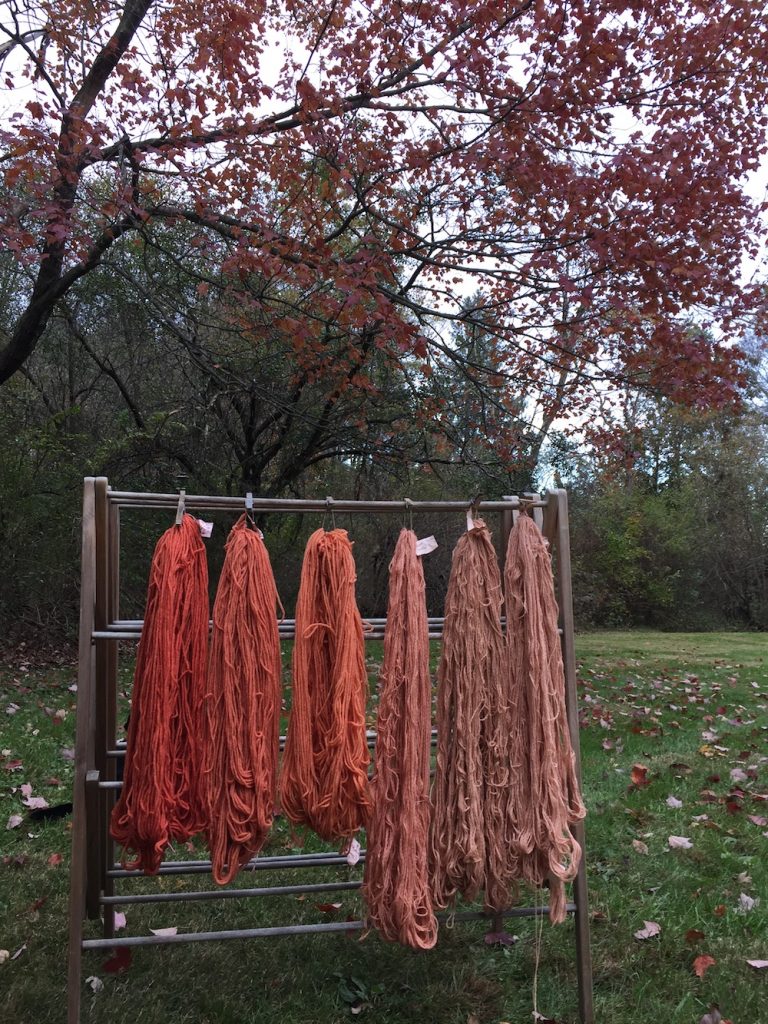 Here are the marigold skeins rinsed and dried on October 20th: 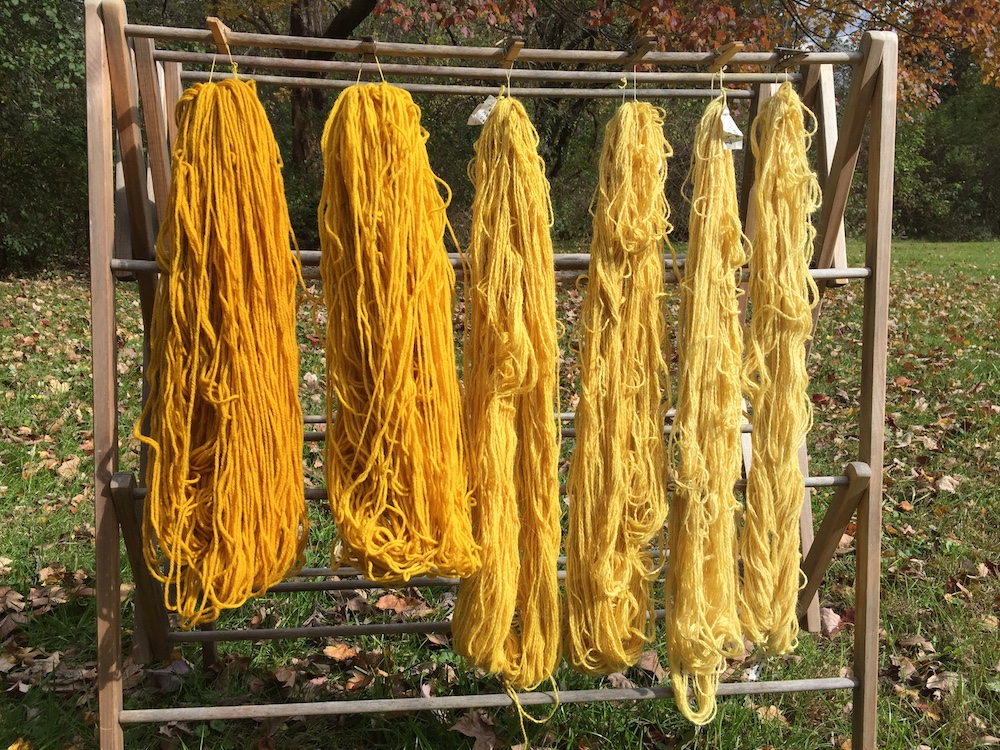 Here are the madder, cosmos, and marigolds skeins hanging all together on October 20th. I liked the way the skeins echoed the color in the trees, so I didn’t include the weld skeins. 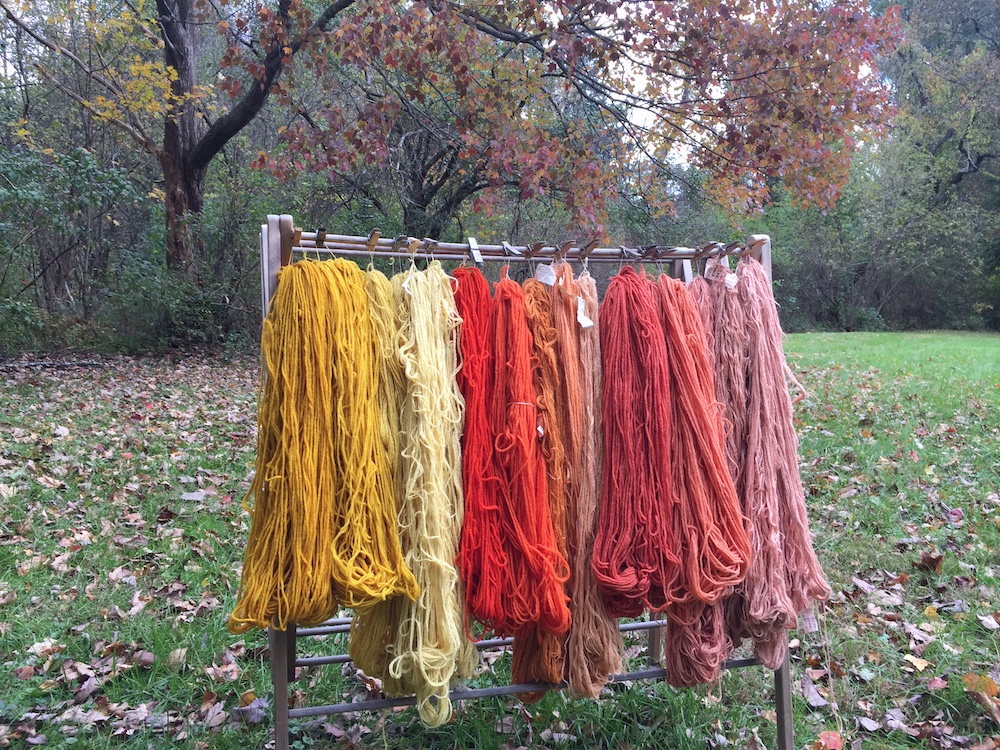