Yesterday I ran a woad vat! This is worthy of an exclamation point because all day yesterday, I was sure that it was the latest date I had ever run a woad vat.

Normally by this time of year, all the dye plants have been killed by frost and the gardening season is over.

As I started writing this post, I decided to consult my records regarding late-season woad vats. It turns out I was wrong about the latest date of my woad vats in years past. Here’s the proof: 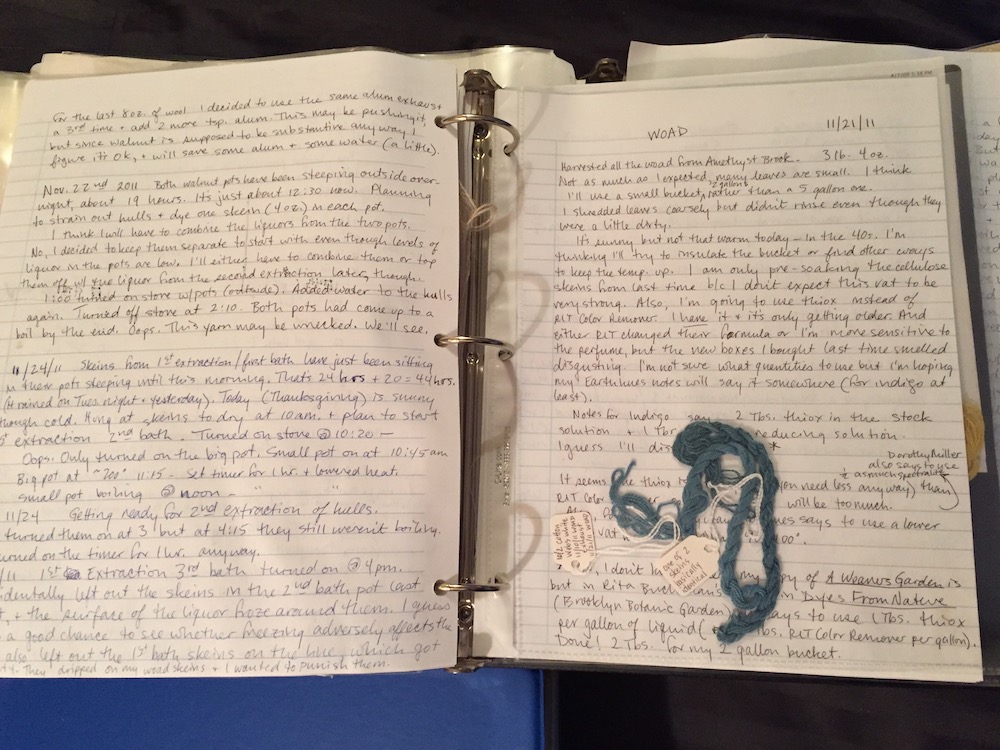 Luckily, I write things down and do not have to depend on my bad memory. It was actually kind of amazing looking through all my dye notebooks to find the “Latest Woad Vat” date. I’ve been dyeing since 2000, and have filled up a lot of notebooks. 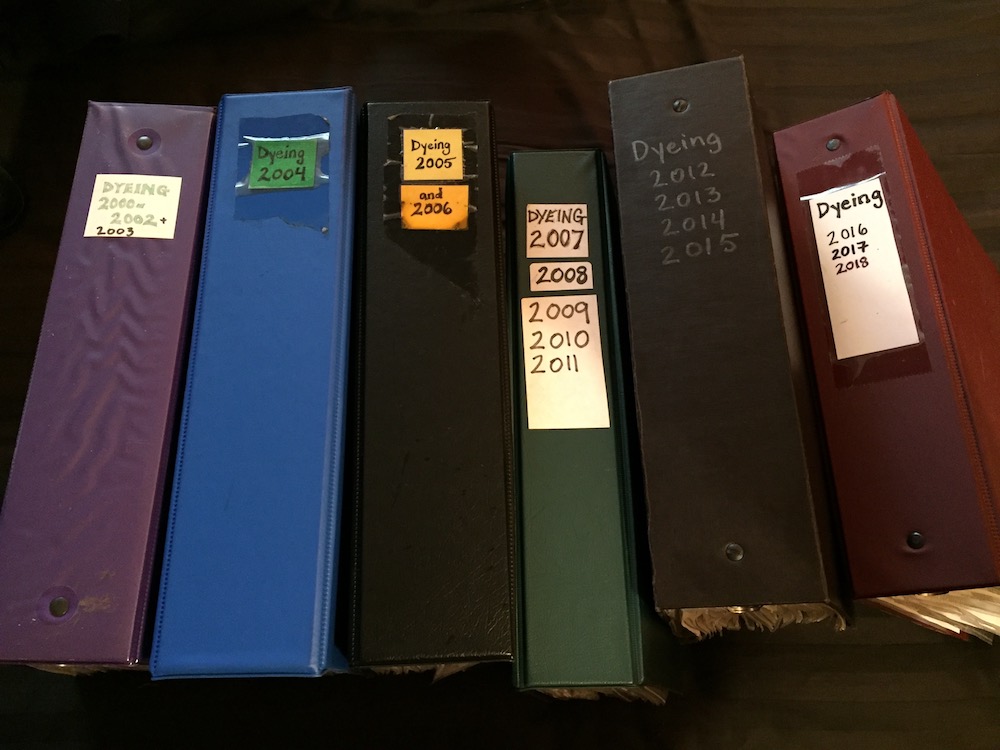 Here’s the story about yesterday’s vat. Back in mid-October, we had a warning for a hard frost. Light frost won’t hurt woad, but I wanted to protect it from a heavier frost until I had a chance to harvest and use it. I had planted it really late this year, and it wasn’t even ready to pick until mid-September. I hadn’t had time to use it by the middle of October, but a year without a woad vat is a sad thing, so I covered it up and hoped for the best.

Then we had rain and more rain and many more frosty nights, and my schedule didn’t get less busy. On Friday Nov. 16th, we got 8 inches of snow. I figured the fall was over, and I should just go take off the row covers and admit defeat.

Yesterday I had the day off school, and finally had time to visit the dye plant garden and take off the row covers. To my total surprise, all the snow on that side of the hill had melted. Even more surprising, the woad looked perfectly fine.

Not at all dead. Totally alive. A little bit flat, but very green. 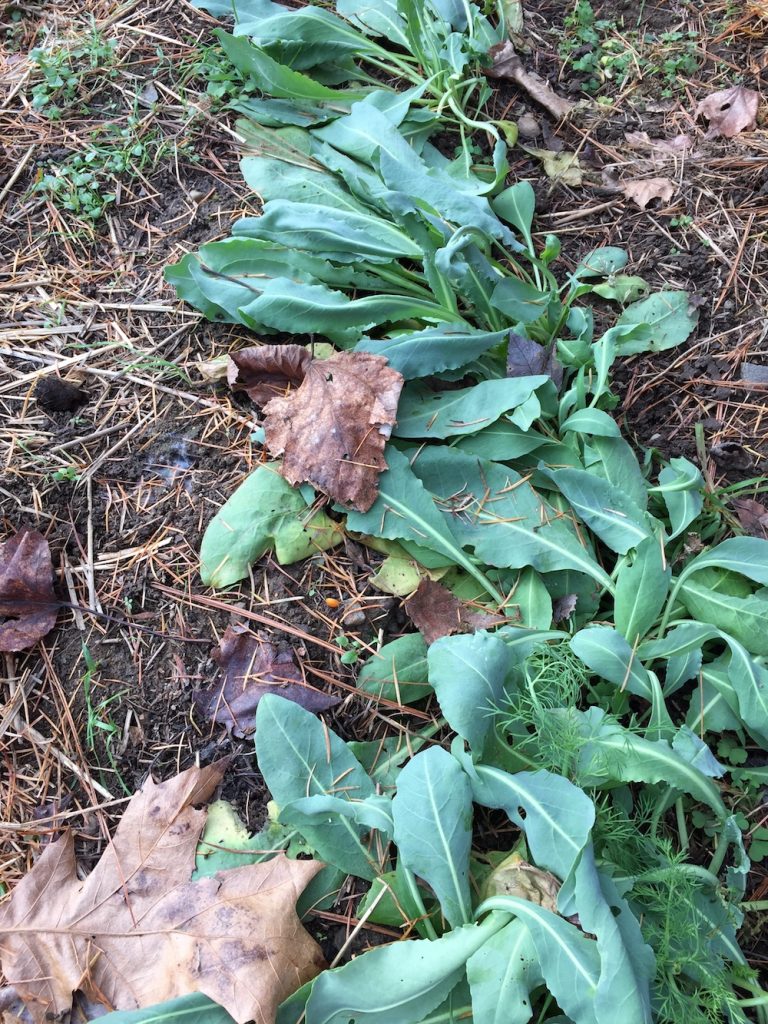 Here was the view in the other direction: 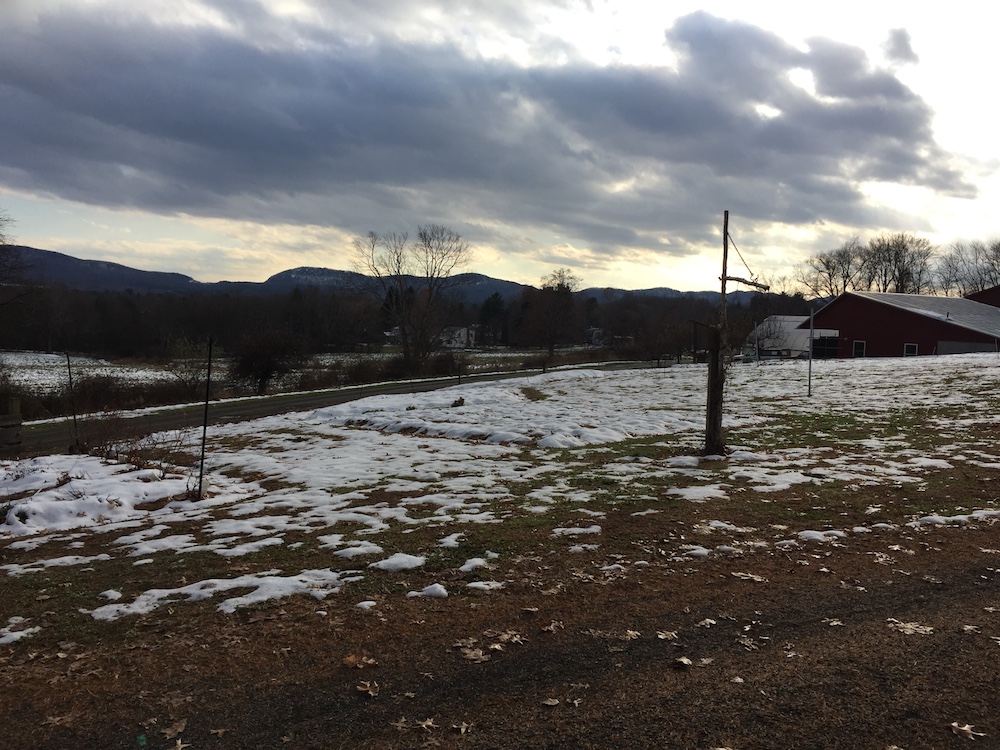 I decided to harvest it and run the vat that afternoon. The weather when I started out was cloudy and about 35 degrees. Over the afternoon the temperature was going to drop, and the low last night was forecasted to be in the single digits, close to zero. Today’s high has not exceeded 18 degrees (I’m writing around 3:30 pm). No time like the relatively-less-frigid present.

Here’s a bed after I harvested all the leaves: 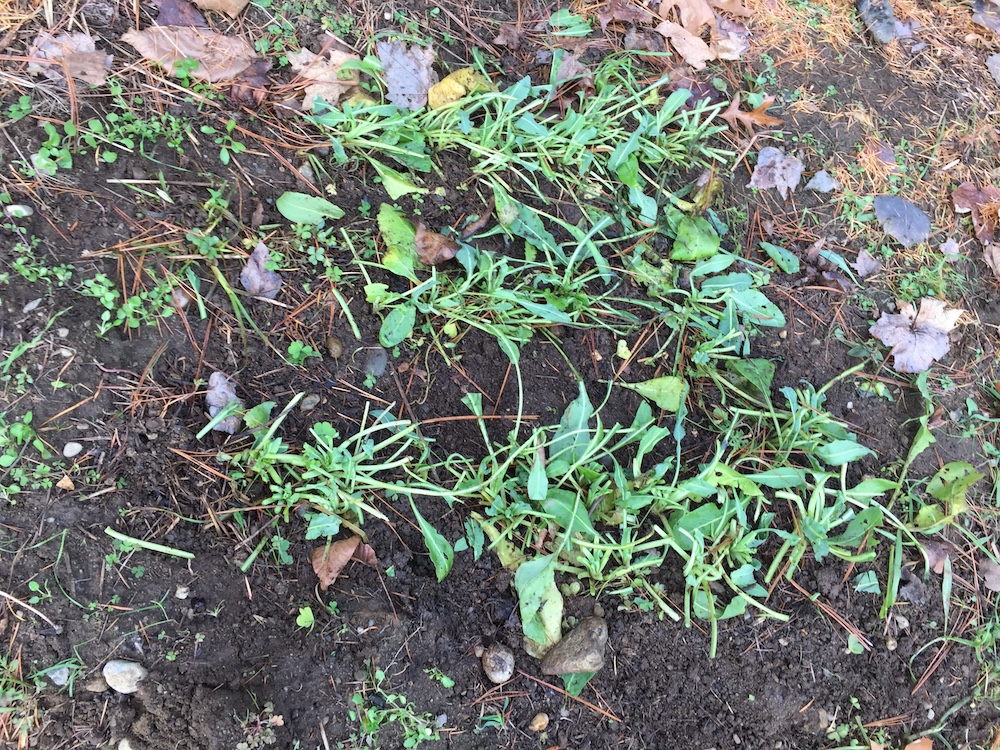 Here’s the bag in which I collected the leaves: 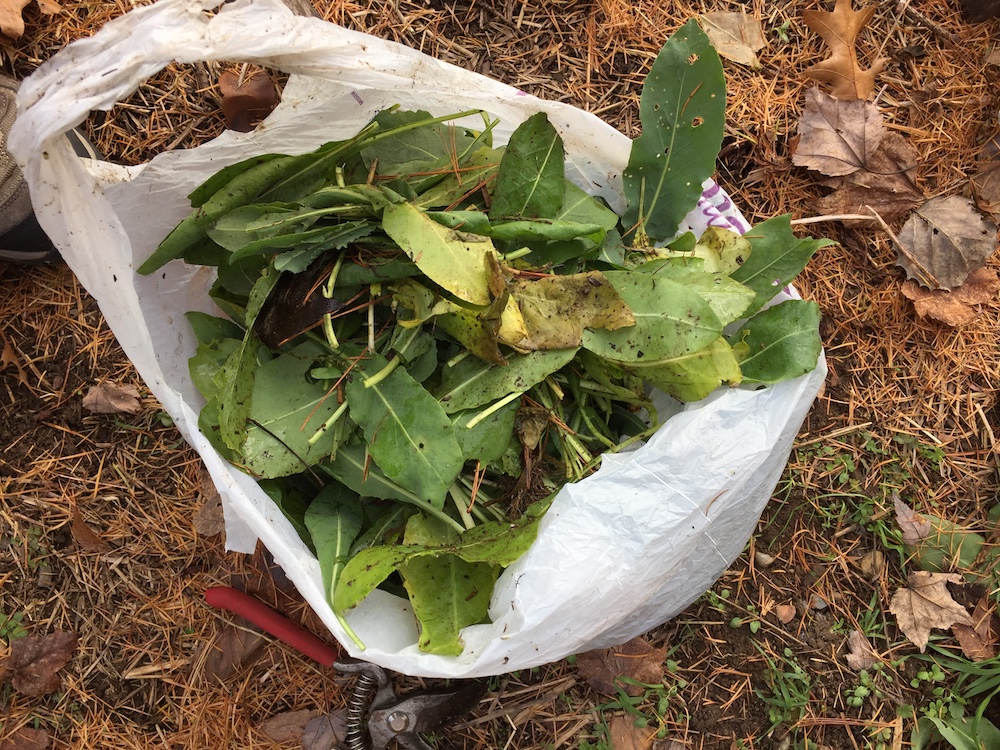 I harvested a little over 3 pounds of woad leaves. They were muddy and mixed with a lot of pine needles and dried tree hardwood leaves, so I rinsed them in warm water: 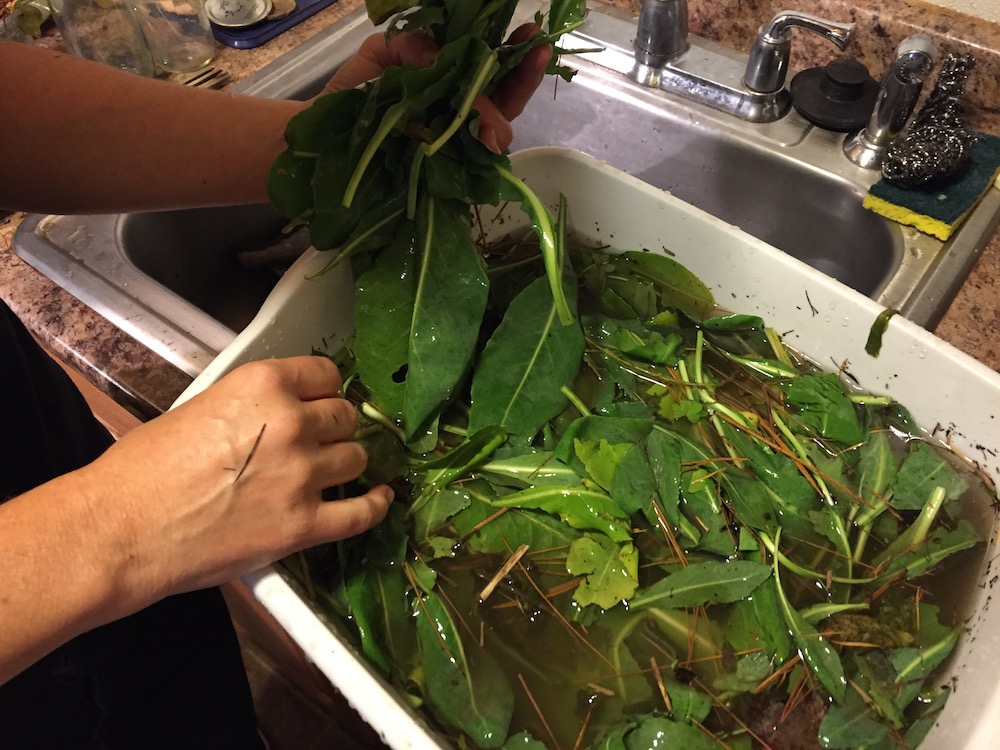 I tried to separate out as many pine needles and leaves as possible. Here was the muddy rinse water afterwards: 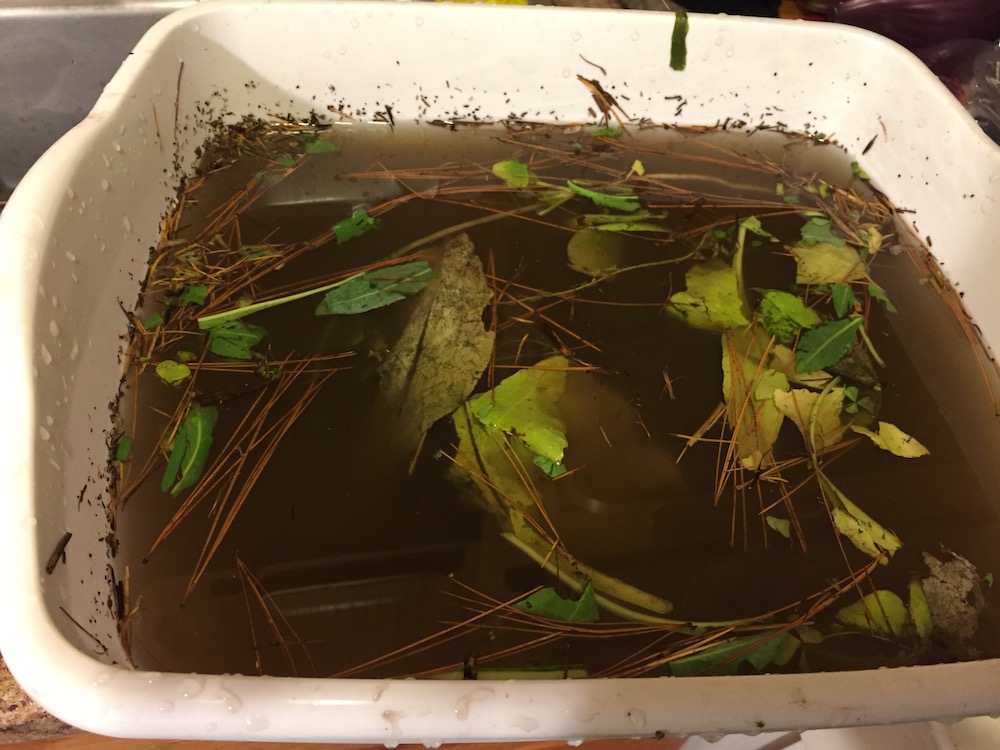 Normally I shred the woad leaves but I was racing to get as much done before dark as possible, so I left the leaves intact: 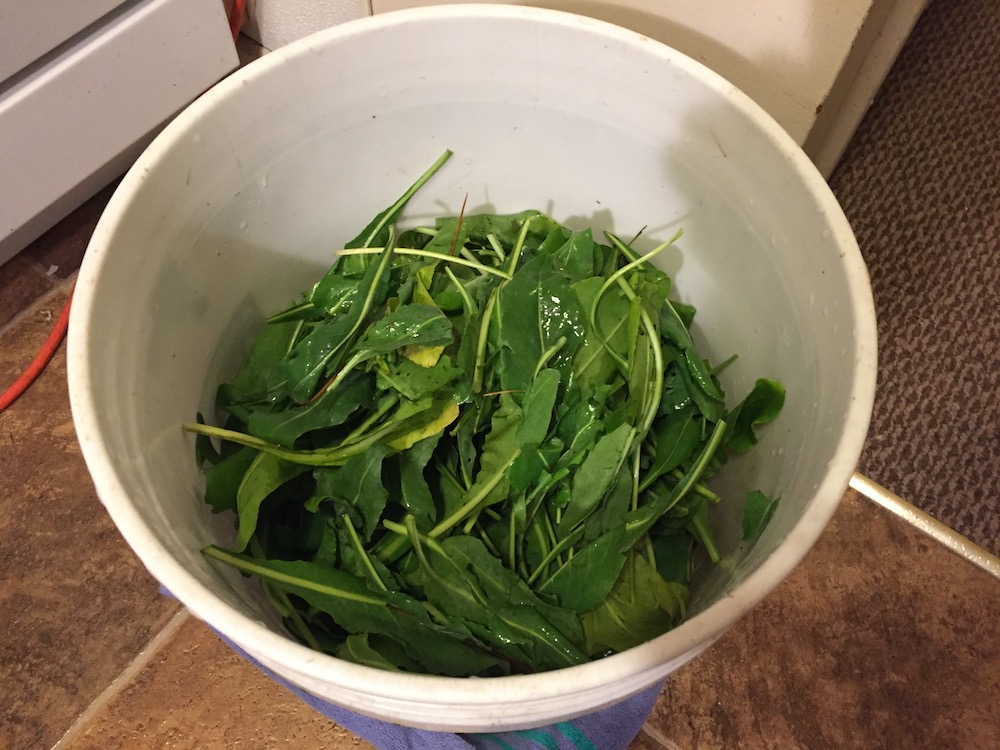 I poured boiling water to the top of the bucket and pressed on the lid. To keep the vat hot, I did this step in the kitchen. The leaves extracted for one hour.

Then, I took the operation outdoors, where it was getting really cold and windy.

Here was the scene outdoors in our parking lot: 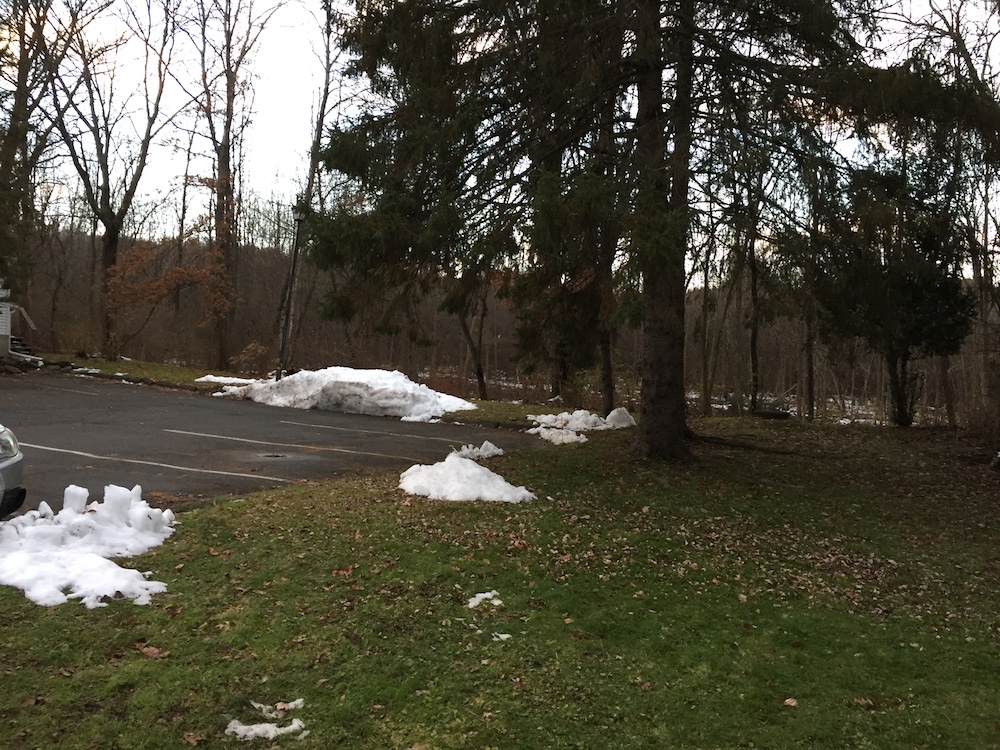 We have had a lot of rain and other precipitation over the recent weeks and months, so the ground is totally saturated. I set out milk crates along the front walk to keep things out of the mud.

I strained out the leaves and squeezed out as much liquid as possible. There was a little blue staining on the lid where the leaves had been pressed at the top of the 5 gallon bucket, which I took to be a good sign:

I added ammonia until the pH was between 9 and 10, then I aerated the vat by pouring it back and forth between two 5-gallon buckets:

The foam on top lightened to a creamy color after a while, so I figured that was sufficient. I sprinkled on one and a half packages of RIT Color Remover (which contains the reducing agent sodium hydrosulfite) and stirred it in to help it dissolve:

I let the vat reduce for 45 minutes. By this time it was dark out and really, really cold. I couldn’t take pictures in the dark. I overdyed some yellow skeins (alpaca and wool dyed with weld and marigold), a woad-dyed cotton t-shirt of Matthew’s, and some woolen woad-blue skeins from 2016.

Did I say it was getting cold? When I set the skeins out on milk crates to oxidize, they froze. When I put Matthew’s t-shirt out on the milk crates, it froze: 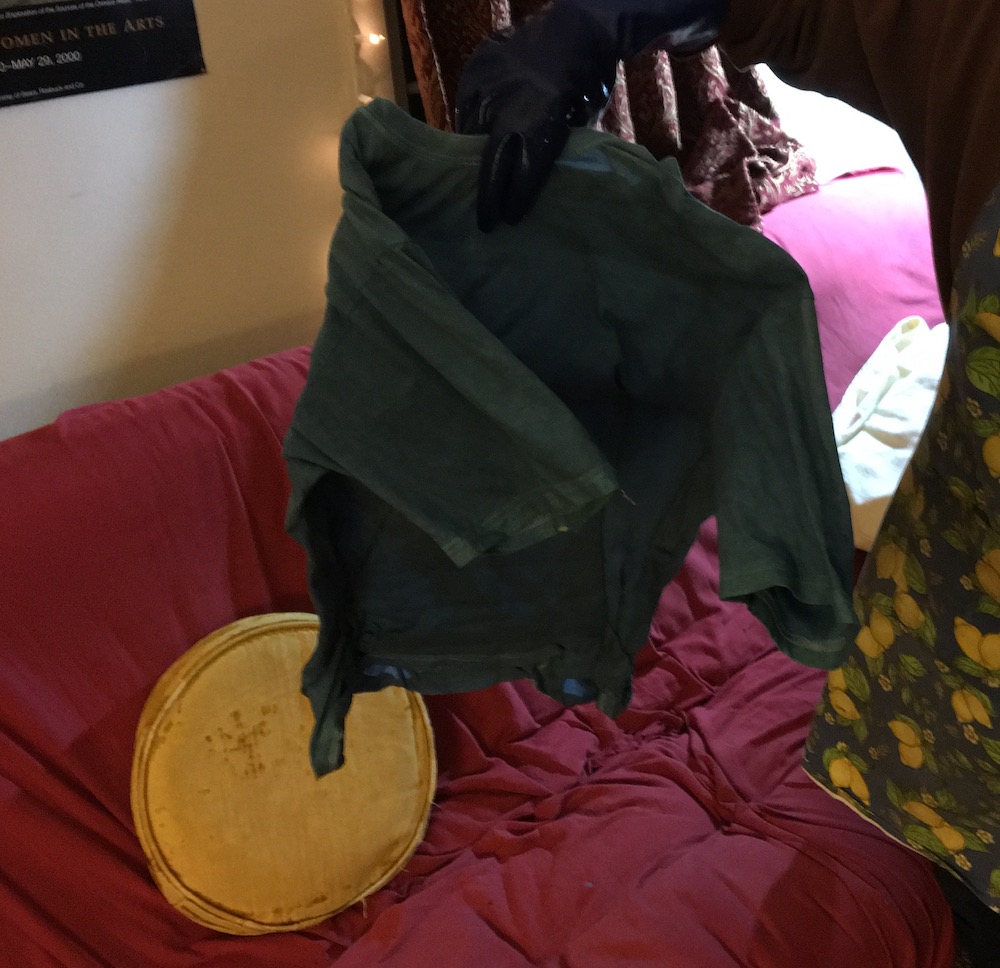 Here are the skeins oxidizing in the bathtub this afternoon: 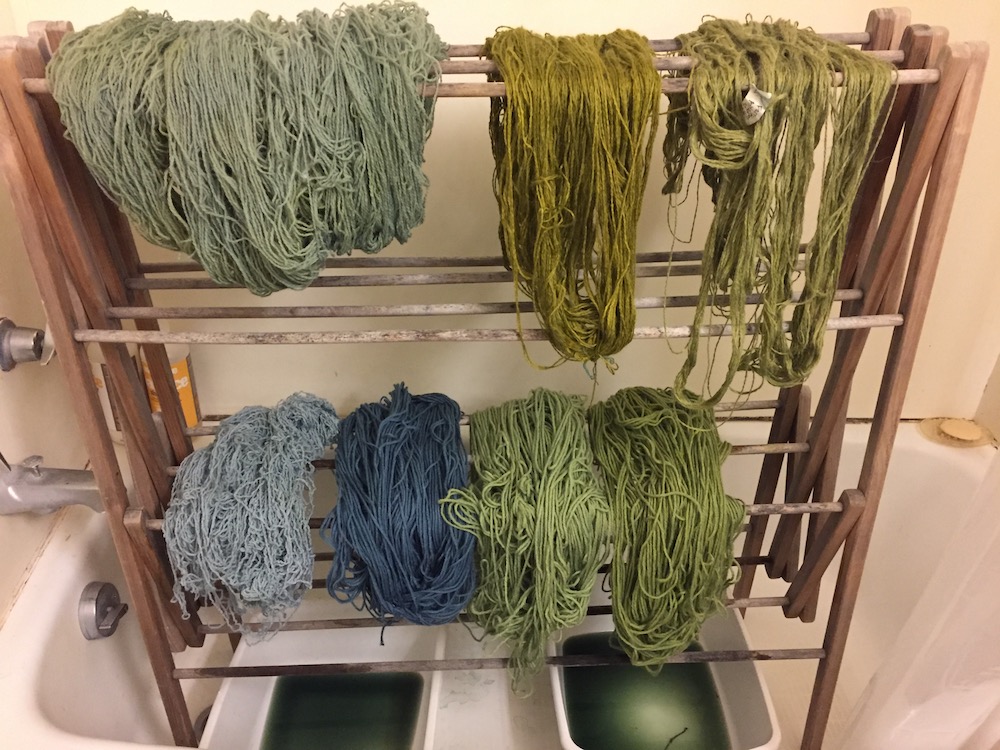 The greens were in the vat for 10 minutes each. I left the darkest blue skein in overnight. I haven’t washed or rinsed them yet.

Around 8 pm I moved the vat into the downstairs bathroom to keep it from freezing: 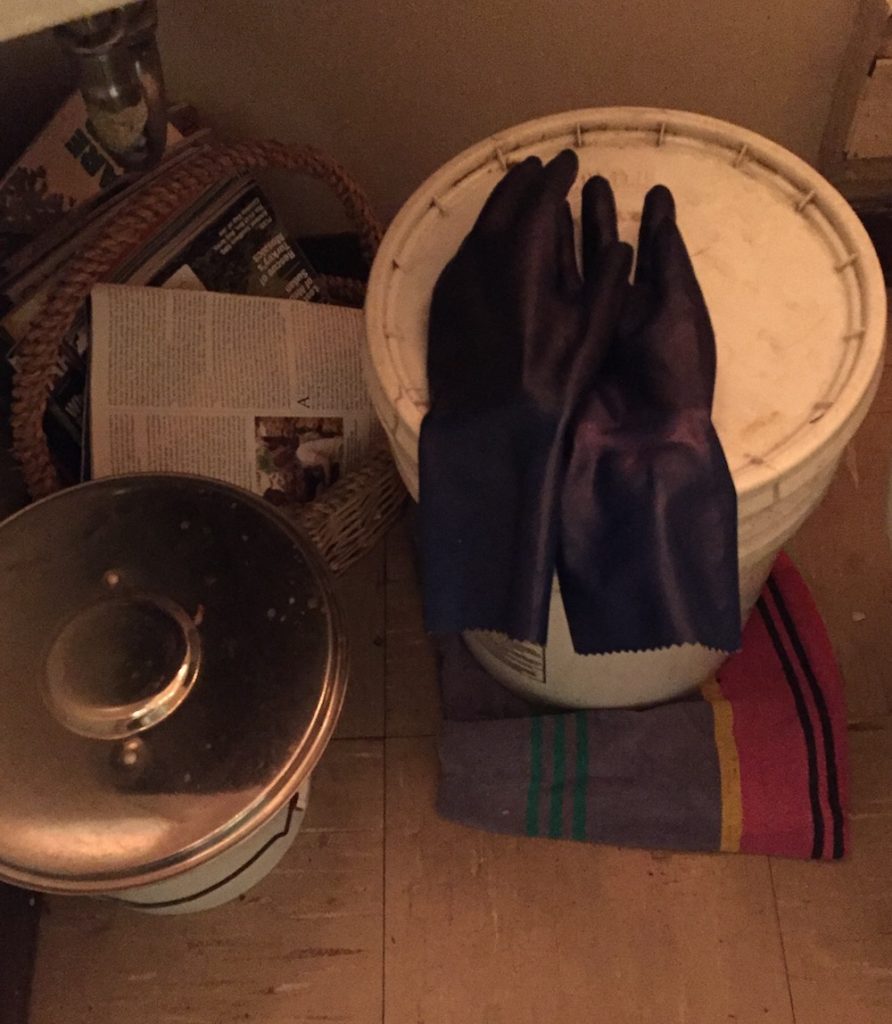