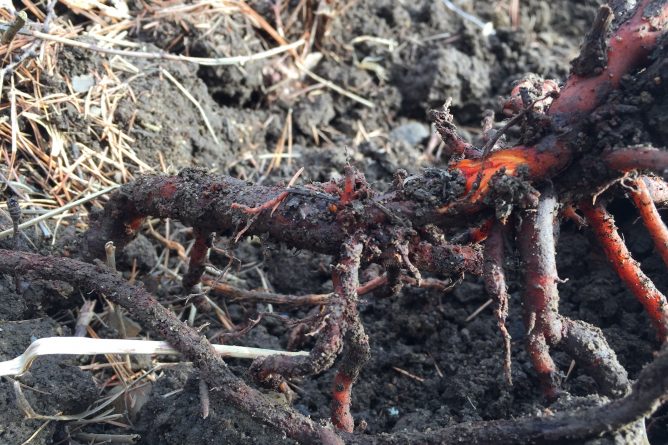 On Saturday March 30th and Sunday March 31st I dug up a good portion of my madder bed. I already posted about the other garden clean-up I did that Saturday. This post is about digging up the madder roots, specifically, so I’m telling the story a slightly different way.

You are supposed to harvest madder roots when the above-ground parts of the plant are dormant. I always think that I will dig roots in the fall once the tops have died back. My notion is that after a season of growth, the roots will be fat and juicy and full of color. For some reason, that fall harvest time seldom happens.

More often, I dig up roots in the spring when I’m trying to curtail the spread of the madder into the pathways and adjacent beds in the dye plant garden. That’s really more like “weeding” than harvesting. I worry sometimes that after a cold winter of storing up nutrients to help the plants survive, there’s not a lot of oomph left in the roots to yield good dye. Nevertheless, given my work constraints and other factors, that has been my typical pattern.

Even with these annual curtailment efforts, the madder has gradually taken over more and more of the garden.

This spring, though, I have aspirations of planting a lot of Japanese indigo and woad, so I wanted to open up some space for additional beds. The weather smiled upon me on Saturday March 30th. The forecast had called for afternoon rain, but at 3 pm it was still gorgeous, 60 degrees, and not in the least rainy. The snow had all melted, the ground had thawed, so I seized the opportunity.

Here’s the “before” photo of the madder bed. Nothing to see here. 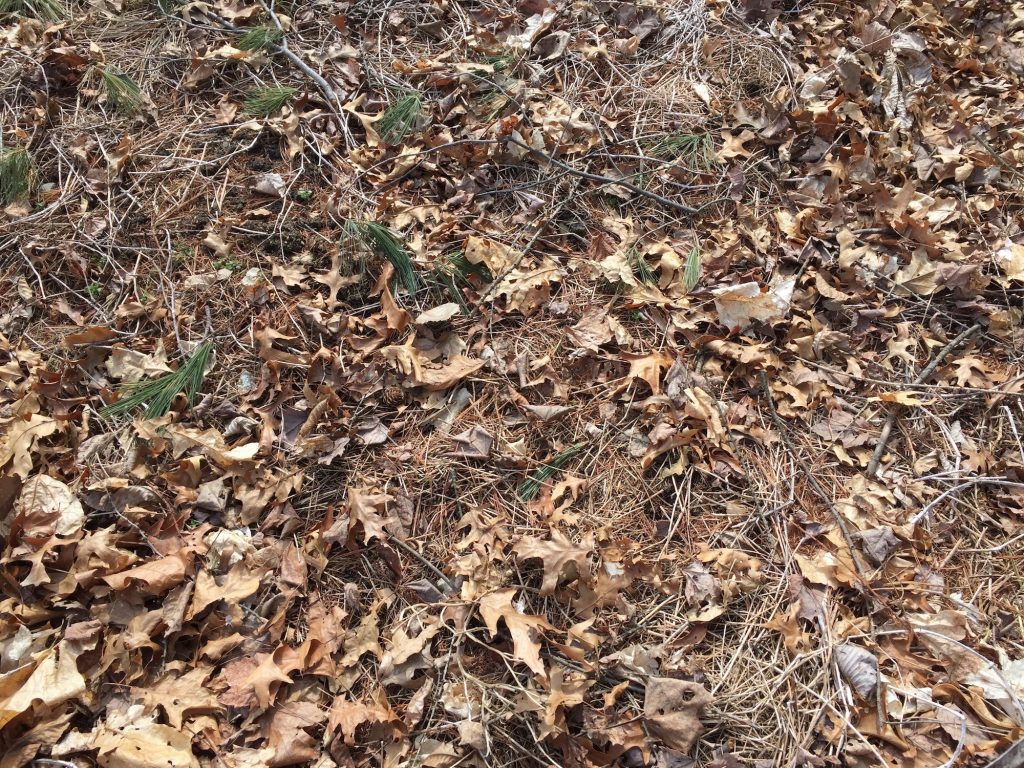 With the very first pitch-fork-full of soil, I struck roots. Well, OK, technically the tool I prefer is a hay fork, but it’s pointy and slightly curved and perfect for digging. 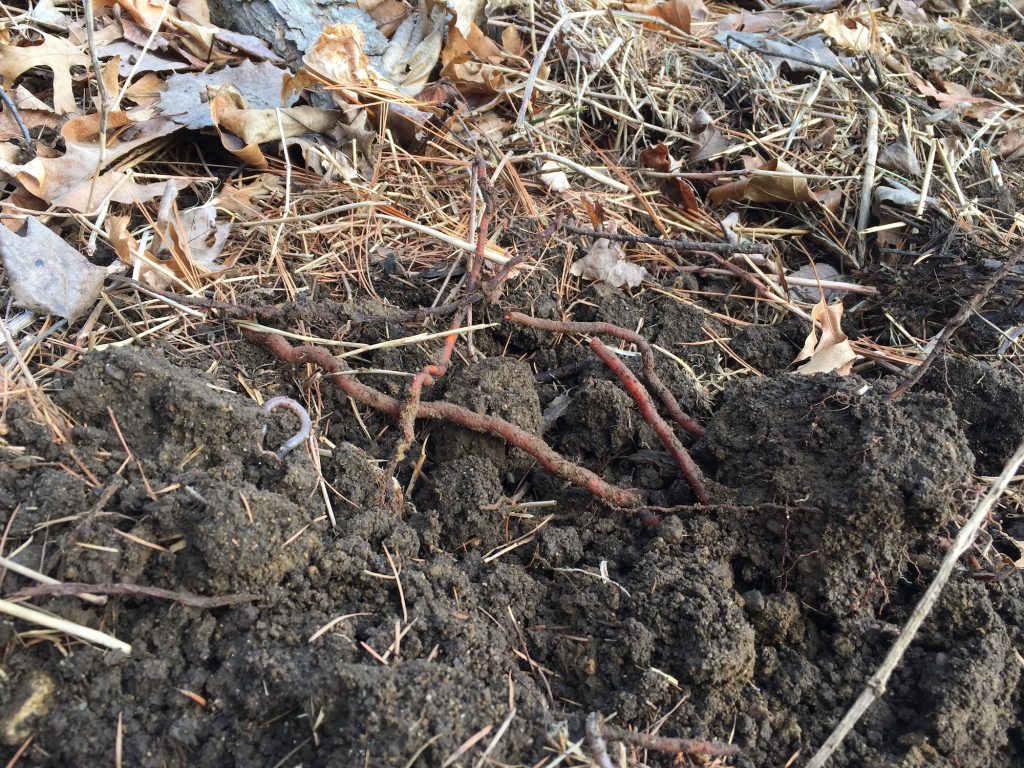 The thin pinkish-purplish squiggle in the photo above is a worm. The slightly thicker orange-red squiggles are madder roots. Below is a particularly impressive knot of roots demonstrating its power and sentience: 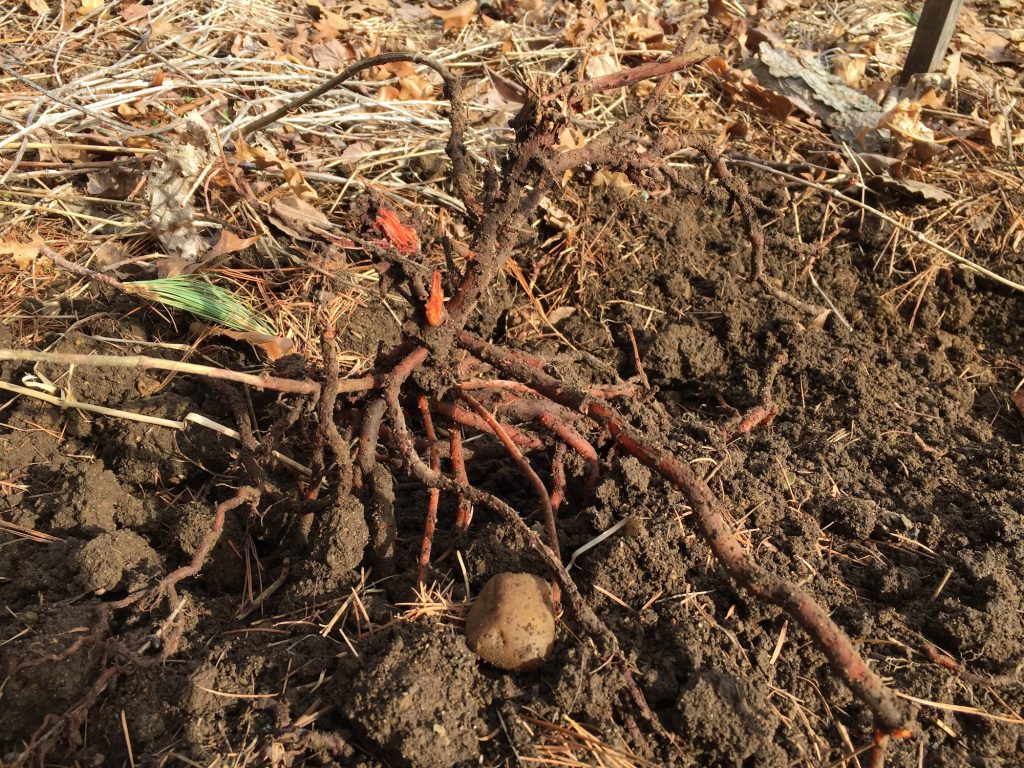 I was excited to find such a big knot because (brief detour from the narrative)….

This madder bed has been in place for about ten years. Most of the sources I’ve read agree that madder roots are ready to harvest after three years. I have harvested from this bed several times since its initial three-year growth period, but I’ve often been dismayed at the thickness of the roots. They are nowhere near as thick as the commercial roots I’ve bought from places like Aurora Silks or Tierra Wools. They are, in fact, thin.

I have given this matter (a madder matter) quite a bit of thought. First, I suspect that three years of growth here in Western MA is not the same as three years of growth in a warmer climate with shorter winters. In my garden, the plants are dormant for much of the year. They aren’t early to rise in the spring, and they are the first plants to die back in the late summer. Presuming that above-ground photosynthesis is necessary for below-ground root growth, my roots don’t have a lot of growing time. Comparing three-year-old madder roots from a longer-season climate with three-year-old roots around here might be like comparing human years and dog years.

Second, I do not have any way to determine or control the age of the roots I dig. Madder is a bedstraw. The plants send out new runners and put down new roots all the time. Old roots bust out with new shoots. Even in one area of the bed, old and new roots must get jumbled together. It’s likely that a lot of the roots I’m digging up aren’t actually three years old, even though the bed is much older than that.

Third, I have been woefully negligent about testing the soil or adding amendments to the madder bed. The roots would probably grow thicker with additional compost or manure.

OK, back to the narrative. I was thrilled to find thick roots. Finally! Here is a close up of that exciting knot: 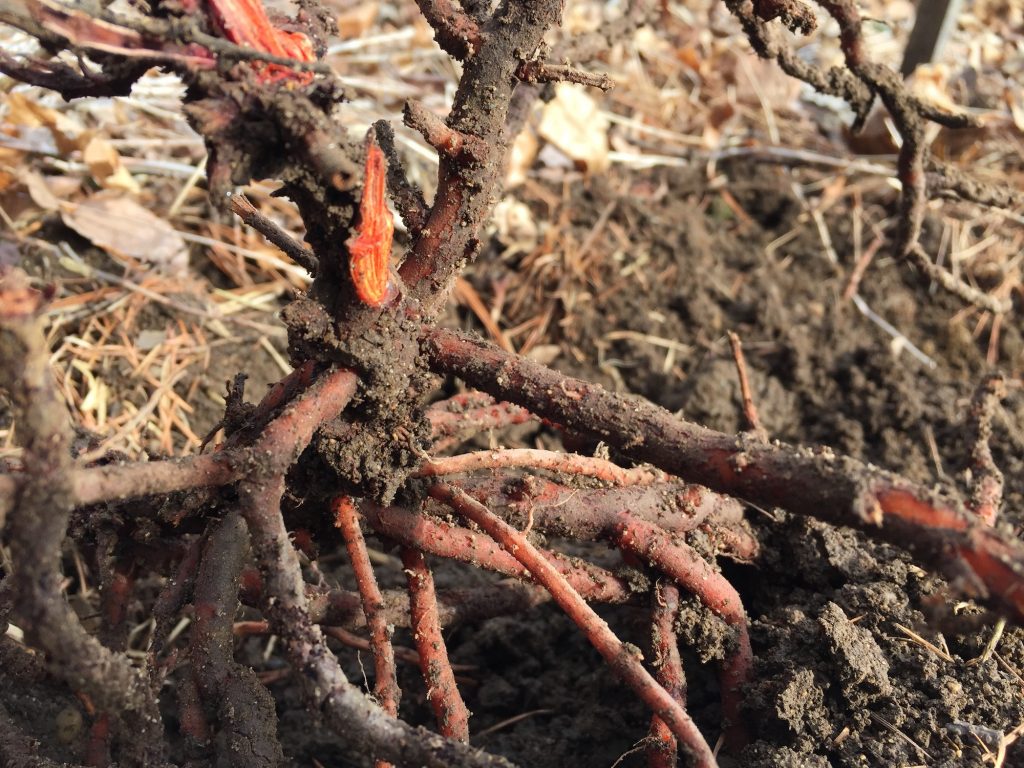 Madder is exciting, in part, because the roots are like veins of lava. They look all earthy and rock-like, but inside there is fire! 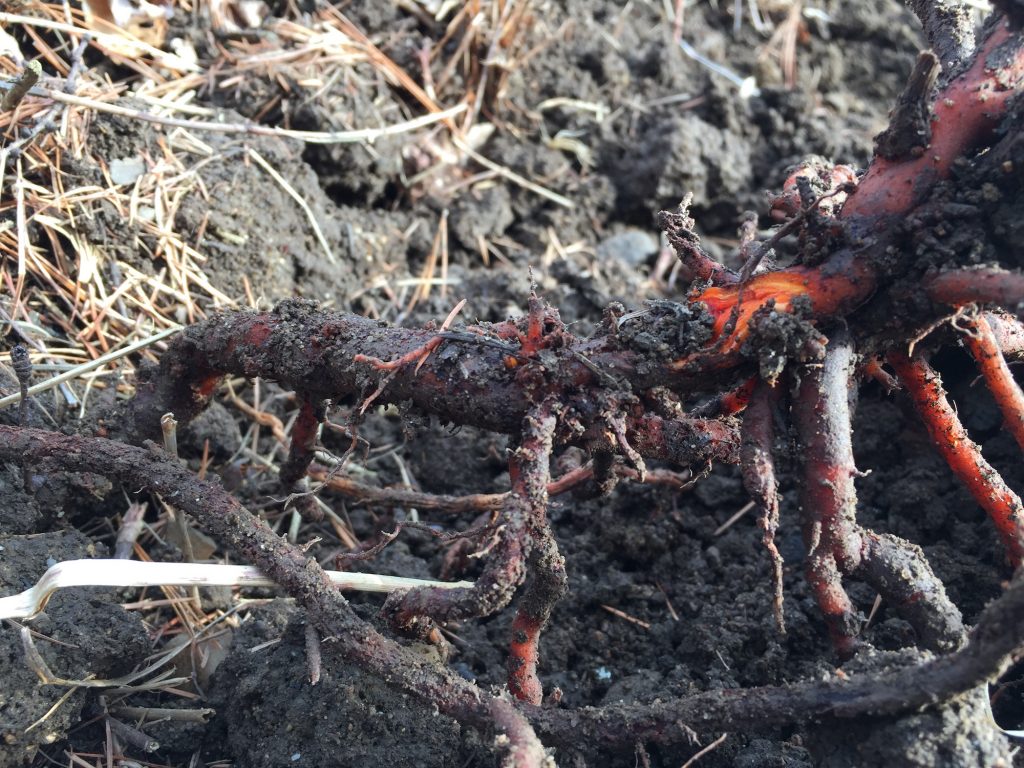 On Saturday I dug up the west and south sides of the bed. In the foreground are the four trays that I filled that afternoon: 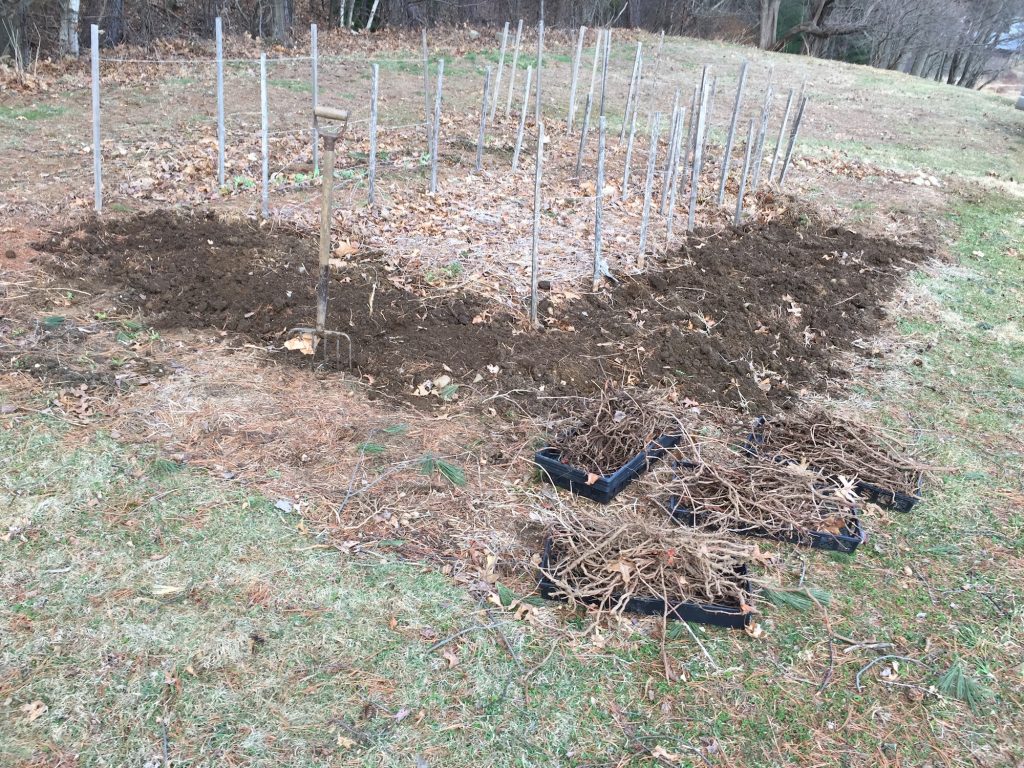 I brought home those four trays to weigh, rinse, and set up to dry. Here is an unwashed tray of roots. Sentient, right? 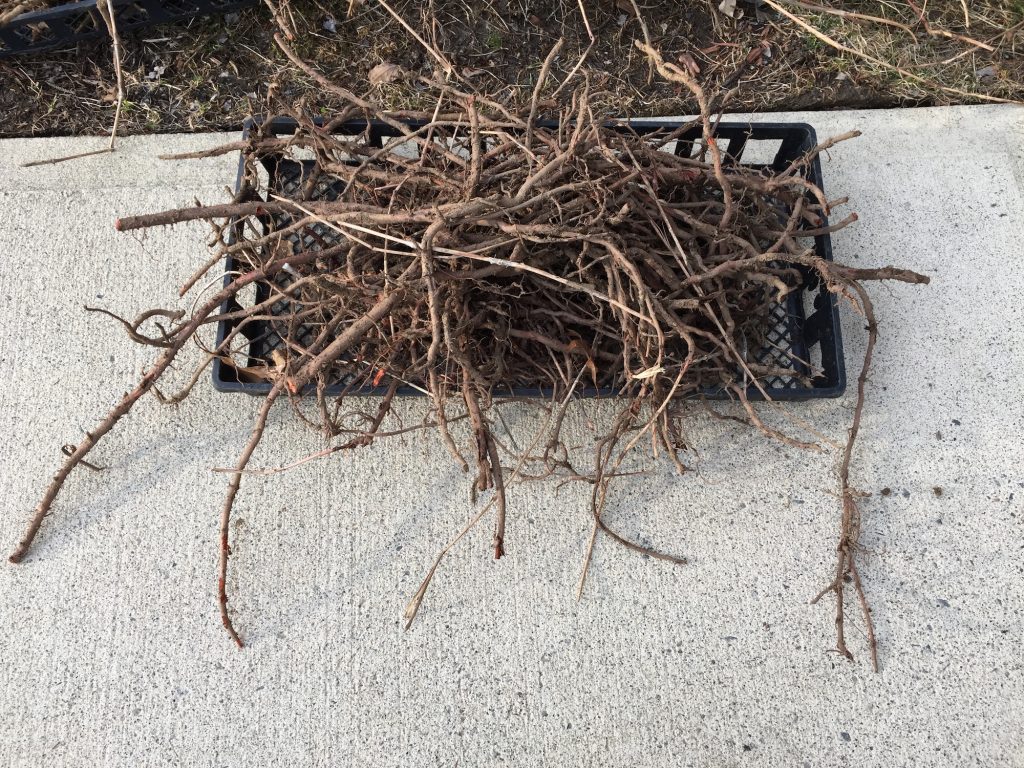 Here I am scrubbing the roots in a 5-gallon bucket of water to remove as much soil as possible:

Here are some of the wet roots in the bucket: 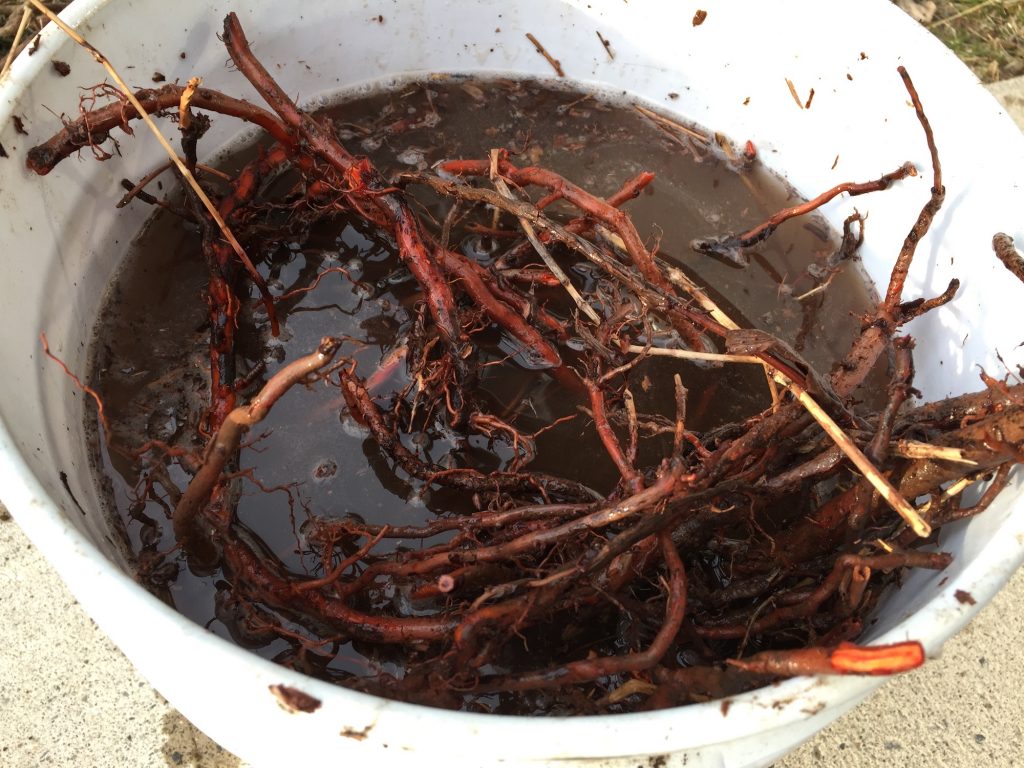 Here is the Saturday harvest all rinsed and set up to dry: 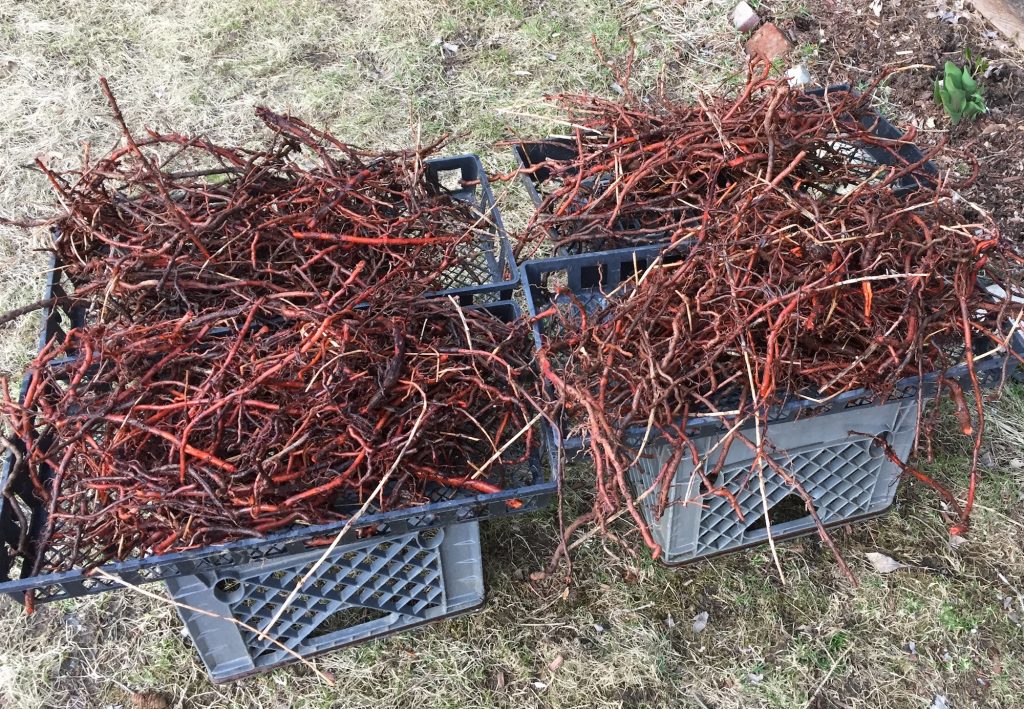 And here is the bucket of muddy water. I am not sure whether the pink tinge comes just from the soil or from the color that rinses off the roots:

On Sunday I went back again to do more digging, but this time I was racing the rain. The forecast called for rain starting at 11 am, and this time they were right. 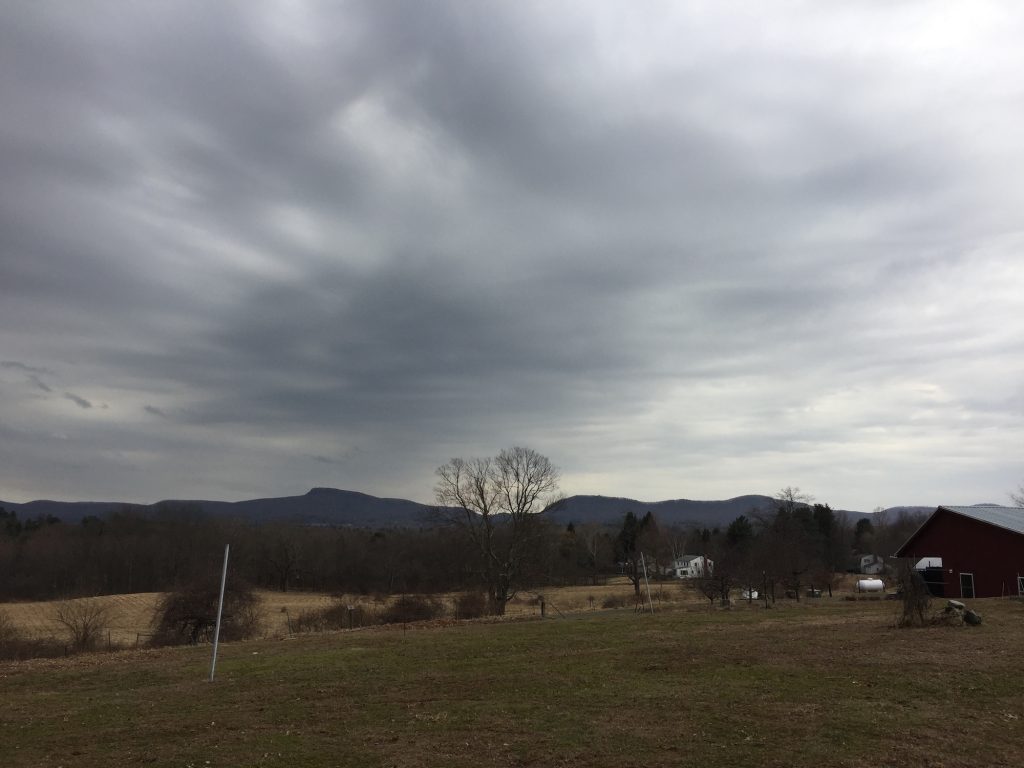 In the morning on Sunday, I dug up the east and north sides of the bed. Here’s the “after” photo: 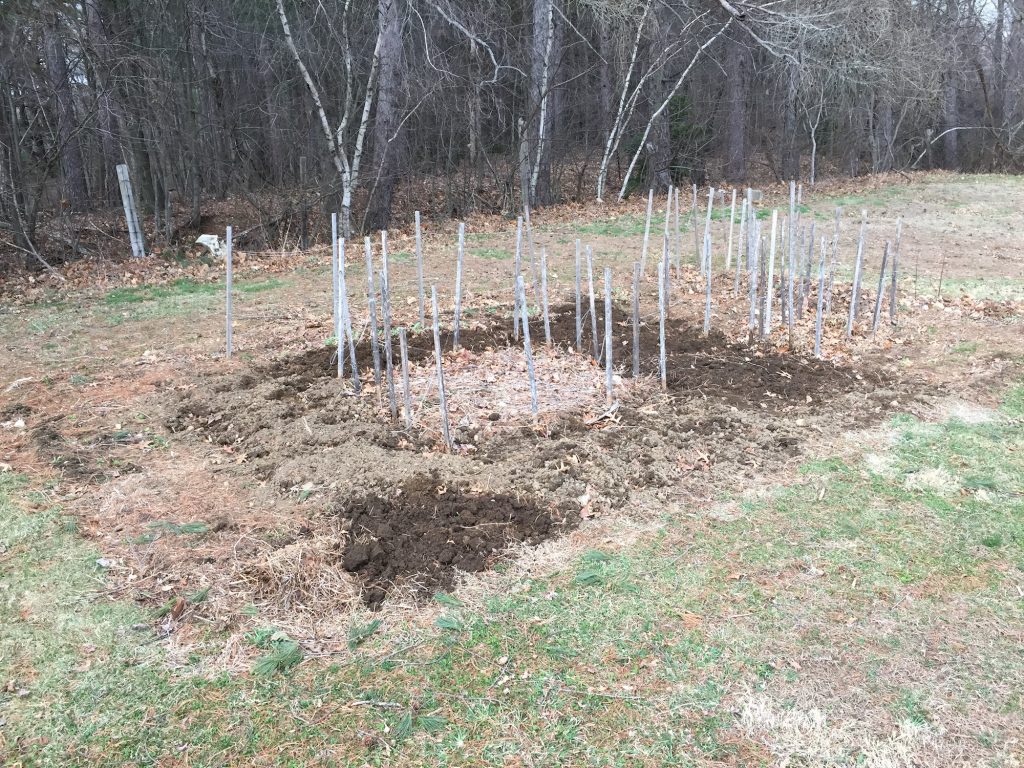 I didn’t take the time to photograph the rinsing process that morning, because at exactly 11am the rain began.