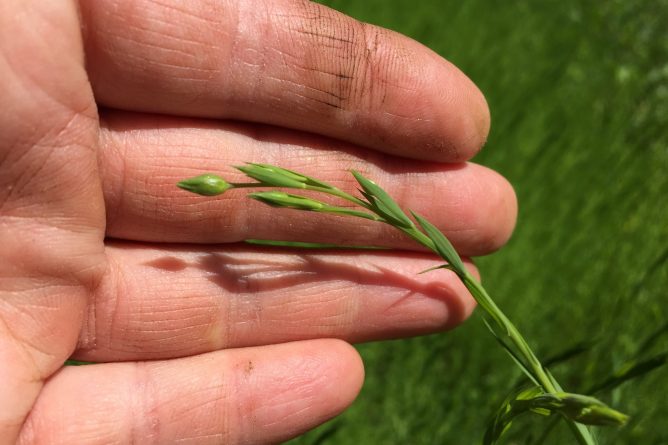 Despite the most perfect spring weather I can imagine, my flax isn’t thriving. I am pretty sure the problem is that I planted too densely.

It’s been very rainy and relatively cool this spring. Not great for certain crops, I’m sure, but it ought to be great for flax.

However, the density of the plants has created so much competition that they are not growing at all in the center of the bed. Meanwhile, the tall plants around the edges are getting ready to flower, right on schedule.

Here’s what’s been going on since I last wrote. On May 31st the difference between the edges and the center of the plot was really obvious. The plants along the edge are darker and taller: 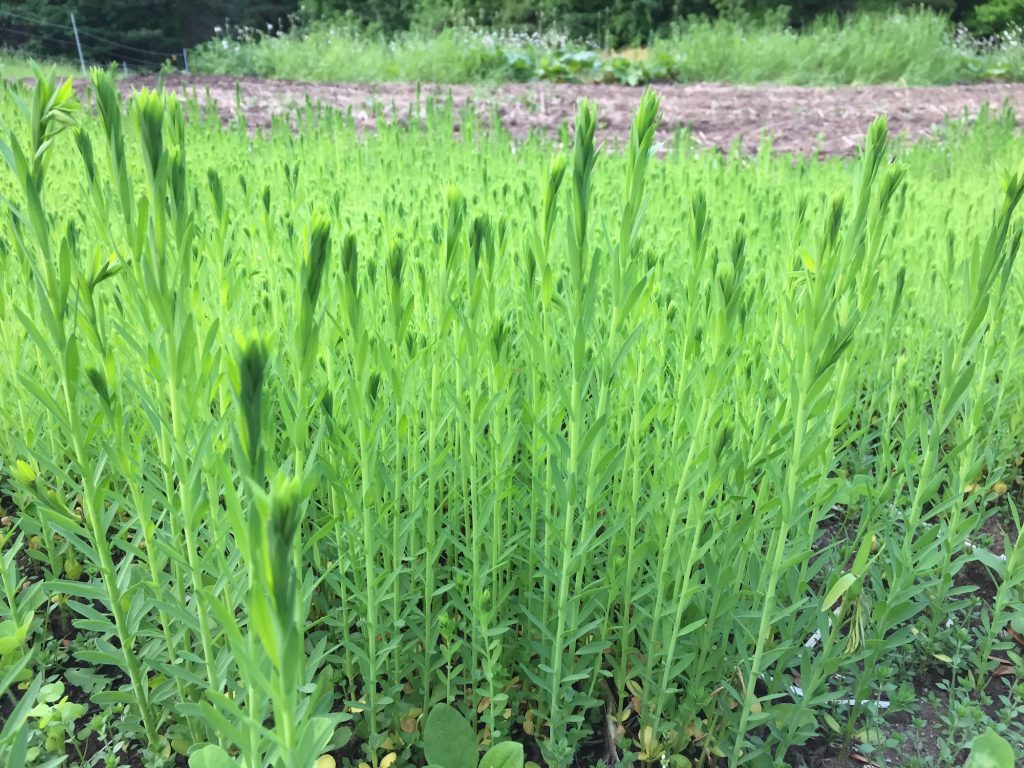 In contrast, the plants in the center are shorter and brighter/lighter colored: 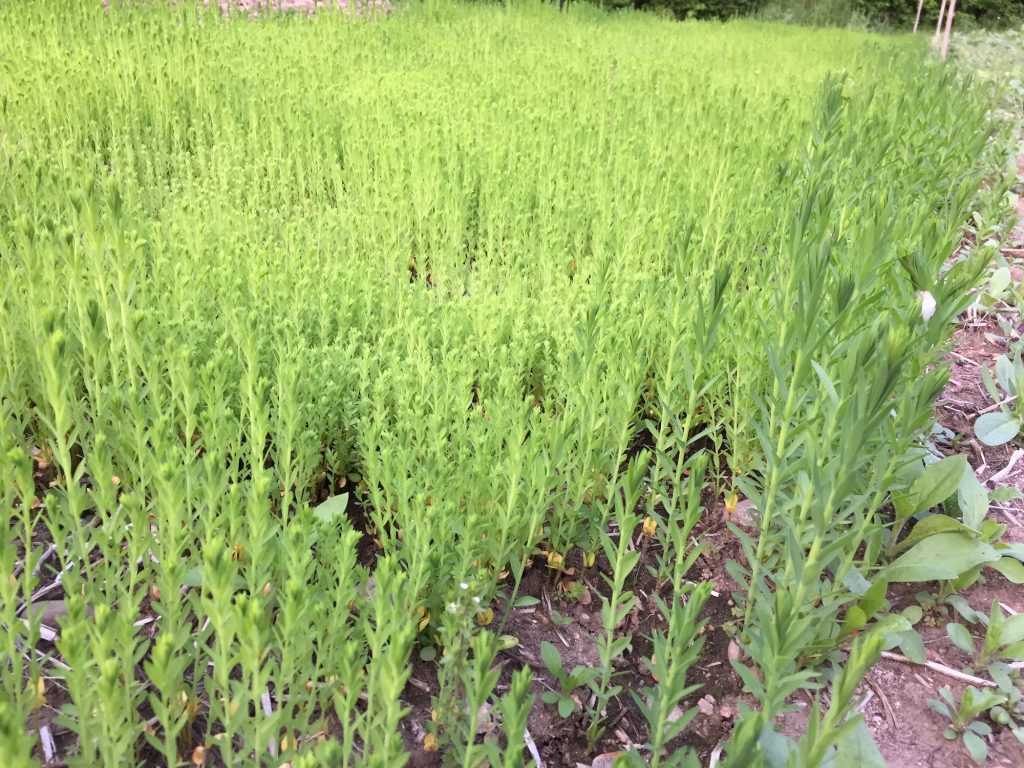 I could see the problem, but I didn’t know what to do about it. I couldn’t imagine thinning a 140 foot bed by hand, so I didn’t.

On June 9th, I ran into Ryan while I was checking on the flax. He said that his fields tend to be low in potassium and suggested adding some fertilizer. He kindly gave me a bucketful of this stuff to spread over the plot: 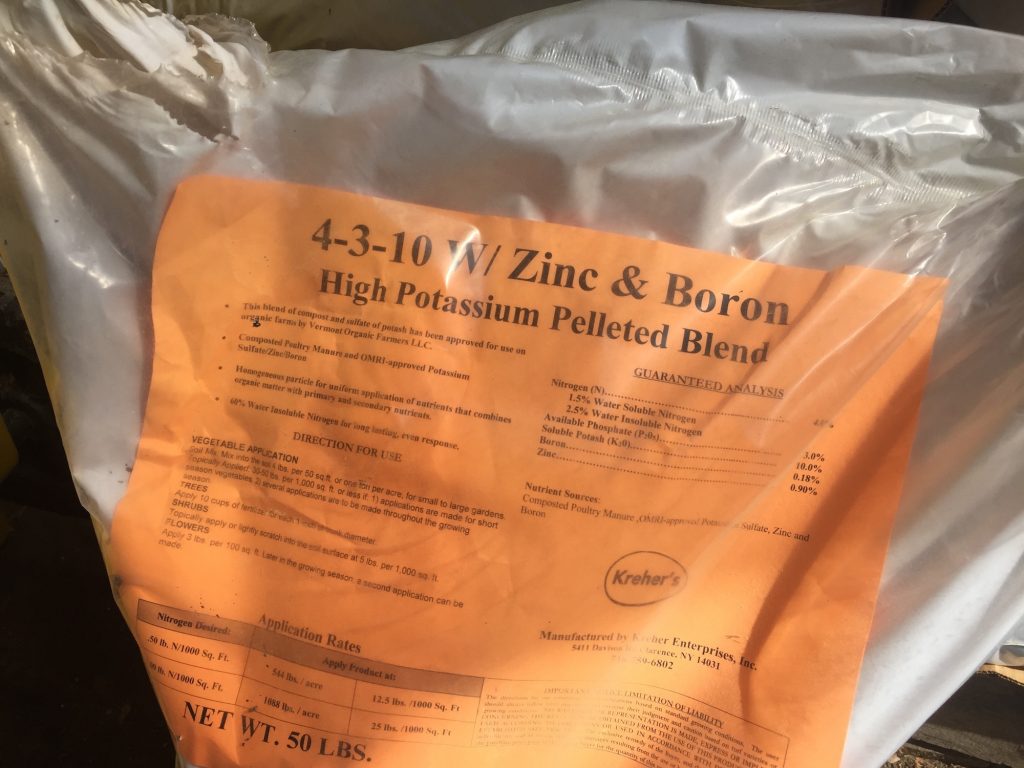 In retrospect it would have been better to add it much earlier in the season. At this point, the flax ought to be two thirds of the way to being ready to pull. I don’t think the stunted plants will have a chance to gain any additional height before they decide to just flower and set seed.

Here’s an overview of the plot on June 9th: 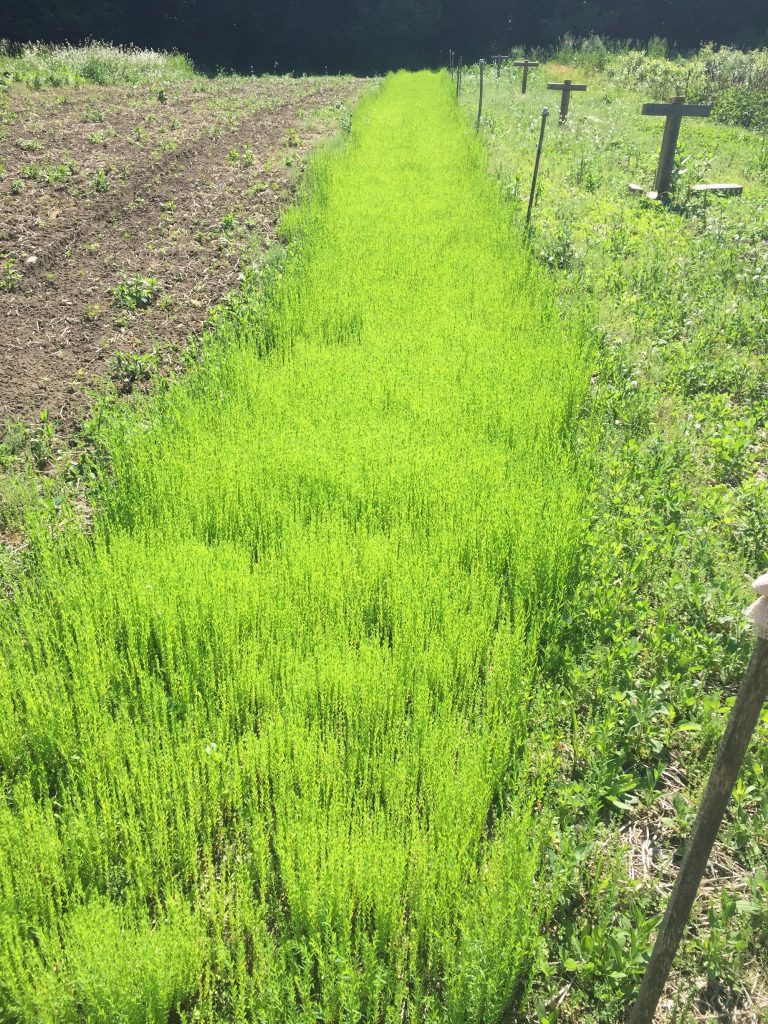 Here is a closer view: 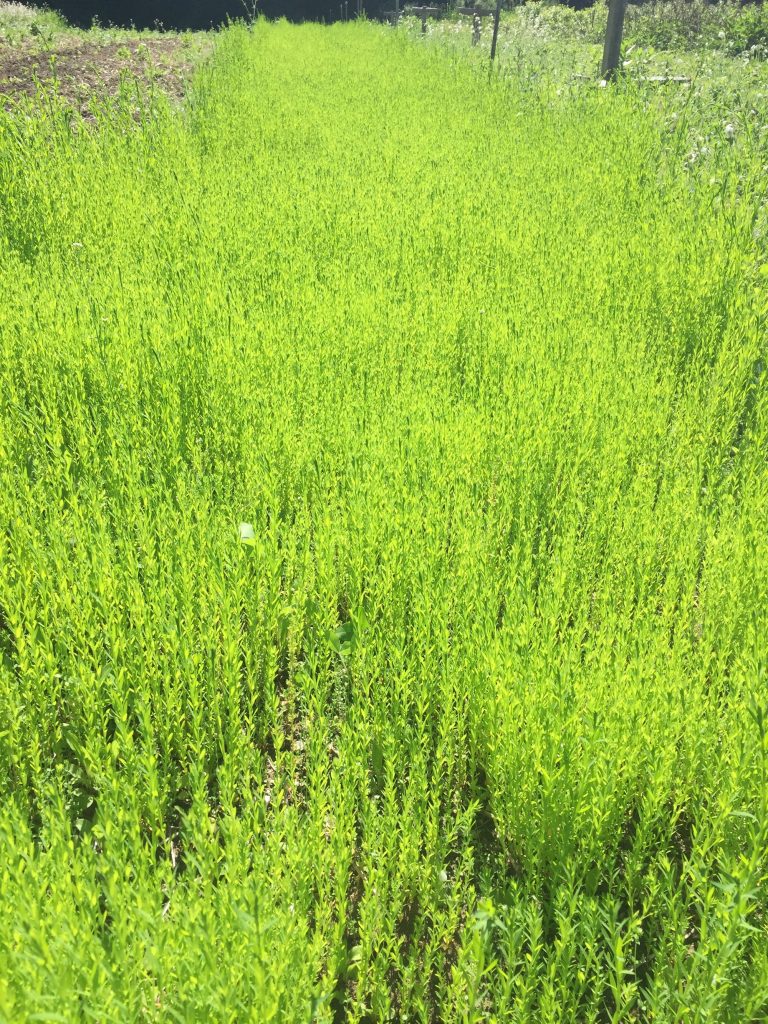 It’s vibrant and glowing but it’s not doing what it ought to be doing. The height should be consistent across the bed, and it should be getting ready to flower. Here are the edge plants compared to the rest on June 9th: 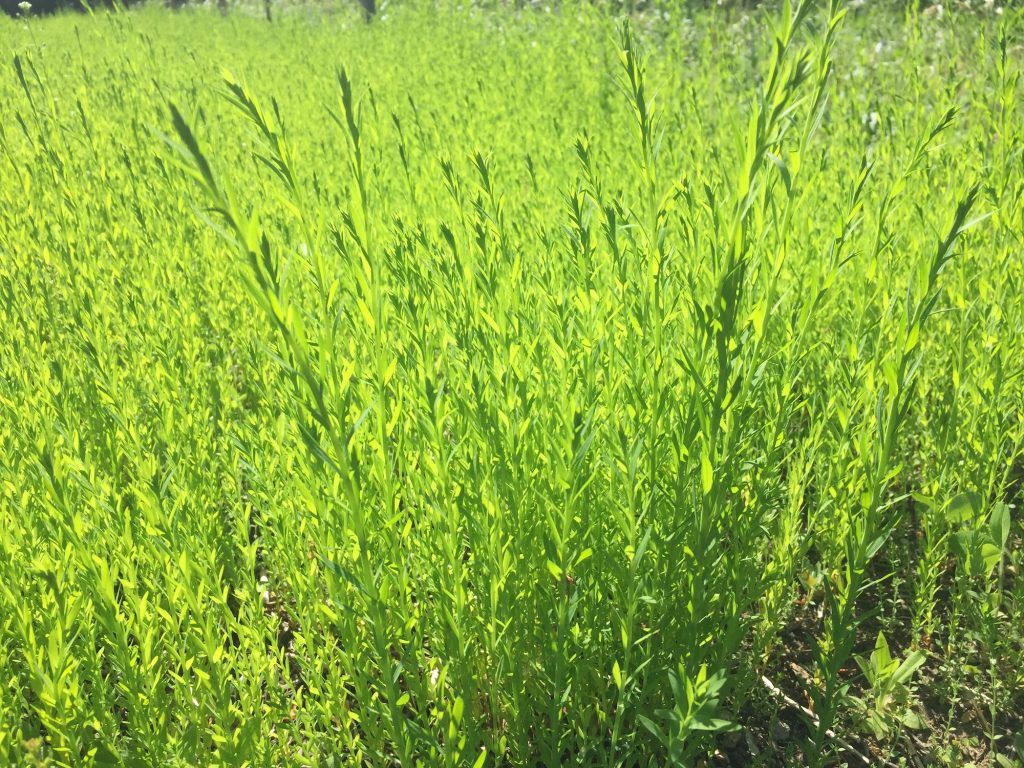 On June 15th, the tallest plants were forming buds and getting ready to bloom. I planted in mid-April, which means that the flax ought be be flowering by mid-June. Some of it will. Most of it won’t. 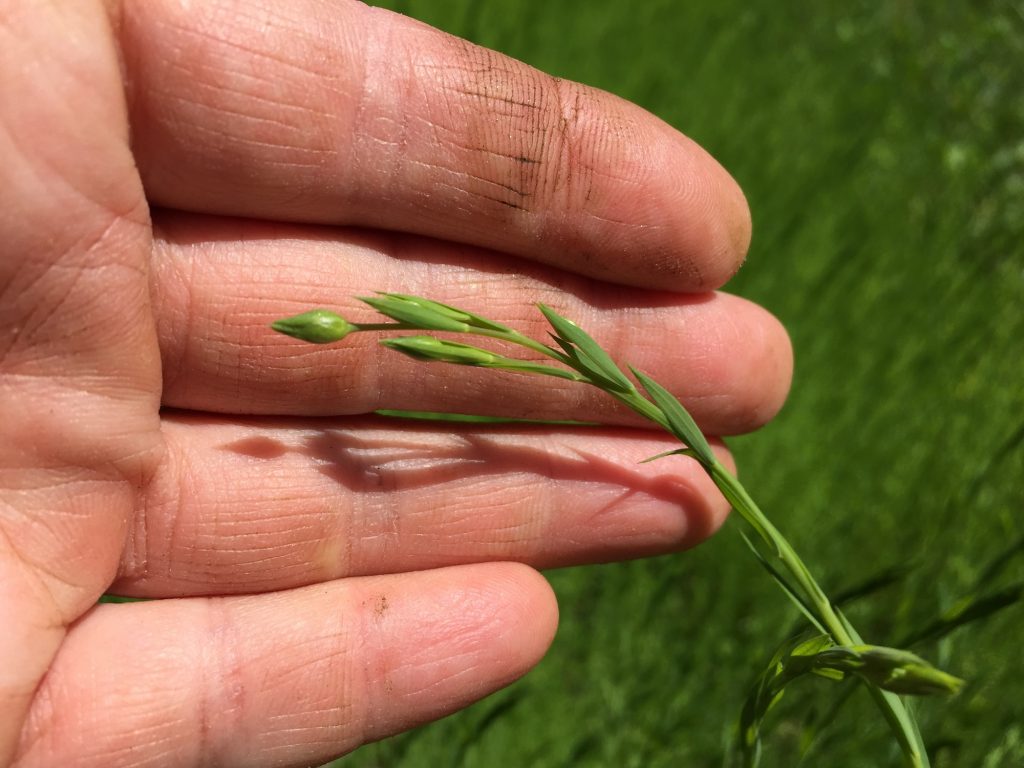 It looks like it will be a white-flowering type. I’ll know for sure when the flowers open later this week. I am growing a type called Suzanne this year, which I haven’t grown before.

Ryan suggested hoeing some channels and knocking down some of the stunted plants to create an edge effect throughout the rest of the bed. I think it’s a good idea. I guess I won’t know unless I try.