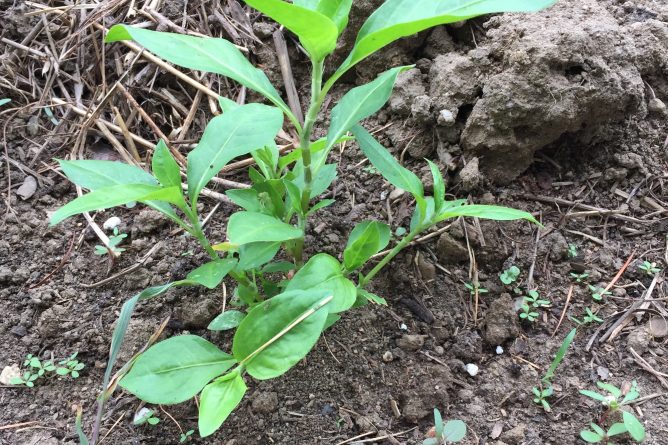 So, my attempts to germinate my own Japanese indigo seeds were futile. I kept scrutinizing the tiny little green things that were growing, but none of them seemed quite right. Not pink or plump enough. Eventually I gave up.

Jeff Silberman and Carolyn Wetzel to the rescue! Jeff has been growing Japanese indigo for several years as part of a sustainability project at FIT. Carolyn was driving down to Pennsylvania to teach a lace-making class. Wearing her New England Flax and Linen Study Group hat, she was also dropping off a custom-made flax brake for Jeff made by her neighbor. Gotta love the incredible skills and social networks of the Western MA hilltowns! On her return trip, Carolyn picked up some seedlings for me and dropped them off at our apartment.

At first I was puzzled and a bit dismayed. Dozens of teensy seedlings were crammed tightly together. 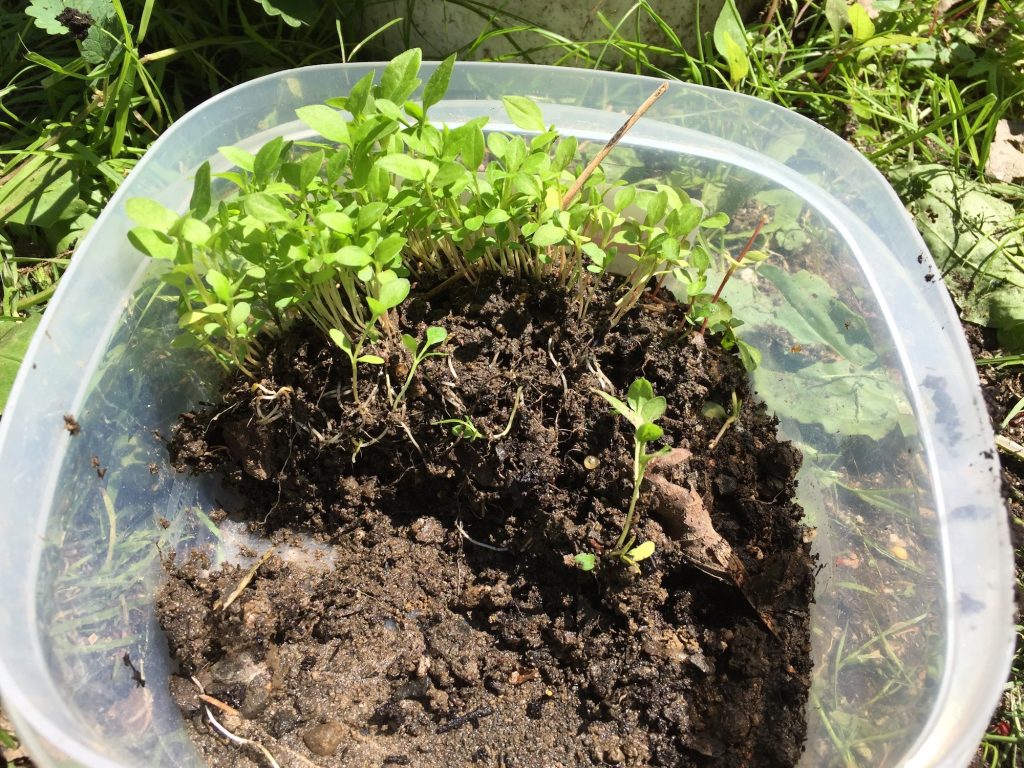 I conferred with Jeff. He said that they were very hardy and resilient, and could stand quite a bit of disruption. I used a plastic knife to separate a few at a time. 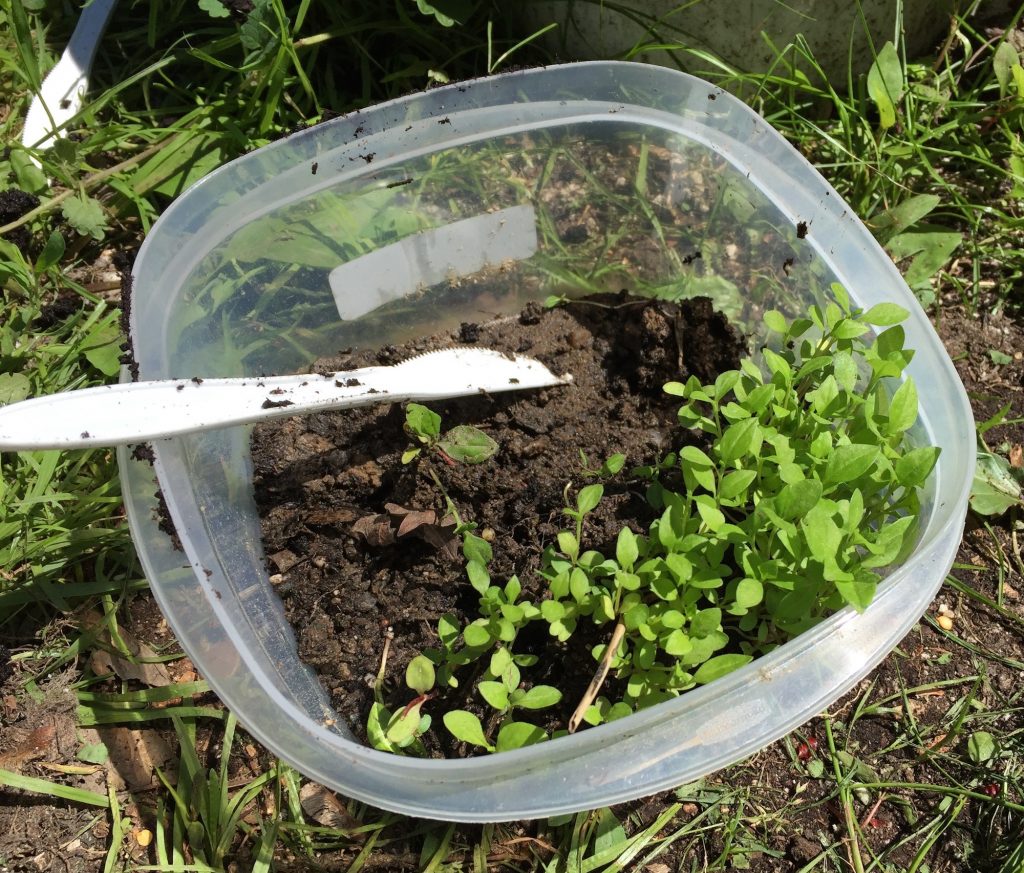 On June 15th I transplanted them into small pots. I regretted the violence done to the roots. I was literally tugging teensy roots apart with my hands. But after my over-crowded flax experience, I figured it was better to give them room to grow. 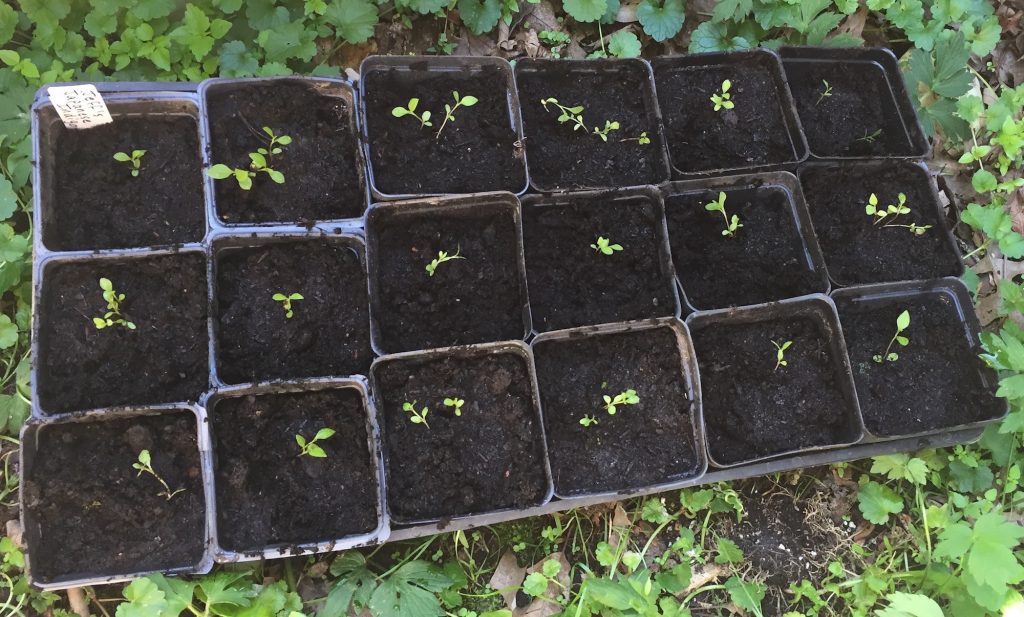 I was worried that they would all die of shock. The next morning, though, they looked fine. Here they are on June 16th: 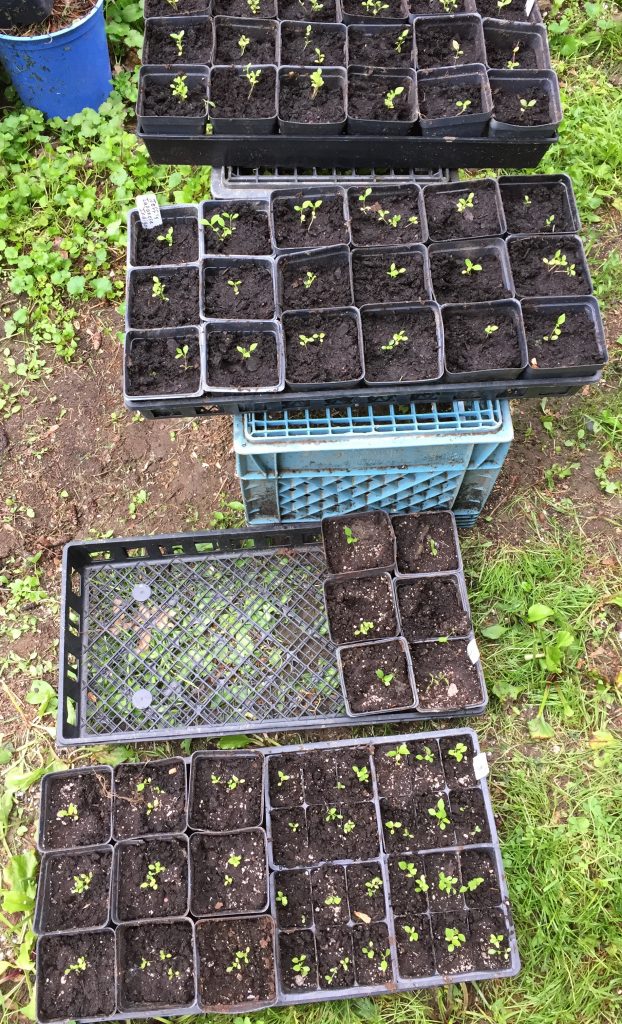 Behind our apartment there is quite a bit of squirrel action. They run amok and tend to knock things over and dig things up, including the Japanese indigo seedlings. So, on June 19th I covered the seedlings with plastic covers in an attempt to protect them. Sammycat inspected and approved the set-up. 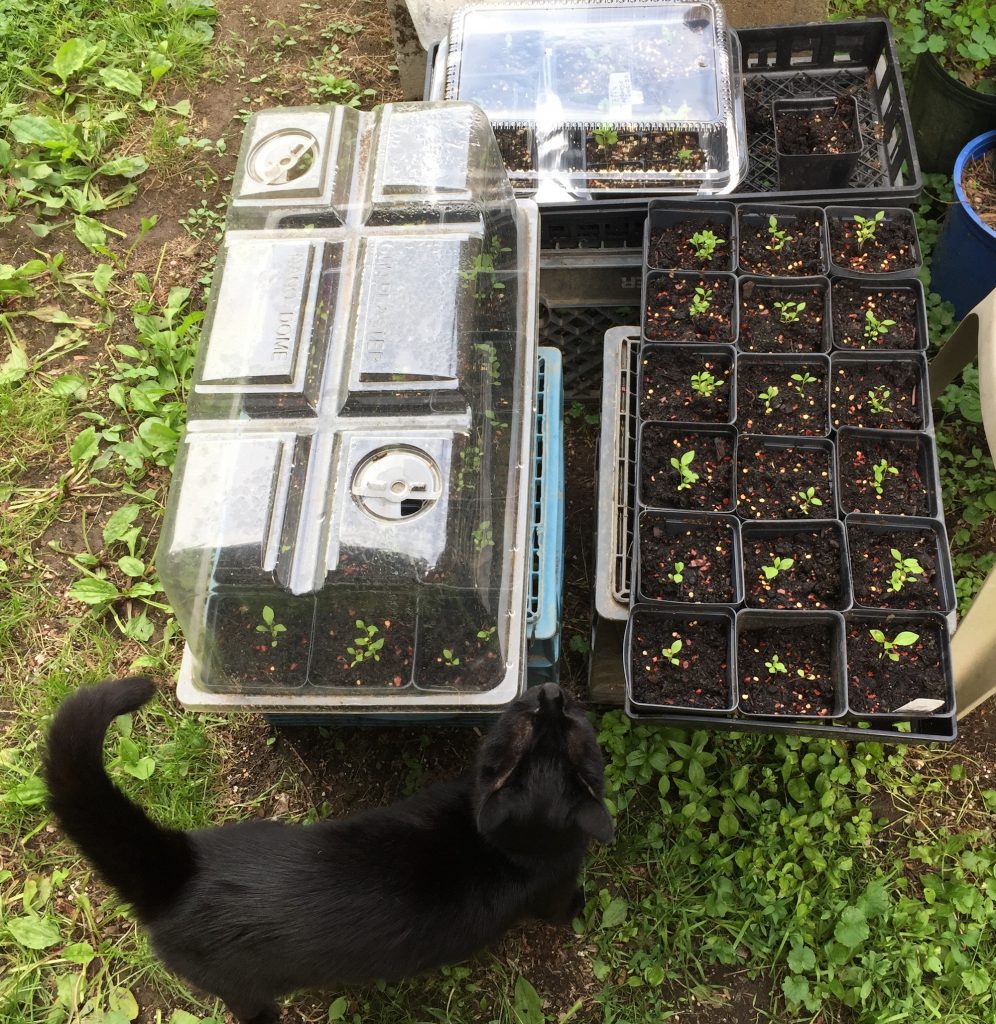 I also sprinkled red pepper flakes around the plants. The squirrels had been digging and we hoped that the capsaicin would dissuade them. All the plants got the same treatment (we also grow tomatillos, chili peppers, and a bunch of other plants). It mostly worked. This plant wasn’t so lucky: 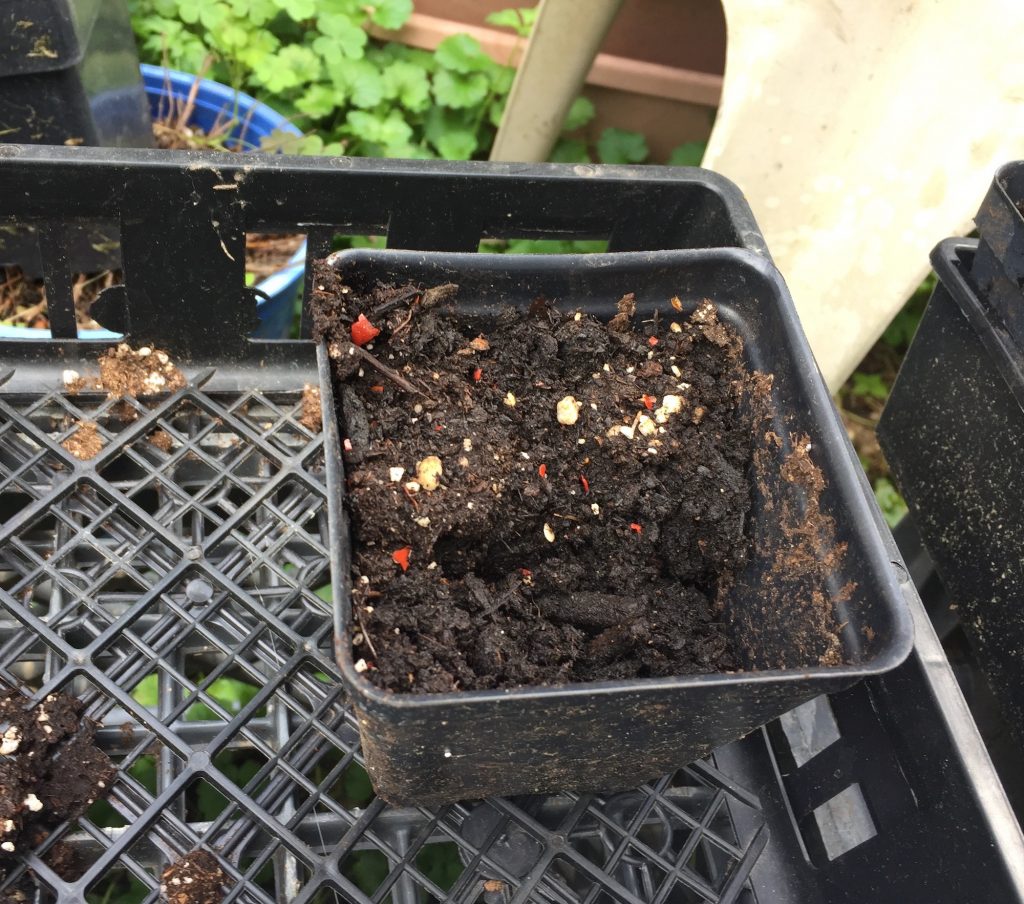 Here’s a closer view of some of the other Japanese indigo plants: 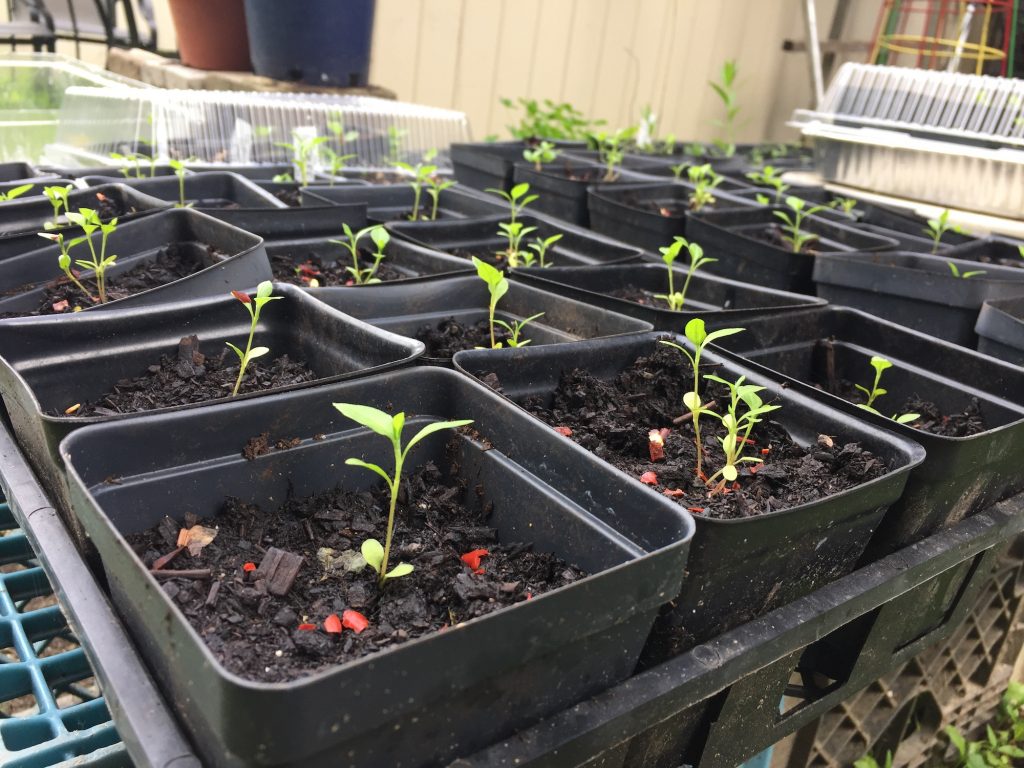 I guess I didn’t do any further photo-documentation until they were ready to transplant into the garden bed. The bed I was planning to use had been occupied all spring by the second year woad plants that were going to seed. On July 4th the woad seeds were ripe. I harvested them and cleared the bed for a new crop.

Here are most of the transplanted Japanese indigo plants on July 7th: 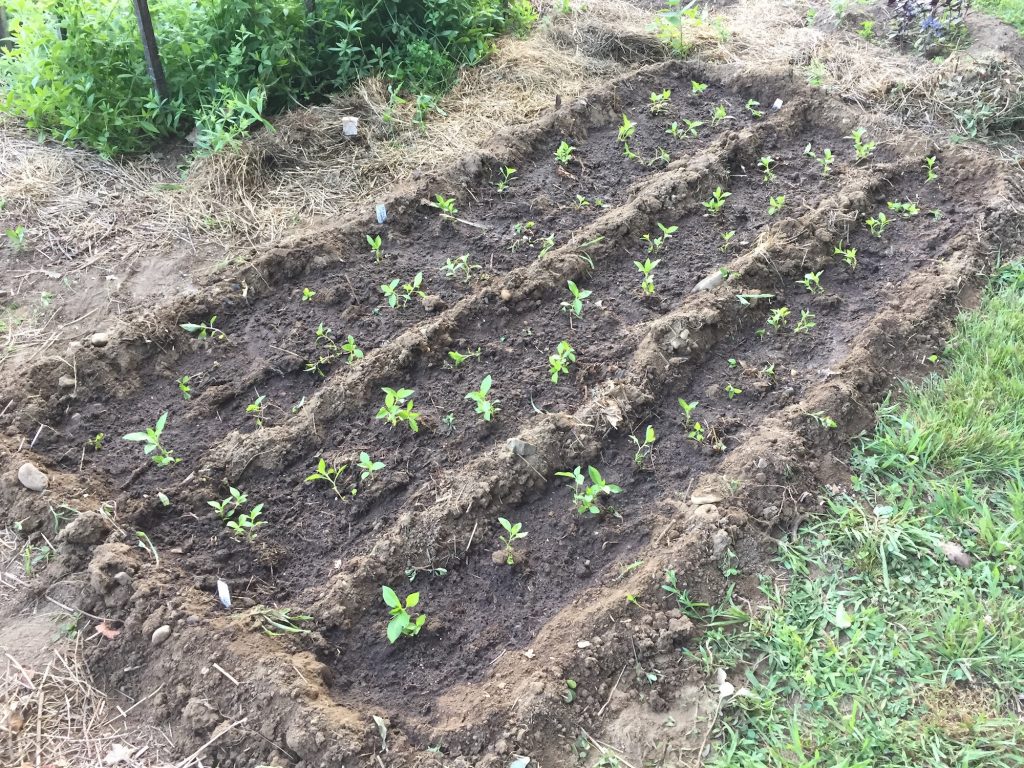 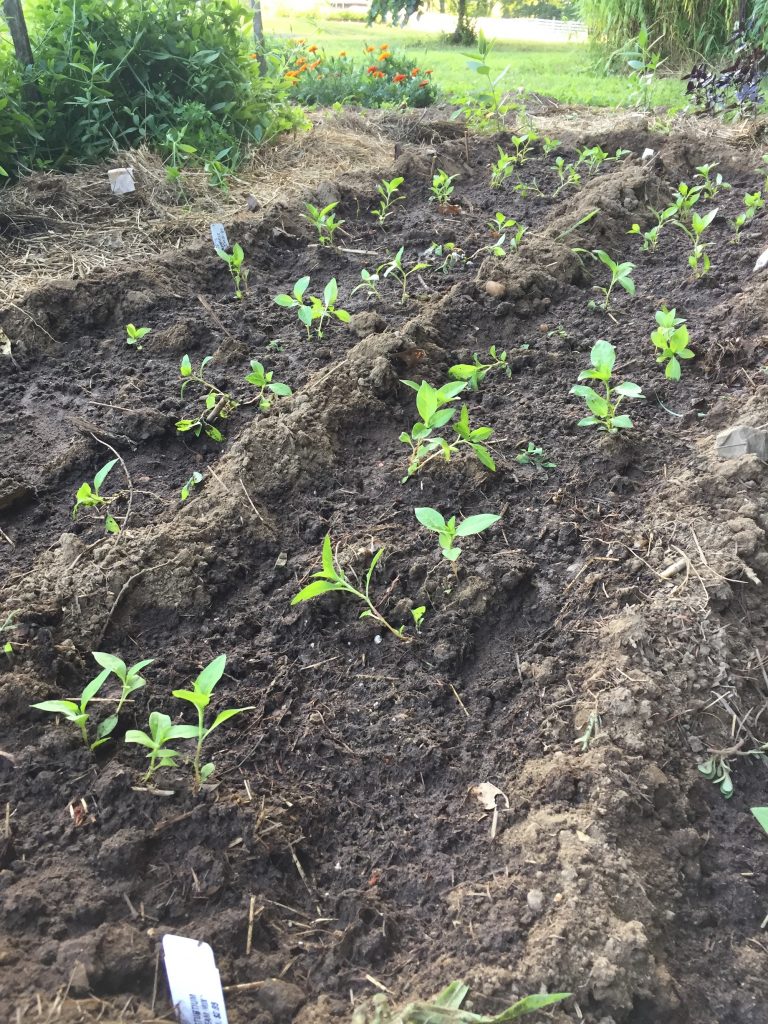 There have been a lot of rabbits this year. This photo is from our school garden, but I’m including it because I didn’t manage to photograph the rabbit at Bramble Hill. 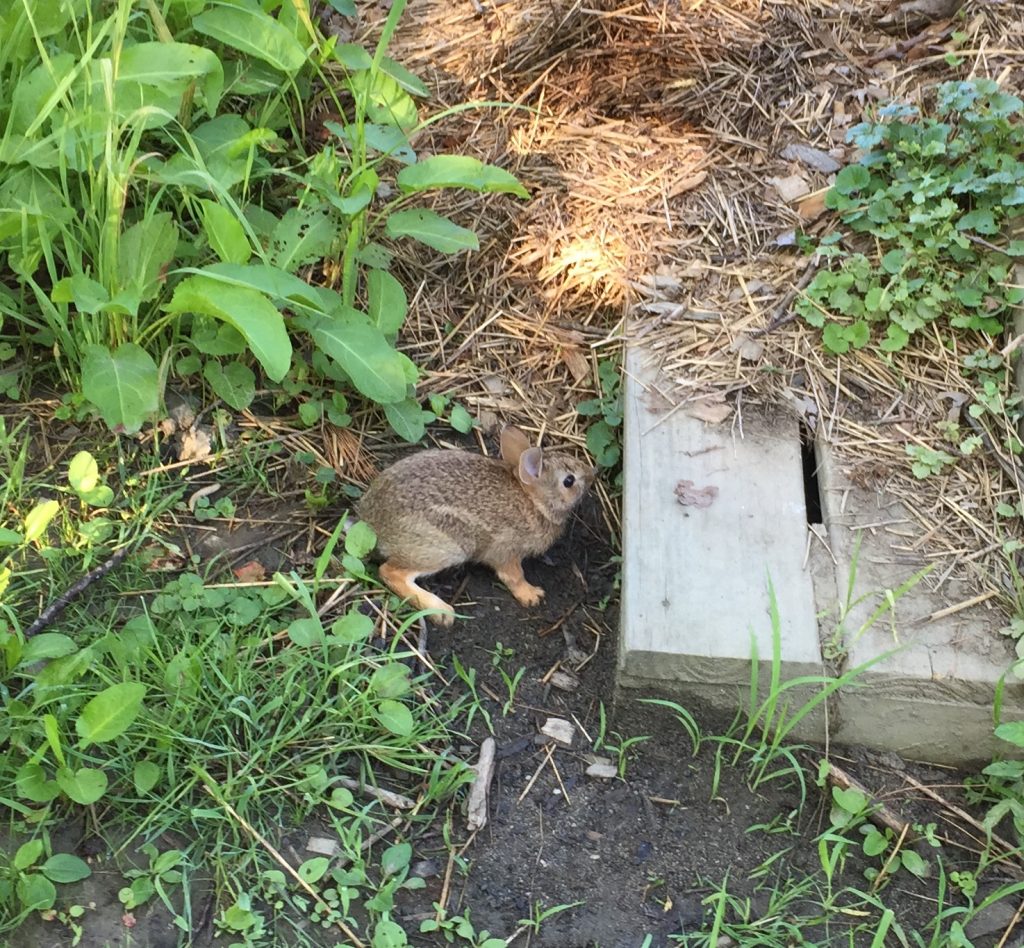 The very day that I transplanted the Japanese indigo seedlings, I arrived at the garden to find a rabbit sitting right in the midst of everything! Now, the bunny at the school garden was rightfully scared and hid under the platform.

Not so the bunny at the Bramble Hill Farm plot. Instead of running away like a small creature might normally do when a human comes along, it just shuffled over and settled down under the amsonia like it lived there or something. Cheeky rabbit.

So, I figured I needed to protect the seedlings from chewing. Here was my first effort on July 7th: 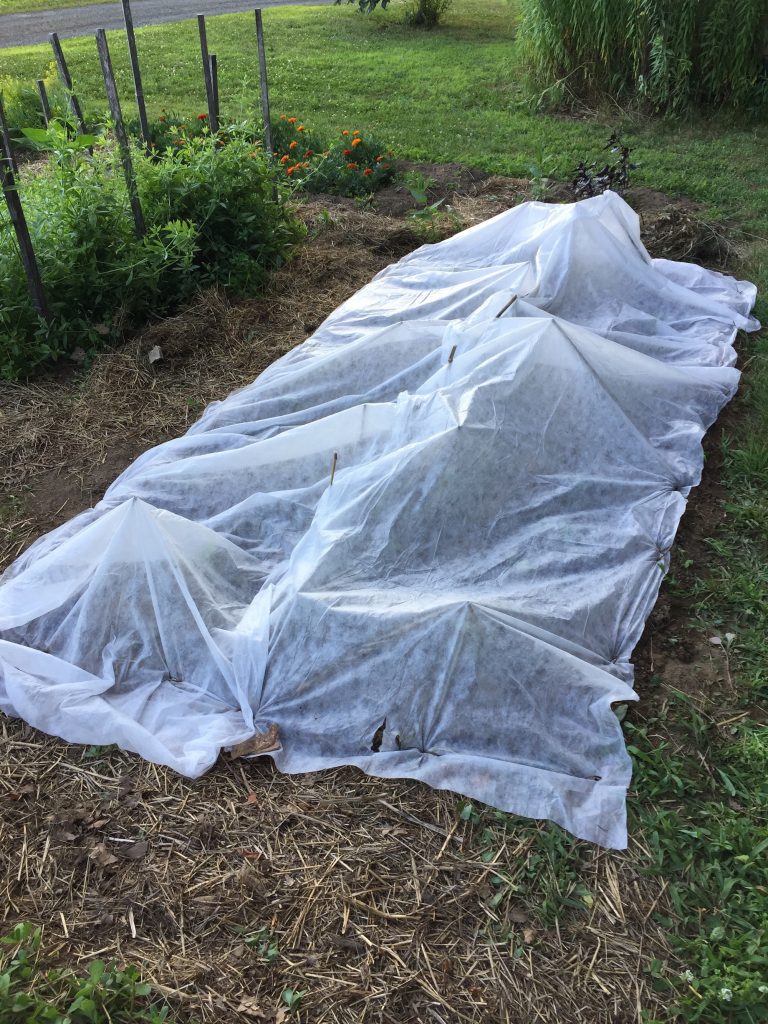 It was enough to discourage the rabbits, thankfully, but I tightened things up on July 8th: 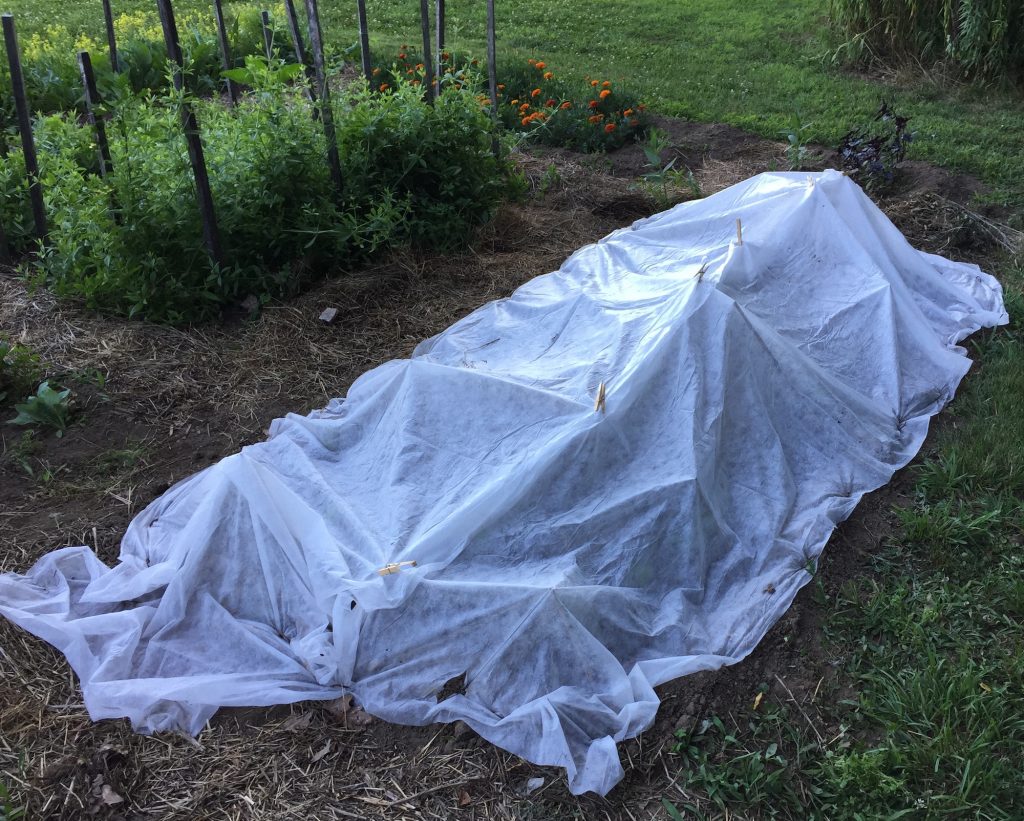 Eventually we had a hot spell, on top of a long dry spell. At first I left on the row covers thinking it would provide a bit of shade. But on July 18th I figured the time had come to uncover the plants and let them take their chances with the rabbits: 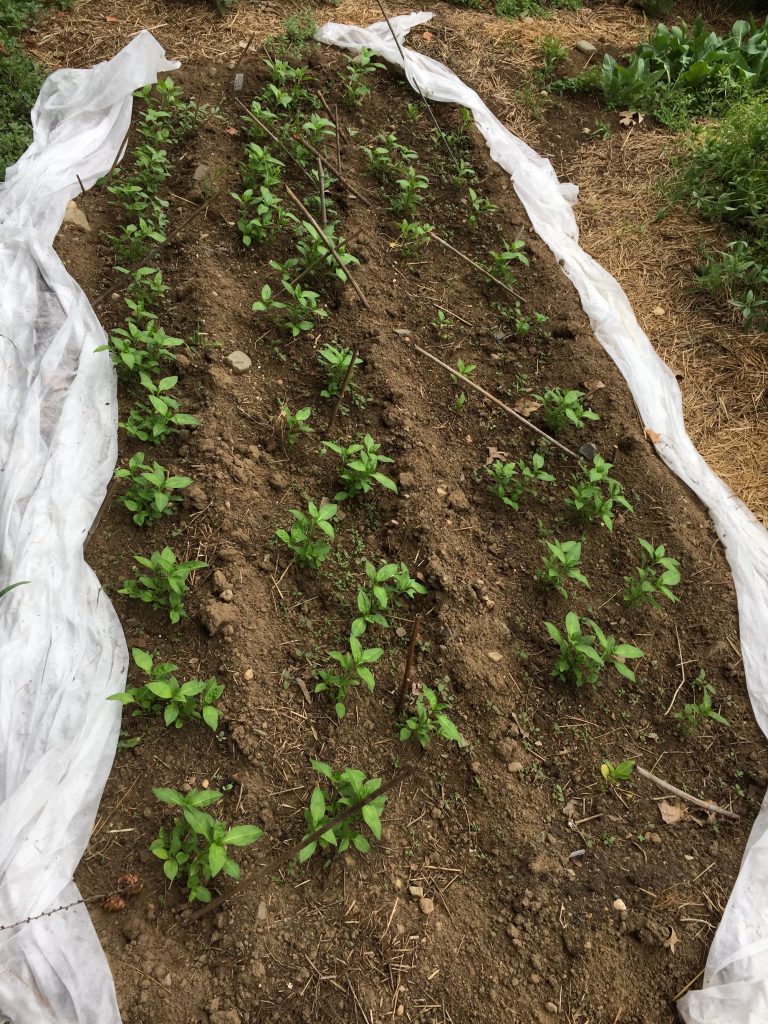 On July 18th the seedlings were looking great: 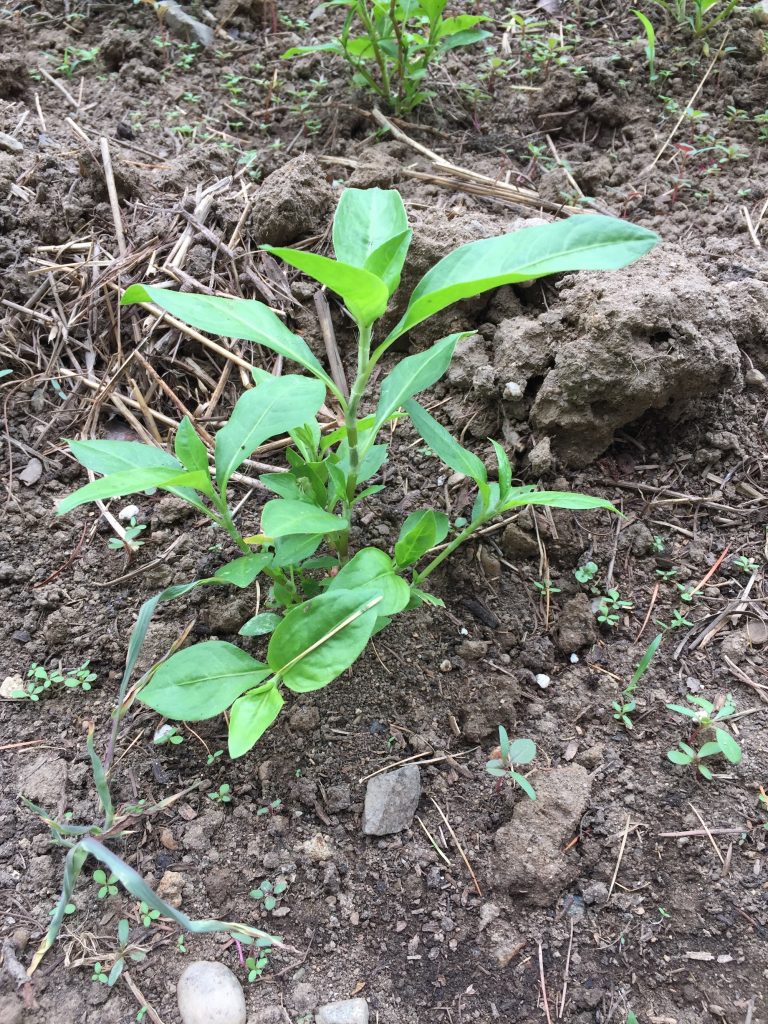 The rain barrel got low, so I had to deliver water via car, but on July 20th, despite the hot spell, they were thriving. Yesterday, July 22nd, we had heavy rain. The rain barrel is full again. I am optimistic about continued health and growth.