On Friday July 13th and Sunday July 15th I harvested the flax at our community garden plot at Amethyst Brook. It took two days because there were a lot more plants in these plots, and because the v.n.s. and the Marilyn had such a problem with lodging that they were a mess to sort out and bundle up.

Here’s the v.n.s. looking toppled after it got knocked down three times or so, and I tried to encourage it back to a more upright habit. But once it went down, it was down. 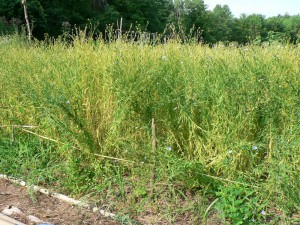 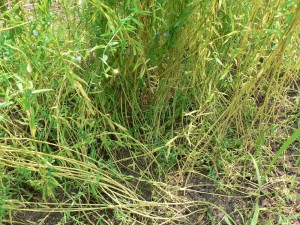 Above, a close up of the mess. 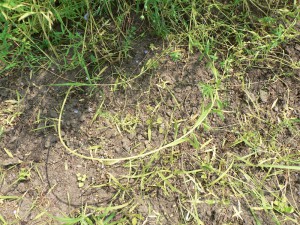 Here’s a patch where I pulled up most of the plants so just one stalk is isolated. You can see how curved the stalks of the fallen plants became. They must have kept growing after they fell over, but were permanently curved. Hopefully I will get to look at some of these under a microscope at some point to see if the curve is in the actual bast fiber or not. 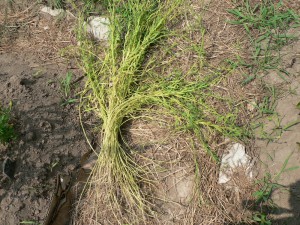 Here is a bundle of the v.n.s. Some are nice and straight and some are all bendy.

Now, here is an interesting observation. A friend in the flax and linen group reported that she had seen a chipmunk climbing the stalks of her flax plants at Historic Deerfield. Shortly after that I witnessed not one but two chipmunks in our garden doing the same thing, but since the seeds were not ripe yet I couldn’t imagine what they were up to.

It turns out that unripe flax seed is very desirable if you are a little seed-eating creature. 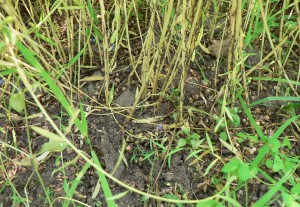 Above you can see a lot of seed debris on the ground in the v.n.s. section. This may explain why I got such a crappy yield of seed from the garden last fall. I had many theories, including that I didn’t have enough bee visitations, and that the mature seedpods shattered. Both of which are probably true. However, I can now add tiny mammals to my list of flax seed foes. 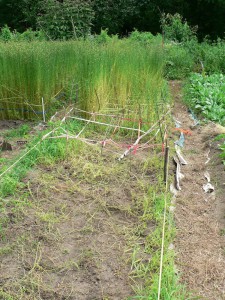 And here is the v.n.s. bed all pulled up. Next was the Evelin.