Between Wednesday July 11th and Monday July 16th I pulled up all my flax. I started a bit earlier than 90 days after planting (I planted all the plots the same day, April 15th), and earlier than 30 days after peak bloom (which was around June 21st). These had been the two harvest benchmarks I had in mind all summer. However, we have had such hot, dry weather that despite my diligent watering efforts the flax was just done. Usually people recommend pulling it up when the lower third of the stalks turns yellow. I have typically pulled it when more like half or even two thirds of the stalk is yellow. You can see in the photos that this year a lot of the flax was entirely yellow, and a few stalks had even begun to turn brown.

I have read that if you pull it up earlier you can get finer fibers. I have always pulled the whole crop at once, so I’ve never had a basis for comparison.  Another year, perhaps, I will harvest sections of the crop at different times and compare the fibers. But not this year.

The flax at Small Ones Farm was most mature, so I harvested there first on July 11th. You may recall that the v.n.s. came in very sparsely overall, and especially so at Small Ones. For some reason it also was the shortest there. I am not sure what factors contributed to this. I added the same amount of compost and manure to this plot as I did to our community garden plot, and I think I watered as often. One hunch I have is that the community garden is right next to a stream, Amethyst Brook, and it gets heavier dew in the mornings and is a bit more humid in general. But that doesn’t explain the difference in height between Small Ones Farm and Amethyst Farm. Amethyst Brook runs right through Amethyst Farm, but my plot was uphill from it quite a ways. The mysteries of flax.

Earlier in the season I measured out four foot by four foot grids to get a sense of how many plants were growing in a square foot. In these grid-areas, I bundled the plants in one square foot of the grid together. That is, one bundle for one square foot. Here is the first row of the v.n.s. grid after I pulled it. 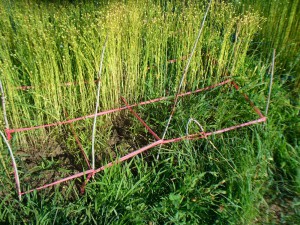 All the green growth is grass and other weeds.

The Evelin grew taller than the v.n.s., as it did at all the plots. Here’s how it looked right before I pulled it up. Gorgeous, right? It’s glowing. It’s got a secret power that radiates. 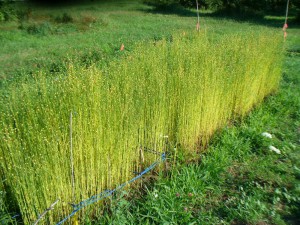 Here’s a close-up of the degree of maturation in the seed capsules. 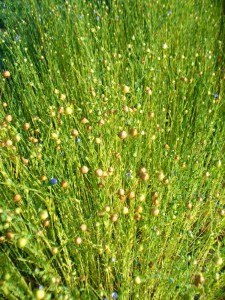 Some were still green, but many had begun to turn brown, and a few were totally ripe. I think the hot weather stressed the plants and they set more seed and put their energy into maturing it earlier than they otherwise might have done. Typically seeds are still green when I pull the flax. Here you can see that a few plants are still blooming, and there were still quite a lot of bees buzzing around. I thought this was interesting because by this time there were tons of other flowers blooming, including a Butterfly Bush in the childrens’ garden right next to my plot and Queen Anne’s Lace all over the place. I have read that flax blossoms are not a preferred food source for bees, but they don’t give it an absolute cold shoulder even when other foods are available.

Here is the whole crop from Small Ones Farm hanging root-end up on the fence to dry. 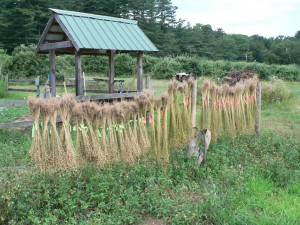 You can see how much shorter the non-specified variety on the left (green tags) is compared to the Evelin on the right (orange tags). And how much more of the mass of the plant is devoted to seed production in the plants on the left.

Someone recently pointed out to our flax and linen study group that this must be a dual-purpose seed stock. Richter’s lists it as a fiber flax variety but it also branches and sets a lot of seed. She said she never saw so many seeds in any fiber variety she has grown, and she has been growing flax for ten years. Because I was growing two, or even three, varieties close together this year I did not plan to save seed. It seems now that it might have been a good year to do so. Ah well. When it is all retted and processed, I hope to be able to tell if there is a significant difference in the quality of the fiber from one variety to another.