I recently heard a little rhyme about the growth habits of perennials that I couldn’t believe I had never heard before: Sleep, creep, leap. This year my yarrow finally got to the “leap” stage. Yarrow, of course, grows wild all over the place and there isn’t necessarily any need to cultivate it. I have only seen it as a white-blooming wildflower (Achillea millefolium, I believe) which sometimes has a purplish or pinkish tinge. It is beautifully frothy and creamy looking.  But I do cultivate it because it comes in such beautiful colors, and I have tried several varieties in the garden over the years. For some reason, the red, yellow, and orange ones have not survived, but this year my pink-flowering ones were lush and tall and bloomed in abundance.

Here is a young little yarrow plant early in the spring. It is feathery and burly at the same time. It looks a little bit like Queen Anne’s Lace when it’s young, and they often grow in similar places. But yarrow is fuzzier, almost furry, and more dense. 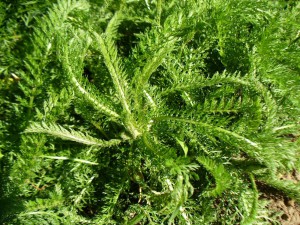 Here are some buds. At this stage it can look velvety and fuzzy and silvery grey. 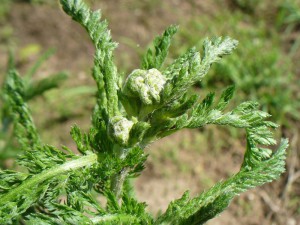 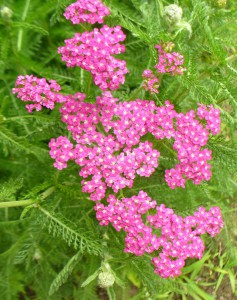 This is what my pink-flowering type looks like in full bloom. It’s cheery, and I find it kind of humorous. The shade of pink is so bright that it entirely over-rides the feathery, lacy quality of the foliage.

I waited until it had all gone by and started to set seed, then I cut down the whole bed. It weighed a little more than 4 lbs. I cut it up with pruning shears and divided the material between two pots. 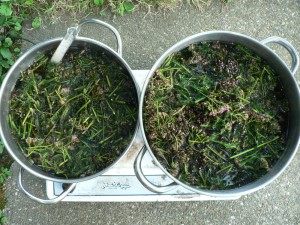 I brought them up to a simmer, simmered for an hour, and then let them sit overnight. The color of the flowers faded quite a bit. 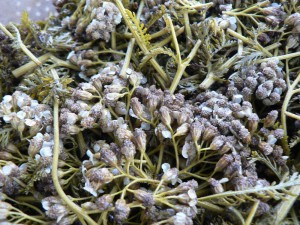 The dyebath was very dark and pungent, and I probably could have re-simmered the material with more water and extracted more color but I wasn’t exactly sure what color I’d get and whether I would like it. Rita Buchanan says, “Yarrow isn’t a versatile dye plant, but it’s certainly a reliable garden plant.” So I was expecting something in the commonplace yellow-gold range. I just strained out the plant matter and composted it.

In the first dyebaths I dyed two skeins of 2/8 wool (alum mordant) weighing 3 oz. and 2.5 oz. Here’s the yarn from the first dyebath next to some dried flax bundles that I was rippling (removing seed pods from) while the exhaust baths were running. 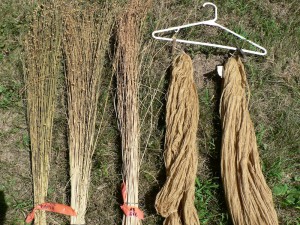 The color was nice and rich, so I exhausted the baths with two more skeins of the same wool, 2 oz. and 2.5 oz. As you can see in the photo below, there is barely any difference between the first bath (on the left) and the exhaust (on the right). 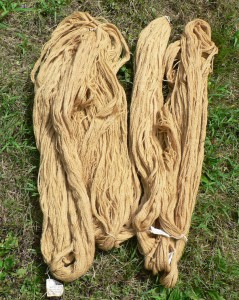 The color is a rich, luminous golden brown. I like it. Unfortunately I dumped the dyebath already (everything has been molding very quickly in this hot humid weather) but now I can look forward to my yarrow dyebaths next summer.