I’ve been putting off writing this post for a while because the events I’m about to relate are extremely regrettable and sad. Well, to me anyway. I cried a lot. However, it was also an opportunity to learn about the perils of seed saving first hand, so I am now ready to reluctantly admit that it was a learning experience.

Back in July I was very busy. I was in a National Endowment for the Humanities summer institute for K-12 teachers at UMass on the history of Native Americans in New England. We met from 9-4 each day, and at night I worked on the reading, homework, and culminating project. It was an excellent program and I was very grateful for the opportunity to learn from fantastic, creative scholars and activists. However, it also meant that I didn’t have time for other things, including flax. I’d been checking on the flax periodically, but didn’t devote as much attention to it as I would have liked. So, I was very excited when the institute was over and I could re-prioritize my flax experiment.

On the afternoon of Friday July 24th, I went over to our community garden plot to check on the flax. I was instantly suspicious that something was amiss when I saw that one of the isolation cages had come loose from the landscaping staples and was no longer secure at the bottom. 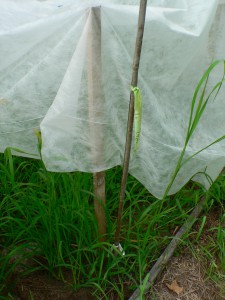 I had never left row cover on something for so many weeks, and I had only put the staples through a single layer of fabric. I didn’t realize that the staples would just pull out after a while, like so: 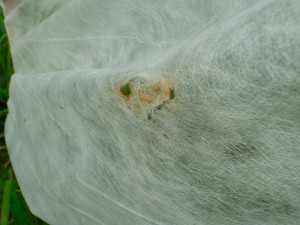 The rusty marks show where the metal was pushed through the cloth, but I hadn’t secured them firmly enough, so wind and rain, etc., had pulled the cloth up in some places and left the staples in the ground.

For a few moments I was just worried that my isolation system had been insufficient and the plants might have cross-pollinated, but gradually the magnitude of the disaster unfolded.

I took off the fabric from one of the little test patches and there were absolutely no plants there. Instead, it was like a miniature clear-cut forest. Little creatures had chewed up all the stems and eaten all the seeds. Here’s a glimpse of some of the chewed up stalks of Belorusskij: 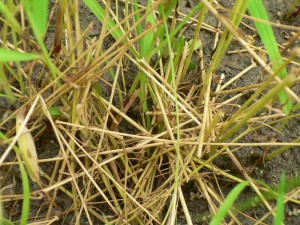 The harvesting procedure appeared to be sort of beaver-like: chew the stems, topple the plant, eat the seeds. The seeds were nowhere near ripe, so I’m not sure what was so very appealing about them, nor why the stalks were chewed up into such short pieces. The plants were still in bloom, as you can see from the sad little petals on the ground here of the types called Hermes. 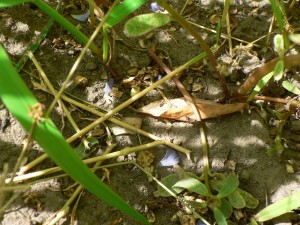 The seed pods or bolls were totally chewed up and there was debris scattered all over the ground inside each isolation tent. Here’s the debris from the type called Pinnacle: 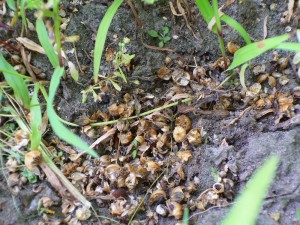 I gradually realized that the isolation tents themselves had been the reason for the total devastation. They provided a nice, protected space for small creatures to sit undisturbed by potential predators, eating away to their hearts’ content.

Most of the tents were actually still intact, it turned out. Inside these, the seed and poop debris collected along the inside fold of the fabric at the bottom. Here’s the bottom edge of the inside of the Pinnacle tent: 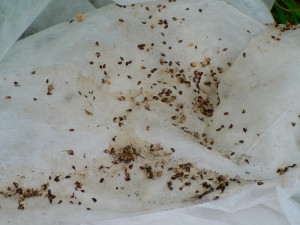 And here is the mess inside the tent of type 590: 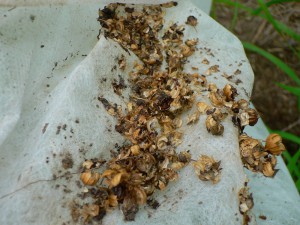 The few remaining stalks held either chewed up bolls or green, immature seed heads. I went home to sob, and then consulted Carolyn, the botanist in our New England Flax and Linen Study Group. Since there was no hope of saving seed from this batch, she suggested pulling up the remaining plants so we could assess them for fiber quality. I went back to the garden, pulled them up, labeled, and dried them. The yield of intact plants was pitiful.

These are the important lessons gleaned from this sad experience:

Third, weeds and other plants growing around the isolation cages also provide cover for rodents.

Fifth, check your flax every day while the seeds are ripening.

Fortunately, I had divided my experiment between two different plots. I never get things right the first time, so even at the beginning of the experiment I had anticipated a high likelihood of some kind of failure. Dividing it up seemed prudent, and in fact it was. I was immediately able to put my new information to use at Amethyst Farm and was able to save the second half of the experiment from the same rodent fate.