After I discovered the rodent catastrophe at our community garden plot, I fearfully headed over to the other site at Amethyst Farm to assess the situation there. Some damage had already occurred, but it was really minor in comparison.

Here are some chewed up stems from the type nick-named 448, and another variety that I apparently forgot to make note of below that. 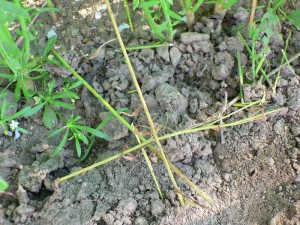 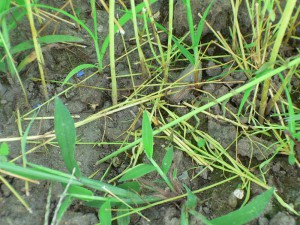 I planted at Amethyst Farm 7 days later than the community garden, so maybe there was less damage because the plants were less mature. Or, maybe it was because it’s more exposed to predators. I see and hear red-tailed hawks there regularly, and have seen owls as well. Whatever the reason, I was relieved. It gave me a chance to devise a plan to protect this crop of seeds.

Since the isolation tents provided cover to the rampaging rodents, I first removed a few of the isolation tents from the varieties that seemed to be done blooming. However, I realized over the next couple days that the plants were actually still flowering prolifically. I’d been there in the late afternoon on the 24th and hadn’t seen any flowers, but I hadn’t taken into account the fact that flax flowers drop off after about noon or so. So, back on went the tents.

The Brennans had harvested their garlic right around that time, so some of that mulch, i.e., protected habitat, was gone. Here are the bare garlic beds next to the asparagus. 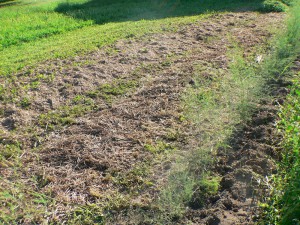 I figured step two was to weed thoroughly alongside the flax beds and remove the rest of the ground cover. This took a few days because I had not been keeping up the with weeding in July, so it was a big job. 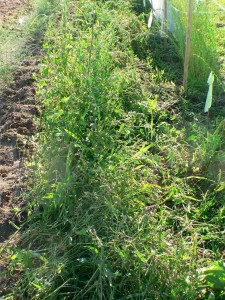 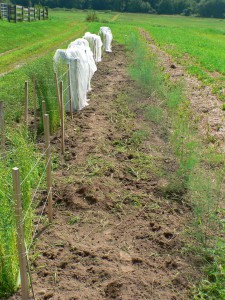 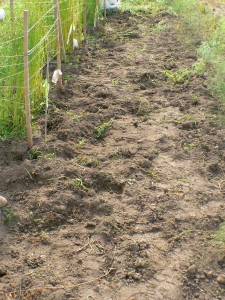 Here’s one of the piles of weeds. There was another one the same size on the other end of the plot. For comparison, the isolation tents are about three and a half feet tall and three feet long. 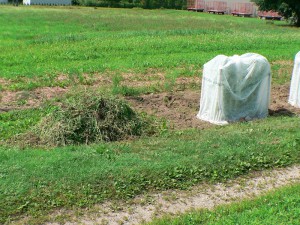 I felt bad about disturbing this poor toad, who was slowly ousted over the course of a few days. But I figured, if the ground was too exposed for a toad then maybe it would be too exposed for whatever small creatures I was trying to outwit. 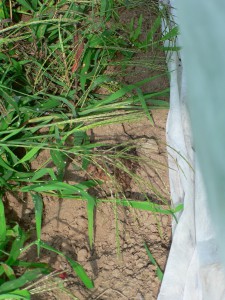 Meanwhile, I’d been over to check on the various plantings at school and at Bramble Hill Farm. All the while I was thinking unkind thoughts about rodents, and the following story unfolded. First, I saw a snake in the compost bin at school: 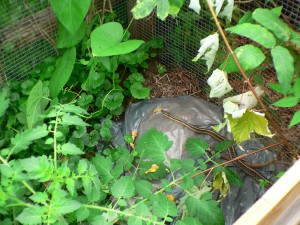 It had been happy and warm, and didn’t seem pleased that I had lifted up the cover and poked my nose in. Mere minutes later, I came across a snake skin in the tansy alongside the wall of my classroom: 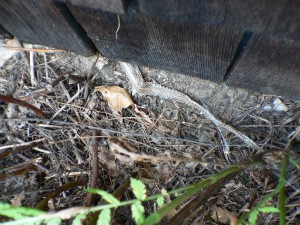 I thought, “Gosh, snakes everywhere! I wish there had been snakes to eat all those rodents at the garden. Where are snakes when you need them?” With unkind thoughts about rodents in mind, I headed over to Bramble Hill Farm and what did I find? A sad drowned mouse in one of the watering cans by the dye and fiber plant garden. I didn’t take a photo because that seemed disrespectful. Poor little thing. I couldn’t help but feel bad for causing the death of that mouse by leaving water in the can, even though moments earlier I had been thinking violent thoughts about rodents. Welcome to my brain.

Farmer Hans over at Bramble Hill had rigged up a perimeter of coyote pee to keep the woodchucks and rabbits away from the Common School’s pumpkin patch. 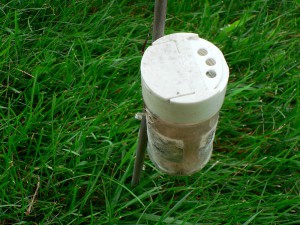 And here’s what it takes to maintain a perimeter: 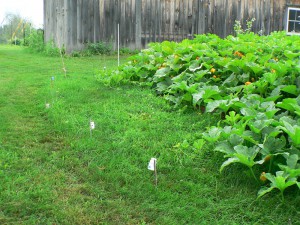 I thought about coyote pee, and how one might possibly entice a coyote to pee into a jar, and suspected it was most likely not a cruelty free exercise. So, no coyote pee for me. I already had an accidentally dead mouse on my conscience.

Sammy cat to the rescue! Our new cat Sammy (well, we’ve had her for a year and a half now) has an odd habit. Once in a while she pees in the bathtub. We think it’s very considerate, when one thinks of all the places a cat might choose to pee. So, thus far it had just been a quirky habit of little consequence. The thought occurred that cat pee might perhaps be as off-putting to rodents as coyote pee. So, I soaked up some of Sammy’s pee at the next opportunity, using little scraps of cloth, and safety-pinned them around the flax. Over the following week or so, I was able to add a second, and then a third, cat pee-saturated scrap of cloth. 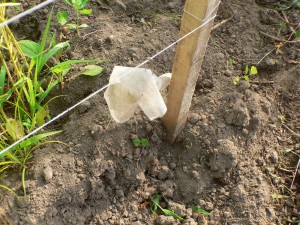 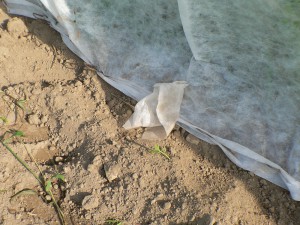 As of today, August 19, I can report so far so good. I have noticed very little additional rodent chewing and the seeds are maturing nicely. Phew!