“What’s a bloody L, Mummy?” This is a direct quote of myself as a young child–or perhaps one of my sisters, because sometimes those memories are blurry. The backstory here is that I grew up in London in the 1970s. A family friend used the phrase “bloody hell” to express exasperation and dismay, which translated through his accent and my young ears to “bloody ‘ell”. Was it the letter L that had somehow become bloody, and if so how? Was it bad? Why? And why would you bring it up in conversation if it was so bad? Parsing grown-up-speak isn’t easy.

Now I will get to the point: blood is what my blog post is about. And also my feelings about it, as expressed by this old-fashioned swear. Exasperation, dismay, despair. An existential questioning… What am I doing? I can’t believe I’m doing this. Is it doing any good?

I have been a vegetarian since about 1983, and the question, “What is the minimum amount of animal suffering or death necessary to sustain agriculture for humans?” has been on my mind for a long time. Over the years, more and more dead animals have crept into my gardening scheme. First it was horse manure generously offered by the Campbells in Belchertown. No death involved, just poop. Next it was dead sea creatures (Coast of Maine) then dehydrated composted cow manure (Moo Plus from Vermont). Dairy farms=dead male calves so, death? Yes. Sorry, babies. Moving right along… Most recently, I have been using an organic fertilizer from North Country Organics that contains blood, bone, and other animal body parts. That’s definitely death. I am sure they were not killed for their blood or bones, but they are dead nonetheless.

I never did write a blog post about my first crop of carnivorous woad, but it sat with me pretty heavily and I thought about it for a long time. Woad is a heavy feeder and our soil is very sandy and low in organic matter, despite leaving swaths of it fallow every summer and periodically seeding with clover. Hence, dead animals…. Over time I have somewhat reconciled myself to the fact that I prioritize plants over animals in some cases. It’s in the same boggy territory as the fact that I’m not a vegan. You face up to what it means, and you live with it.

What does it mean for my flax? Well. First, I fed it with dead animal body parts. Now, I want to stop whatever is chewing it!

So, on Tuesday June 21st, I decided to buy some kind of small rodent repellent. Our local Amherst Farmers’ Supply carried this: 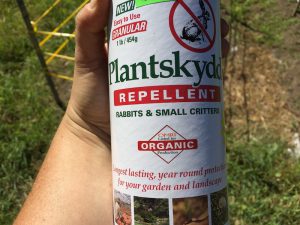 This formulation of Plantskydd is dried blood from pigs and/or cows. It is little brown granules known as blood meal. Dried blood is also one of the ingredients in the fertilizer mix I’ve been using, so I figured it wasn’t much worse than what I’ve already been doing. I bought two containers, and sprinkled them in and around the beds. This is what the blood is all about. I hoped it would discourage the chewing if it’s being done by small rodents, but I wasn’t entirely optimistic. Bloody ‘ell! Here goes nothin’. Sorry, dead piggies. Here’s what it looks like on the floor of the beds, with lovely white flax flower petals on top (four of the six types I am growing this year have white flowers, by the way, which will be the subject of another post). 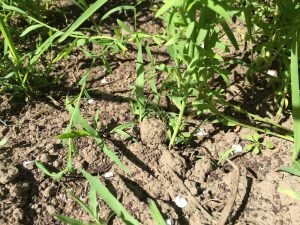 Then, I decided I’d better remove as much of the surrounding cover as possible considering the limits of my site (conservation land). Last year, the little test plots at the community garden were totally destroyed, but I managed to get on top of the chewing at the Brennan’s farm after they finished haying and after I weeded down to the soil…. Sorry critters, but I want the owls and hawks and whoever else is out there to eat you!!!

I said in my last post that I can’t clear-cut, but I did chop away pretty heavily. Here are some before and after pictures. Here I had chopped away with clippers but not yet raked. 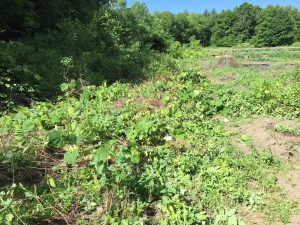 Here is the giant mint that encroaches more every season: 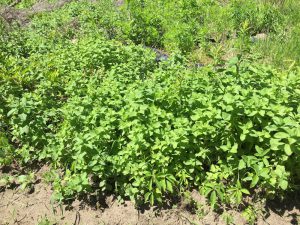 Here is how it looked after chopping and raking: 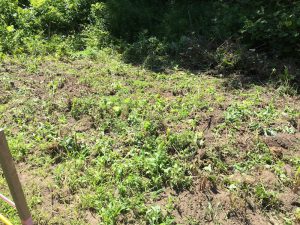 Here’s a slightly wider view (that’s woad on the right, flax on the left): 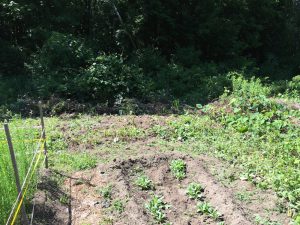 OK, not too bad. I gained about ten feet, maybe more, of relatively open ground on this side of the plot. I figured I could go back and clear out some more, even, once my blister heals over. On Tuesday morning, I was cautiously optimistic.