The Plantskydd did nothing to stop the chewing of my flax stalks, unfortunately. So, I wondered if perhaps it might not be rodents after all. What if it was insects, for example? I sent out inquiries to various flax-growing contacts, and to the UMass Extension folks. Many thanks to flax and linen study group friends Faith Deering and Carolyn Wetzel (with expertise in entomology and botany, respectively), to Tawny Simiski (entomologist at UMass Extension), Alvin Ulrich at Biolin, and Ken at the Crop Development Center in Saskatoon for their suggestions. My favorite suggestion was that “flax beavers” were using flax fiber to build dams, but I also liked the idea of a night-vision camera to catch the culprits in action.

One suggestion that I latched onto was cutworms, which I have experienced in the past so I knew what to look for. Another was Bertha armyworms, which I had never even heard of, and seemed unlikely around here (Saskatchewan has a very different climate than Amherst, MA). They are also a type of cutworm, but they can climb! My culprits were not just chewing at the bottom of the stems, so perhaps they were climbers. 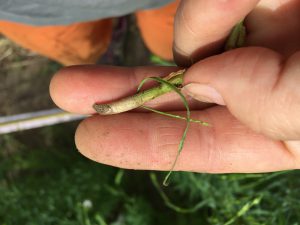 On the other hand, flax has pretty shallow roots, and the transition from lower stalk to upper root is not that definitive.

How to find hard evidence of the culprit was not obvious (in the absence of motion-sensor cameras, which I do not possess and couldn’t really justify buying), but I figured I’d look for signs and simultaneously treat my plots as if I was dealing with soft-bodied larvae. Because it would, in fact, be larval stages of the worms that would chew plants. The adults are moths, and they would not be doing any flax-chewing.

Step one, dig down into the soil at the base of the plants that are affected. I dug down around the sad little stumps of the stalks, but found nothing. Wait, here’s a small hole! Does it mean anything? Who can tell? 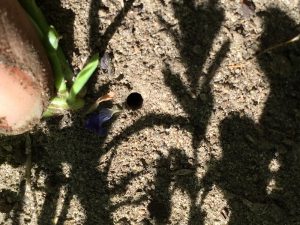 Also, I found this: 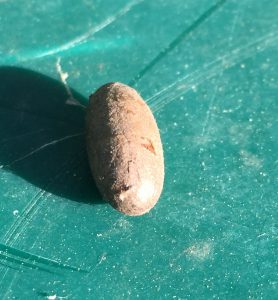 What is it? No idea. Is it evidence? Maybe. Does it matter? Who knows. Finding this reminded me of the scene in Life of Brian when the Roman soldiers are searching the home of Matthias (twice), and one of them reports, “Found this spoon, sir.” “Well done, sergeant.” Not exactly a relevant detail. Found this pellet-like thingy. Well done, Michelle.

Step two, remove all the ground cover around the plants. Well, I had made a valiant effort to do this already, but I turned over the soil in the pathways between the beds with a fine-toothed pitchfork, and found exactly 5 cutworm larvae (which I squished). I confirmed their presence, but I do not think this constitutes an infestation. When you first uncover a cutworm, they are all curled up like so: 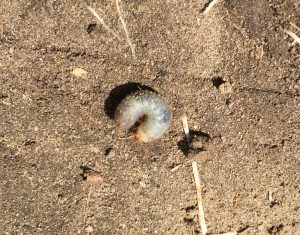 They look harmless and defenseless. If you ignore them for a second, they unfurl and hustle away with haste: 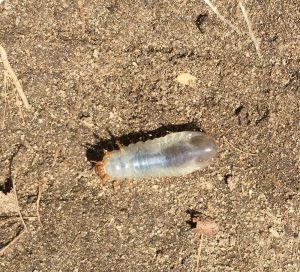 They are definitely sneaky and deceptive, but I wasn’t convinced that cutworms were the problem. However, in case there are hoards of sneaky cutworm larvae (or armyworm larvae) that remain undetected in the garden, proceed to step three.

Step three, deter and if possible, kill the creatures. I spread out diatomaceous earth. This is composed of the sharp exoskeletons of long-dead, teensy diatoms, and we have it on hand for dealing with fleas at home. Because the diatoms’ exoskeletons were made of silica, which is sharp and glass-like, the dust has very sharp edges on a micro-scale. Soft-bodied insects and insects with exoskeletons themselves are negatively impacted, shall we say, by the razor-like edges of the particles. 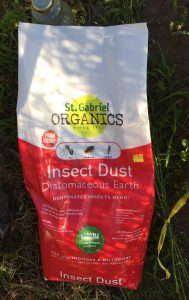 It works best when dry, so you have to re-apply after rains or watering. Rains? Ha! No such luck. 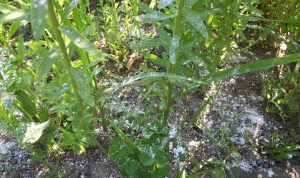 I sprinkled it all around, liberally, and reapplied three times. No effect whatsoever. That lack of result combined with the lack of obvious larvae infestation led me to conclude that it wasn’t armyworms or cutworms.

So, thus far, none of my attempts to deter or kill the culprits were successful. I persevered in my efforts to defend my flax plants, undeterred by repeated failure (but pretty sad about it nevertheless).