By late June I had not definitively proven that rodents were eating my flax, but I was pretty sure it wasn’t insect larvae, as I said in my last post. Stalks were being chewed daily, between 4-6 stalks per bed, per day. Sometimes more. So, additional sleuthing was required.

I continued to pay close attention to anything that might be suspicious and tried to document anything I saw just in case it turned out to be a problem. It turned out there were a lot of flying insects on the buds, flowers, and newly-forming seeds.

There was also some minor wilting and withering at the tips of the stems, which may or may not have been caused by bugs. The withering was negligible compared to the chewing problem so I didn’t put a lot of effort into figuring out what most of the insects were. 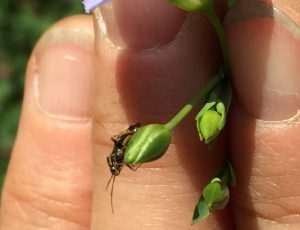 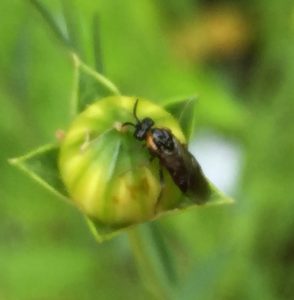 Here’s one that seemed to just be looking for nectar: 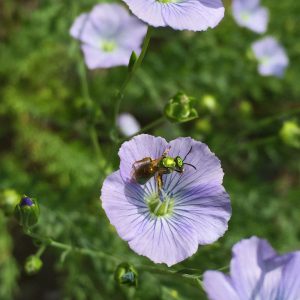 And here’s one that I was pretty sure was harmless. I’d seen it before on milkweed, and didn’t figure it could do any harm to my flax: 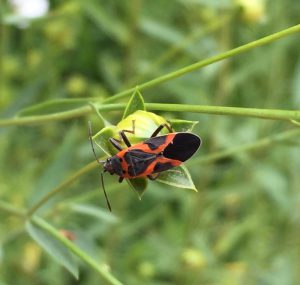 Here is another view of a milkweed bug: 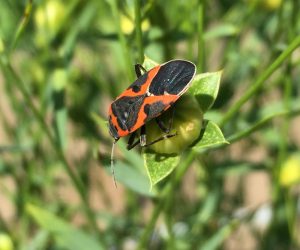 Over roughly a week’s time, I started to see more and more of these milkweed bugs, and they were always on the green seeds. In contrast, there were none on the actual milkweed in the garden (which I leave there in the hopes that a monarch might fly by some day). This seemed weird, so I looked up milkweed bugs. I found this page provided helpful information. They come in two types. Large milkweed bugs feed almost exclusively on Asclepias species. Small milkweed bugs are less picky and will feed on a lot of different plants. Both types stick a special eating tube into the seeds, squirt in digestive enzymes, and then suck out the liquefied seed material through a different eating tube. Great, that’s just what I need. Insects liquefying my seeds at the top of the stalks and chewing creatures mowing down and snipping up the stalks from the bottom. So, I started squishing all the milkweed bugs.

Meanwhile, I decided to operate on the assumption that the big chewing problem was caused by rodents. At first I thought all the chewing was happening at night, so I read up a little on rodent habits. I ruled out chipmunks (diurnal) and figured it was voles (nocturnal).

During the last week of June and first week of July, I set out a couple traps overnight in the beds. One night I caught a deer mouse, and another night a white footed mouse. I had baited the traps with peanut butter, and Matthew pointed out that perhaps they were after the peanut butter and not the flax. So, I put out unbaited traps. I caught nothing for days, until finally over the weekend of July 9-10 I caught a vole. This did not narrow down the list of suspects. However, in the course of reading up on rodents, I discovered that a single vole can have a hundred babies a year, and that an acre of meadow can provide habitat for as many as 300 voles. During these weeks, I started visiting the garden twice a day, morning and night, and realized that the flax-chewing occurred both during the day and over night. Basically the odds of winning my battle against rodents were nil. I was not ready to give up yet, though.