I read that a chili pepper/garlic spray would keep rodents away from plants, so I gave it a try. We grow a lot of chilis. A major goal of our gardening endeavors, besides growing flax and dye plants, is to grow tomatillos and chilis to make home-made salsa verde. We also grow garlic for the salsa, but it’s too precious to use for mouse-repellent so I just used store-bought garlic. I divided them between two 12 ounce canning jars, and added a head of minced garlic and water. I let them sit overnight and then blended them. To make the spray, I strained out the solids and added extra water. 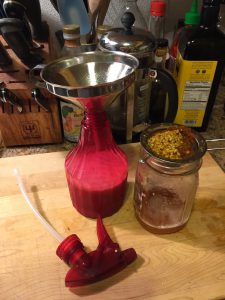 I used this quantity of chilis and garlic two or three times with additional water before starting a new batch. When I felt a jar had lost its oomph, I dumped out the remaining solids around the beds. One recipe called for a little soap or oil to break the surface tension of the water, so for the first two batches I added a little Dr. Bronner’s castille soap.

At first I sprayed just the lower parts of the flax stalks, where the initial chewing was happening. The M.O. of the chewers is to cut off the stalk at the base, then chomp it into little sections. However, the lowest leaves on the plants did not look happy after I sprayed them. They got spots and then shriveled and fell off. So, I omitted the soap after that.

At first, it seemed that the chili-garlic spray was helping. For a few days there seemed to be less damage, and I was very excited. Then, a few days later there was just as much chewing, and the chewers seemed to be severing the stalks a little further up to avoid the spray. So, I started spraying willy-nilly over the entire bed. I also shook garlic powder all over the beds and pathways a couple days in a row. No help. Meanwhile, I continued to lose plants every day.

Matthew suggested digging up some of the flax plants and bringing them here to the apartment for protection. I wasn’t sure they would transplant, so I didn’t try it right away. I was getting desperate, though, so I dug up two patches from each of the two tallest types, 5NN and Peynau, and plopped them into five gallon buckets. It is a bit of a walk from the community garden plot to the parking lot, and they were heavy to haul. I carried out the four buckets over two days.

With a portion of the flax safely ensconced at home, we went away for the weekend of July 9-10th. We returned to a scene of destruction. A majority of the green seeds had been chewed off. Here’s some of the seed debris on the seat of a chair: Some of the seed pods were hollowed out: 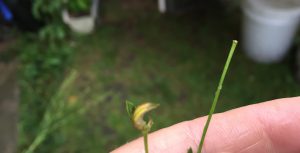 Others were just missing: 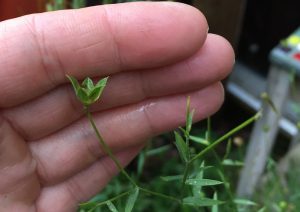 It could have been squirrels, birds, mice. Who knows what. We were not here to observe, witness, defend, or protect. AAAARRRGGHHH!!! Yes, I had a major meltdown.

Once I began to return my normal self a little bit, this scene from a Louis C.K. skit popped into my mind and somewhat captured my feeling (N.B. video contains swears!). We keep a birdfeeder outdoors, with a lot of seed that spills on the ground. Plenty for birds and squirrels alike. “I left food on the floor!” Why did you have to eat my flax seeds?! Lesson learned, though. There is no safe harbor anywhere for the beleaguered flax.

Stated differently and more positively, I have now established through repeated observations that flax is a preferred food source for a range of animals, even when other sources of food are available. Both stems and immature seed are consistently sought out, despite deterrents and repellents, and despite easy access to other food.