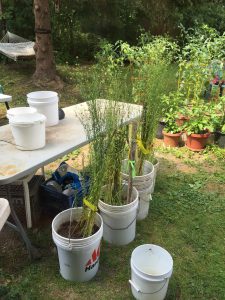 I realized in my last post I didn’t show the buckets of transplanted flax. They transplanted just fine, which was a useful discovery.

After we came back from our weekend away on July 9-10 and found that the seeds in the buckets of flax at home had been chomped, I bought two new types of rodent repellent and a solar robotic owl for the garden. The first type of repellent I tried, Bobbex-R, stinks to high heaven! I wanted to run away from it myself as I was spraying it. We have been having a sustained spell of very hot weather, and the directions said not to spray when it’s over 85 degrees, so I waited to spray the plants at dusk when the temperature cooled off a little. It was initially more effective than the Plantskydd. I didn’t detect any new damage overnight. After a day or so, though, things went back to normal. Sigh.

Here’s a photo of my owl when I first brought it to the garden. 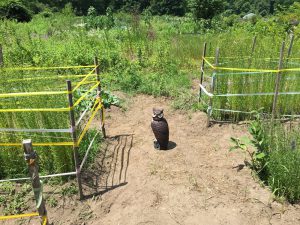 Even though I bought it out of desperation, I love my robotic owl beyond all reason. It is solar powered, and has a teeny solar panel on its head. It has a bobbly head that moves around randomly when it’s not catching rays, and moves systematically and robotically when it is. In case you haven’t seen this video, please watch and enjoy: “Move your owl around for sci-ence!” In my case, since it is solar powered, “I rotate my owls auto-matic-al-ly!”

I have been moving my owl around every couple of days, as directed, so the rodents don’t get complacent. Here it is the next day up on a perch: 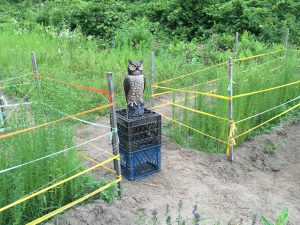 However, it isn’t helping. The stalk-chewing continues. Even though the seeds are just beginning to ripen, the seeds are being chewed up now, too. Certainly by rodents and milkweed bugs. Perhaps by birds or other animals. There is seed debris all over the ground in the beds.

On July 7th I had noticed that one of the flax chewers had pulled a stalk out of one of the beds (the type Ariane) and dragged it across the dirt pathway toward a patch of grass. 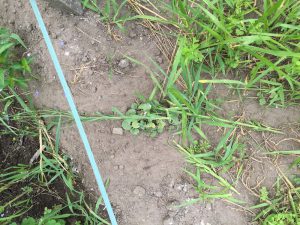 I thought, “Hm, that’s odd. I wonder what that’s about.” I also thought, “Must be a rodent. A cutworm certainly couldn’t accomplish this.” It wasn’t until July 12th, however, when I found another dragged-off stalk outside the bed that I followed the route a little further. Under the longer grass was a stash of flax-stalk pieces: 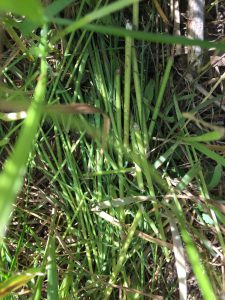 I imagined the little critter feeling exposed in the increasingly empty bed, and finding a more sheltered spot to eat. Or, cutting down the stalk despite the sting of chili and smell of garlic, and dragging it off to a less odiferous spot to finish chewing. I dug up all the grass in that area and turned it over to dry out and die. 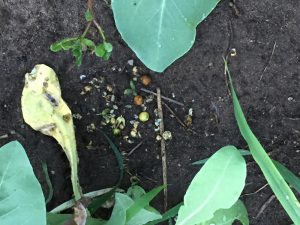 I also noticed some chewed up stalks: 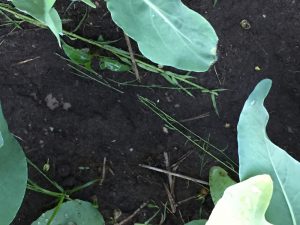 I sprayed some Bobbex-R around the woad. Over the weekend I was out of town visiting with family.

On Monday July 18th I was picking woad for a woad vat. I realized that there were a LOT of chewed up flax stems in the woad bed, far more than I had noticed before. 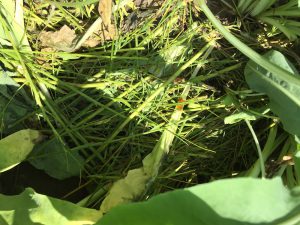 There were also a lot of chewed off woad leaves. 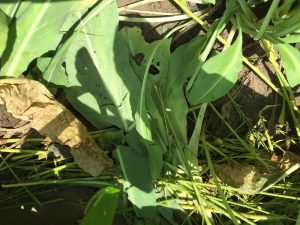 This was totally uncool. In fact, it was the last of my final straws. My final final straw. Despite my efforts, I am losing the flax fight. I am done with this. I give up.

I pulled up all the flax in that bed right then (the type 1602). It has no chance of surviving until the seeds are ripe. Meanwhile something is thriving on it, and chomping up the woady-brassica-goodness next door to boot. Enough is enough.