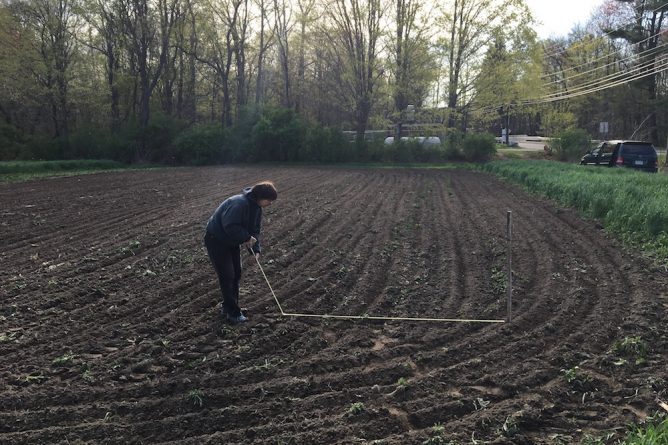 On Sunday April 30th I planted this year’s flax crop. Thanks to the generosity and support of Bernard Brennan at Amethyst Farm and Jeffrey Silberman in the Textile Development and Marketing Department at Fashion Institute of Technology, I am going big this year. Well, big for me. Up until now I have never grown much more than 225 square feet in a given season. This year I have planted approximately 1500 square feet!

Last summer at the Flax and Linen Symposium, Jeff donated a 25 kg box of flax seed to our study group. That’s about 55 lbs. if you’re more of an imperial measurement person, like myself. It is a type called Electra which was grow at Biolin in Saskatchewan, Canada. It is from 2012, so it is a little on the old side, but Jeff has been growing crops from the same shipment since then, and it has worked well for him. 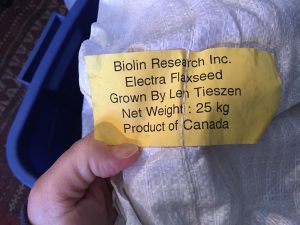 Jeff recommended planting more densely than usual to account for the decreased germination rate that one might expect from older seed. At the rate that the Zinzendorfs recommend (a pound per 100 square feet), I would have put in 20 lbs. for a 2000 square foot plot. I decided at first to plant 20 lbs. in 1500 square feet, and hope that was dense enough.

Bernard was kind enough to disc harrow the plot in mid-April, in a plot next to some of Many Hands Farm Corps‘ CSA fields. He went over the plot again with a spring tooth harrow and culti-packer on April 29th, and we met on the morning of April 30th to plant.

Here I am measuring out the plot: 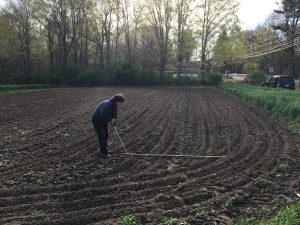 We marked the corners with stakes. I decided to try spreading the seed with a seed spreader rather than broadcasting by hand, as I usually do. I thought it might be quicker and might help me to spread more evenly. When I do it by hand, I tend to get clumps and bald spots. Bernard lent me a spreader for the occasion. You hang the bag around your shoulders, and can adjust the size of the opening through which the seeds fall out the bottom. On the left you can see the gauge for adjusting the opening. On my first pass I had it set too small, so I opened it a little wider for the rest of the process. You turn a crank on the side to spin a little blade that disperses the seed as it falls:

Becoming skillful with this tool would take some practice. Since this was my first time using it, I am not sure if I was able to sow any more evenly than usual. But, it was a good learning experience. I walked up and down, around and around, and back and forth until all the seed was spread. Twenty pounds of Electra filled 4 gallon sized zip-lock bags, in case you’re wondering. Each bag weighed 5 lbs. I started with a 5 lb. bag, then put in 10 lb. for the next pass, and the last 5 lb. bag for the third pass. 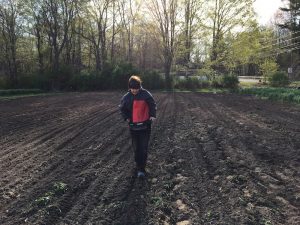 Then, Bernard went back over the whole thing a few times with the spring tooth harrow plus culti-packer  to work the seeds down into the soil and press the seed bed to make it a little flatter. 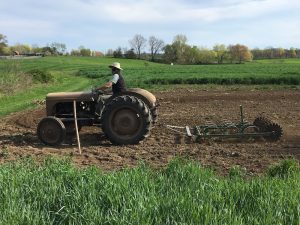 Here’s a closer view of the equipment: 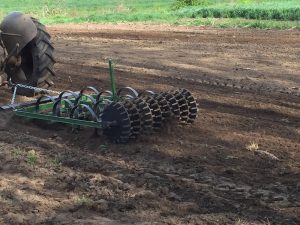 Later that day it poured with rain, and we had cool, rainy weather all week, which meant I didn’t worry about water. I took this as a good omen!