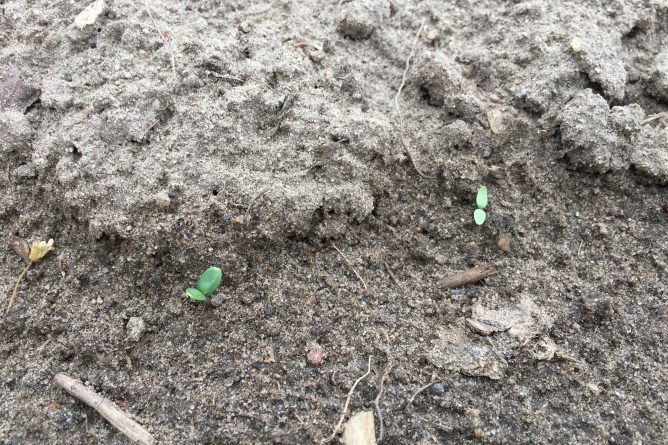 While I weeded the flax plot on May 6th, I was simultaneously glad for the opportunity to dig out the campion, and worried about weed pressure later in the summer, and worried that nothing had come up yet. So, I decided to spread another ten pounds of seed. There were a few reasons for this. First, I was worried that I hadn’t accounted enough for the possibility that I’d get a really low germination rate. Second, the more densely the flax is planted, the less the stalks ought to branch as they grow. Third, the more crowded the plants are, the finer the stalks will be and theoretically the finer the fiber will be. Fourth, a dense stand of flax might, hopefully, crowd out weeds.

I decided to just hand-broadcast the new seed. Then, I worked it in with my newly acquired Garden Weasel, procured from Hadley Garden Center. In the photo below I am about a quarter of the way down the plot. The darker soil to the right has been worked over: 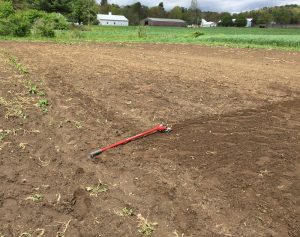 As I worked the Garden Weasel through the soil, I became more intimately familiar with the crops that were grown on that site last year: 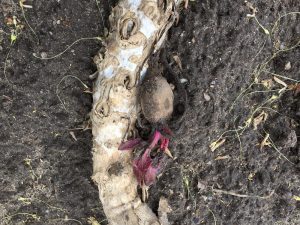 Once I had worked over the whole plot, I walked around on it to pack it down more firmly. There were still quite a lot of seeds on the surface of the soil, but I hoped that the majority had been worked under. Recommended planting depth for flax is between a half inch to an inch. Any deeper than that and they might not be able to emerge at all. So, I decided to err on the side of too shallow.

That night, it rained heavily again, which was a relief. For the rest of the week, I worried about whether I had disturbed the seeds from the first sowing date, and perhaps made matters worse with all my fussing and re-working of the bed. The weather was dry but very cool. Finally this morning, May 13th, there are some seedlings emerging! 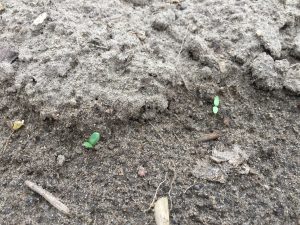