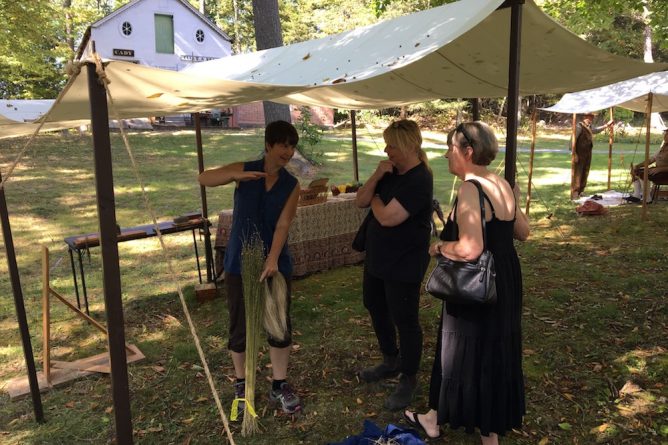 On Saturday September 23rd, I demonstrated the flax-to-linen process at Historic Eastfield Village’s Founder’s Day celebration. It was a lovely day! We had a heat wave later that week, but under the oak trees that day it was pleasantly cool and shady.

I brought dried flax stalks with the seeds on, retted flax, and all the tools to break, scutch, and hetchel the fibers. I also had some commercial linen yarns that I dyed with madder, weld, woad, and black walnut.

Historic Eastfield Village is a very interesting place. You can read more about their history, buildings, and classes on their website. Last year, I attended Founders Day with Lisa Bertoldi, on the invitation of Niel DeMarino of the Georgian Kitchen, whom we had met at the Flax and Linen Symposium in August 2016.

This was my favorite image from Founders Day 2016: 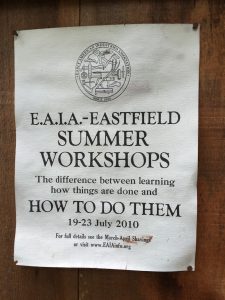 It really captures what motivates me, and what I aspire to in my own knowledge and skills. Not that I am always successful! Still, words to live by.

Last year I got to wander all over the site and take photos of various artisans and craftspeople at work. Here’s the printer, for example: 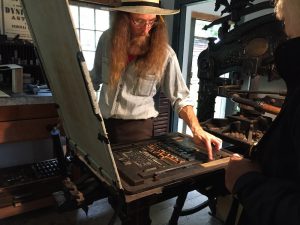 This year, I didn’t get to see all the other demonstrations and vendors at work. But I did get to talk to a lot of interesting people!

Early in the morning, things were slow. So, I started breaking flax to see if I could lure people over to the tent. 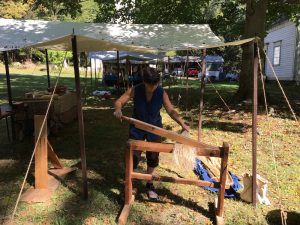 It worked! Some of the other demonstrators and living history folk came over to visit. 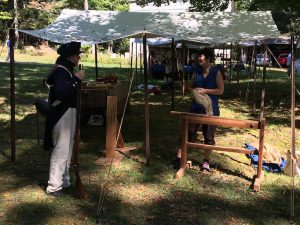 This fellow, Henry Cooke, is a well-known 18th century tailor, but was there in his capacity as a militia member from the early 1800s. He was at Historic Deerfield the following weekend, as part of their Historic Trades series.

And there were lots of regular non-historical people, too:

In this photo I look like I am telling a tall fish tale. “It was this big, I swear!” Actually, I am describing the height that fiber flax can reach under ideal conditions: 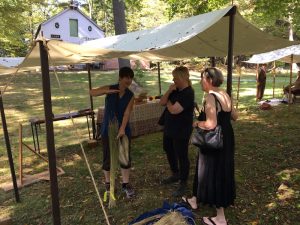 Here I am explaining the dyes I used to make these colors: 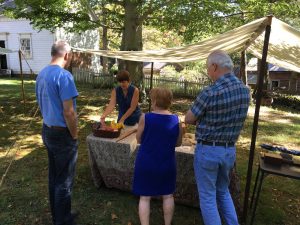 Matthew took some better crowd shots, which you can see on the New England Flax and Linen‘s recent Facebook post.