Life has been very busy. Back in July I kept thinking, “July is the month of everything.” Dye plants blooming, flax needing to be harvested, NEH summer institute, NEWS, family weekend at Queen Lake, hiring a new co-worker at school…. I did a lot, but since I can’t do everything, I had to let a lot of things go. No goldenrod or Queen Anne’s lace dye baths this year, and I missed Peggy Hart‘s talk on the history of NEWS, for example.

Then when August came, I thought, “No, August is the month of everything.” Even *more* dye plants blooming, flax *really* needing to be harvested, prepping for school, getting to know my new co-worker….  I did a lot, but ditto July. I had to let a lot of things go. No flax retting experiments. No purple loosestrife or black walnut experiments, despite an absolutely ridiculous abundance of wild dye plants. Very few orange cosmos flowers were collected and frozen. No woad was cut or dyed with. The flax and linen study group website was not updated.

September was a total blur. All I know for sure is that it’s over now. I gather that we are well into October at this point.

I think it was Bumpa, my paternal grandfather, from whom I first heard the phrase, “The hurrier I go, the behinder I get.” I’m not positive about my recollection of this, but it fits with the other sayings of his that I found mysterious as a child. For example, “You scream, I scream, we all scream for ice cream.” Also, “Mares eat oats and does eat oats, and little lambs eat ivy. A kid’ll eat ivy too. Wooden shoe?” None of these made sense to me at the time. But now that I am older, “the behinder I get” may as well be my personal slogan. Behind on life, and behind on writing about my life.

One thing I *did* do in September was run a second vat of Japanese indigo. September 6th, to be exact. Even there, though, the photo-documentation is lacking and signs of distraction are evident. It got hot. My brain stopped working. I can’t actually recall what happened. Cats are cute.

I do have photos that demonstrate a few useful piece of information.

First, the Japanese indigo plants I had harvested in August for my first vat were happy and perky. All their energy was still going to their vegetative stage of growth, despite hot weather and no water. Observe: 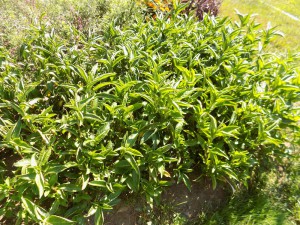 I conclude that harvesting Japanese indigo promotes more growth and prolongs the life cycle of the plants.

Second, the plants I hadn’t harvested in August were droopy. They had been hard-hit by the hot weather and my inattentive watering habits. Their energy was going into flowers and ultimately seeds, and lack of water was making them sad. Behold:

I conclude that not pruning the plants leads to a quicker transition to flowering and seed-setting, and plants put their energy toward that. It stresses the plants, or maybe makes the plants less resilient to environmental stress. I hypothesize that it shortens the life cycle. Both of the above photos were taken on the same day within moments of each other, under identical conditions. Pretty remarkable, right?

Third, new growth definitely does grow from the nodes or joints. Witness: 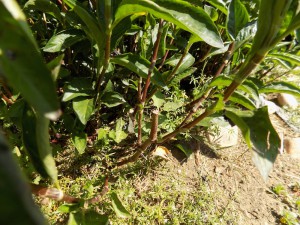 Fourth, even a faster, hotter heating process on our kitchen stove (because my portable electric stove was giving me shocks–not good) doesn’t produce any detectable shift in color in the leaves when they are extracted inside a closed canning jar. To whit: 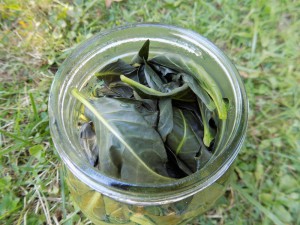 Fifth, once you allow air into the closed jar (and you poke it) you can see that something’s going on with the extraction (this is a replication of my data from August). See here: 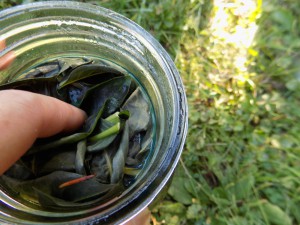 Sixth, the brown/tan color was again evident at the bottom of the jar where there was presumably less air than at the top of the jar: 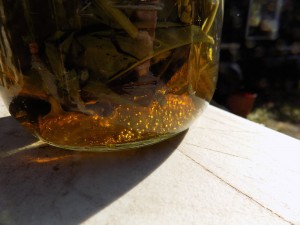 And then, it’s all about the Sammy Cat. I know I dyed a lot of yarn that afternoon, but apparently the cat was a lot more interesting. I have many photos of her curled up next to the chili plants under the spruce behind the apartment (where Matthew gathered them to keep them shaded and cool): 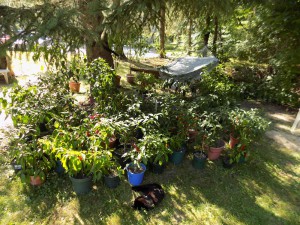 Sammy is the black curl in the foreground on the grass. She is a ninja and hard to see.

Apparently, my marigold garlands were also more interesting than my vat that day: 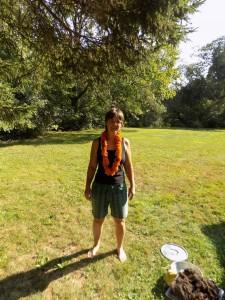 This is a fun way to pass the time in between dyeing steps.

It’s not that I wasn’t excited about my vat. I was. And it’s not that it wasn’t successful. It was. I overdyed the lightest skeins from the first Japanese indigo vat, and got excellent dark blues. I overdyed a lot of tansy-yellow skeins from my Massachusetts Agriculture in the Classroom demo last fall and got great greens. But you wouldn’t be able to tell that by looking at my photos. I thought I took photos, but apparently not.

You *can* tell which birds we were trying to feed at the time: 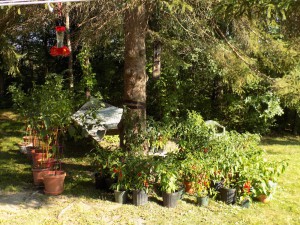 The hurrier I go the behinder I get. Or at least, the more distracted I get. What shall I conclude from this?